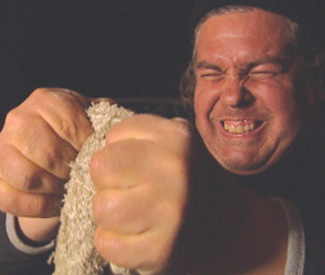 FILM “The male stereotype makes masculinity not just a fact of biology but something that must be proved and re-proved, a continual quest for an ever-receding Holy Grail,” wrote Marc Feigen Fasteau in The Male Machine, a 1975 Gloria Steinem-approved polemic (she wrote the introduction) that attempted to catalyze American men into joining their sisters in the women’s movement in reexamining and casting off traditional gender roles.

Masculinity of the variety rhapsodized by Ernest Hemingway and scrutinized by Fasteau is now something talked about in scare quotes (see Old Spice’s man on a horse) or presented as a relic of an earlier time à la Don Draper, even if magazines such as GQ routinely make it into a fetish object. Even a cursory scan of contemporary pop culture, from Drake’s broody makeover of hip-hop swagger to Will Arnett’s stay-at-home dad in Up All Night, shows that men today seemingly have more options, and consequently different sets of expectations, when it comes to being a man.

And yet, the ties that bind to that “ever-receding Holy Grail” still grip some men, causing fresh wounds and opening up old scars. It’s a struggle that runs through many of the remaining programs in Yerba Buena Center for the Arts’ ongoing series “Bros Before Hos: Masculinity and its Discontents,” a collection of leftfield representations of masculinity, often under duress.

The hitchhiking bisexual hustler at the center of Meat Rack (1968), a gritty piece of Gay Lib-era San Francisco film history, protests the loudest. Director Michael Thomas, who appears in person at the screening, has his boy-toy clanking his can against the prison bars of pop Freudian psychology as he works out his Mommy issues, turning tricks in Market Street cinemas (appropriate, given that Thomas owned the infamous Strand Theater and later founded its namesake, indie film distributor Strand Releasing). Although the film’s sexual politics are at times as confused as its protagonist’s, Meat Rack depicts with lysergic abandon the panic that can happen when the injunction to be a man is simply too much to bear.

That pressure is also touched on again and again by the various Finnish men Joonas Berghäll and Mika Hotakainen interviewed for their tender documentary Steam of Life (2011). Within the steam-filled confession booth of a sauna, men talk candidly and emotively about their lives, loves, and losses, their famous Scandinavian reserve seemingly melting away into streams of tears with each new puff of steam. “What are the options for boys?” a solider asks a bench-mate, reflecting on his inability to mourn. “Silence and drinking”

Steam of Life wears its nationalism, as well as its heart, on its sleeve, intercutting gorgeous long shots of the Finnish countryside between its in-the-buff interviews, and ending with a dedication, not merely to its subjects, but to, “all Finnish men.”

But the ballad of aging strongman Stanley Pleskun, a.k.a. Stanless Steel, as documented in Zachary Levy’s Strongman (2009), can be called uniquely American. Pleskun’ abilities are the stuff of classic tall tales — he can lift 10,000-pound trucks with his legs and hold aloft three adults with just one finger — even if his chaotic home life and uphill battle to keep his career going, sympathetically captured by Levy, is straight Arthur Miller. For all his might, Pleskun is at times painfully oblivious to his emotional shortcomings, making his quest for the ever-receding Holy Grail of fame and glory one of the rougher paths that “Bros Before Hos” traces.

“BROS BEFORE HOS: MASCULINITY AND ITS DISCONTENTS”