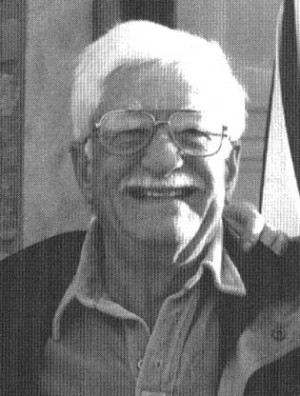 Nathan Blumberg, a great journalist who insisted on meeting deadlines, wrote his own obituary so that he would not miss his final deadline,  on Valentine’s Day, in 2012, when he died of complications from a stroke in Kalispell, Montana. Below is his obit,and his final byline, updated and corrected by Wilbur Wood, his former student and former city editor of the Guardian in the late 1960s.  Wood said that  Nathaniel wrote his own obit to insure that it would be complete and accurate. Nathaniel’s critique of mainstream journalism, and his  vision of independent journalism, were a major influence in the founding of the Guardian and the alternative press.

Nathaniel Blumberg was a World War II combat veteran, Rhodes Scholar, investigative reporter, national press critic, novelist, visiting professor and lecturer at major universities, dean and professor during his 35-year tenure at the University of Montana, and a man devoted to Montana for the last 55 years of his life.

He died February 14, 2012, at the age of 89 in Kalispell, Montana, where he had been hospitalized since a stroke February 8 in his home near Big Fork.

Born April 8, 1922, in Denver, Colorado, Nathaniel Bernard Blumberg was the eighth and last child of Dr. Abraham Moses and Jeanette Blumberg. His father was a country doctor in Siebert, Colorado, for many years and had moved to Denver with his family to serve as superintendent of a tuberculosis sanitarium.

Nathaniel grew up in the west side of Denver with his four brothers and three sisters in a vibrant home filled with newspapers, magazines, books, music and long discussions of current events at the dinner table. He was graduated from East Denver High School after covering the city’s high school sports for the Rocky Mountain News while a senior.

His education at the University of Colorado was interrupted by the attack on Pearl Harbor and in August, 1942, he enlisted in the Army. After basic training, he was sent to the Army Specialized Training Program in Logan, Utah, and then to Camp Bowie in Texas. He was assigned to the forward observation team of Battery C of the newly formed 666th Field Artillery Battalion, a 155mm howitzer non-divisional unit trained to change mission on short notice. The Triple Sixes entered the war during one of the coldest winters of the century in Belgium against elite German SS troops in the Battle of the Bulge, the largest land battle in the history of the United States Army. The battalion then drove across the Roer river and the Rhine, through the heart of Germany and into occupation in Austria. He earned three battle stars and a Bronze Star in combat.

Shortly after VE Day in 1945, he published the first history of a unit in World War II, “Charlie of 666,” which he had begun writing when the battalion was formed in 1944. With his poker winnings and combat pay, he published the 32-page booklet in a German print shop and distributed it to members of his battery to send home.

After the war he returned to the University of Colorado, was named editor of the student newspaper and received a bachelor of arts in journalism and a master of arts in history. He was awarded a Rhodes Scholarship for two years of study at Oxford University, where he earned a doctorate in modern history under the tutelage of the internationally known and controversial historian, A.J.P. Taylor. He was a starting guard for Oxford in the first Oxford-Cambridge basketball game ever played in 1949.

Nathaniel was an assistant professor of journalism at the University of Nebraska from 1950 to 1955, when in 1954 the University of Nebraska Press published his “One-Party Press?,” the first significant study of press performance in a presidential election. He went to Michigan State University for a year as an associate professor and in 1956 at the age of 34 he was brought to the Universty of Montana by President Carl McFarland to become dean and professor of the School of Journalism. He served under four presidents and two interim presidents during his 12 years as dean.

He established the annual Dean Stone Night in 1957 to honor the founder and first dean of the School of Journalism, to present awards to outstanding students and to bring a prominent journalist to lecture on the campus, a tradition still followed.

He formed the Department of Radio-Television in 1957 and brought in Phil Hess to put KUFM on air Jan. 31, 1965, six years before National Public Radio was begun in 1971. He has been called on air “the grandfather of Montana Public Radio, a public service of the University of Montana.”

Shortly after the inauguration of President Kennedy in 1961, the U.S. State Department asked him to serve as an “American Specialist” in Thailand for the summer. Three years later, under President Johnson, he again served in the same capacity for the summer in Trinidad, Guyana, Surinam and Jamaica.

He was elected vice president of the American Association of Schools and Departments of Journalism in 1962, declining to run for president because it meant he would be sponsoring a national journalism competition he and his faculty regarded as unethical. He was elected national chairman of the accreditation committee of the American Council on Education for Journalism in 1967 and national president of Kappa Tau Alpha, the society honoring scholarship in journalism, in 1969.

Nathaniel was a staff writer for the Denver Post, associate editor of the Lincoln (Neb.) Star and assistant city editor of the Washington Post. He accepted invitations to serve as a visiting professor at Pennsylvania State University for fall quarter of 1964, Northwestern University’s Medill School of Journalism for the 1966-67 year and the Graduate School of Journalism at the University of California at Berkeley in 1970.

He married Lynne Stout in 1946 and they had three daughters, Janet Leslie, Jenifer Lyn and Josephine Laura. They divorced in 1970 but remained a close family. Their children and grandchildren gathered in Missoula on many occasions and spent long summers on the east shore of Flathead Lake.

Starting a new life in 1970, Nathan took the full name of Nathaniel on his birth certificate. In 1973, he married Barbara Farquhar, a college English professor and a widely published poet, who came to Missoula with her daughter, Nina. Barbara introduced him to Newfoundland dogs and they shared their 34 years together with seven Newfies (and a wolf with a touch of dog in her from the Helena hills). They enjoyed traveling together to beaches and fishing villages in the Canary Islands, Morocco, Spain, Portugal, Nova Scotia, and frequently to Florida, Mexico, Costa Rica, Orcas Island and the central Oregon coast. They balanced these adventures with quiet periods of writing in the cabin they designed and helped build near Big Fork.

In 1980 he established WoodFIREAshes Press to publish books which he hoped to write, edit and design without commercial publishers, editors or agents. He crafted “The Afternoon of March 30, A Contemporary Historical Novel” in l984, which centered on facts never reported by mainstream newspapers or on television about the attempted assassination of President Reagan by John W. Hinckley Jr. It received many warm reviews except for the Missoulian reviewer who didn’t care for the book although he termed the chapter on Hinckley’s trial “riveting.” Bud Guthrie wrote that he had “written a pretty bad novel but a forceful and persuasive book.” Doris Lessing, years before she was awarded the Nobel Prize for Literature, wrote Nathaniel, “I have read ‘The Afternoon of March 30’ with fascination. I really could not put it down, once I had started. If you ever come to London – and why should you, if you live in Montana, which I understand from friends of mine is one of the special places – then do let me know.”

Nathaniel rarely spoke of his part in World War II until 19 survivors of his artillery battery gathered for a reunion in 1992 and urged him to write the uncensored story of their time at war. He returned to Belgium and Germany three times, including a three-day meeting with 32 German veterans of the Ardennes battle. In 2000 he published “Charlie of 666, a Memoir of World War II,” which included his 1945 history and his recollections on the war 55 years later. It was nominated for the 2002 Distinguished Book Award of the Society of Military History.

From 1991 to 1999 he published 20 issues of the “Treasure State Review, A Montana Periodical of Journalism and Justice.” Many of his graduates contributed to the 12-page newsletter. It served as his commentary on that decade of Montana history.

He wrote many articles for magazines, but he was most proud of his coverage of the “March on the Pentagon” in 1967 and his long essay, “Chicago and the Press,” based on his time on the streets and in the parks covering the protesters during the chaotic week of the 1968 Democratic National Convention. He was co-editor with Warren Brier of “A Century of Montana Journalism” and editor of the two-volume “Mansfield Lectures in International Relations.”

He was a demanding teacher with high standards who encouraged his students to live up to the highest principles of the journalism profession, to treat their native language with accuracy and affection, to always be skeptical but never cynical, and to remember that “sacred cows make the best hamburgers.” He was teacher, friend and counselor to hundreds of his students and took great pride in their professional success, their contributions to journalism in Montana and the nation, and their strong sense of public service in their chosen careers. They have written an extraordinary number of books. Scores of his graduates became lifelong friends.

Nathaniel was outspoken and had strong opinions. When he was honored by the Montana Newspaper Association along with Mel Ruder of the Hungry Horse News and Hal Stearns of the Harlowtown Times as the first three Master Editor/Publishers in 1991, he told a cheering audience of weekly journalists that “I am just as proud of the kind of people who don’t like me as I am of the kind of people who love me.” At the 25th anniversary of the Montana Constitutional Convention in Helena in 1997, his critique of the Montana daily press drew the longest standing ovation of the meeting.

His beloved Barbara Ann died of a stroke on the Autumnal Equinox, Sept. 21, 2007, a few days before her 73rd birthday. He also lost his youngest daughter, Josephine Loewen, in a tragic accident on Jan. 7, 2001, at the age of 46.

He spent his last years in his cabin working on a book, including a chapter on “My 30 Years With John W. Hinckley, Jr.” in which he named Neil and Sharon Bush as co-conspirators in the attempt to assassinate President Reagan.

He requested no formal services and that his ashes be scattered with those of Barbara among the trees around their home near Big Fork.