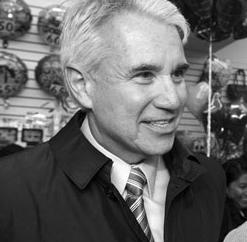 Well, Ms. Pak thinks he is. At the Chinese New Year parade, where she wields the mic at the reviewing stand and typically makes nasty comments about local politicians, she was relatively muted this year –– except when D.A. George Gascon rode by. “I read in the blogs that you’re still investigating me,” she shouted. “What the hell did I do? I just elected the first Chinese American mayor. You will find nothing, except that I swear a lot.”

Gascon has for more than four months been investigating irregularities in the Ed Lee campaign, including charges of illegal campaign contributions and voter fraud. Gascon’s office issued a press release Feb. 14 announcing the indictments of Go Lorries and two of its senior employees. The airport shuttle outfit allegedly laundered campaign money by asking its employees each to donate the maxium $500 to Lee’s campaign and then paying them back from company funds. From the release:

The defendants are accused of making an unlawful $11,500 campaign contribution from GO Lorrie’s to the Ed Lee campaign by passing it through GO Lorrie’s drivers and staff. … “Campaign finance and disclosure laws help to ensure fairness and transparency in our elections,” said District Attorney George Gascón, “and my office takes the violation of these laws very seriously.  After a thorough investigation, we have found clear evidence to charge Go Lorrie’s and two of its employees with making illegal campaign contributions.”

Nobody from the Lee campaign has been charged with anything.

So what about the other apparent violations? Is that still under investigation? Is Rose Pak a target? I asked Stephanie Ong Stillman, Gascon’s spokesperson, and she told me that she can’t confirm or deny that there’s any further investigations under way or that any specific individual is under investigation.

So I’m glad to see the Go Lorries indictment, which marks a rare instance of somebody taking campaign laws seriously. But there’s a lot more here, and I hope Gascon doesn’t think that nailing one company that everyone will insist acted on its own with no support from or connection to a pretty darn sleazy campaign will end the controversy.