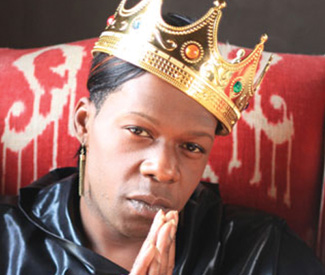 Editor’s Note: Unfortunately this show has been cancelled due to Big Freedia’s health. We wish her well and hope to see her again soon! Please read this revealing interview with her multi-talented DJ and producer, Rusty Lazer.

NOISE POP Despite its continual popularity in New Orleans for the last 20 odd years, it’s been a while since the regional, uptempo, call and response driven style of dance music known as bounce has appeared on a national level. The Juvenile (featuring an adorably young Lil Wayne) track “Back That Azz Up” may be the most recognizable hit, but not the most representative of the genre, especially the rising queer-friendly subsection that Big Freedia rules as “Queen Diva.”

Appearing in her nationwide debut performance on Jimmy Kimmel Live! last month, Big Freedia, born Freddie Ross, possibly brought bounce back into the lives and sets of people outside of NOLA, but they may not have been getting the whole picture. “I get a lot dirtier when it’s a club performance, and I can really get raw,” Big Freedia said in a phone interview last week, “but that was for TV so it was a little more PG.” Freedia, who answers most questions with Southern politeness and a “Yes, sir,” is nothing but grateful for the experience in which her dancers worked with “one of Beyonce’s choreographers,” Frank Gatson, for the segment, but to an observer at all familiar with her reputation for wild live performances, it was pretty tame.

In part it was just a matter of skin. One of Big Freedia’s signature songs at this point is “Azz Everywhere” and it’s the scantily clad dancers in particular that bring the idea to life, making moves and taking positions not unlike a 2 Live Crew show (or the Kama Sutra). We’re talking booty bumping, full splits floor humping, upside down synchronized air thrusting, and other gyrations typically reserved for strip clubs near airports and really great office Christmas parties.

For Big Freedia, who comes with her own crew of male and female dancers, call and response isn’t just lyrical — meaning that when she yells “I got that gin in my system” you should probably retort “somebody gonna be my victim” — but also that people might get called out for not getting down on the dance floor. At her shows, “everyone is involved.” Big Freedia said. “Whoever wants to get onstage can get a chance to come on stage. I’m very connected with the audience so I try to make everyone involved.” This interaction with her audience was the other thing missing from the Jimmy Kimmel performance, where a crowd looked on more as spectators than participants. For her part, Freedia tries to meet people at her shows halfway, saying “I can’t put them all on stage so I have to put myself on the floor with them.”

Effort means a lot for Big Freedia, who has long been known for doing shows at least six nights a week in New Orleans and continues to run a successful decorating company. She considers it part of her message that one can “Make the impossible happen being gay. Working really hard at things you have dreams behind and succeeding no matter what color, creed, walk of life.” Idealistic as that is, it also explains in part her egalitarian approach to dancing. Unlike some artists (::cough:: Sir Mix-A-Lot ::cough) it’s not about a certain type of butt; everyone’s got one, you just have to know how to bounce it. And if you don’t know that, well, she also offers classes.