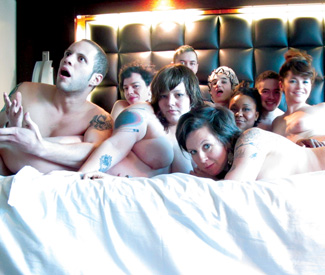 Most of the adult film aficionados present that Saturday afternoon in January had probably heard of the object of St. James’ affections, Belladonna, well-known in the industry for her gonzo-style sex and smoldering-pixie looks. Perhaps fewer of them would have been familiar with St. James, though the Amazon-esque beauty has an eponymous strap-on model and has done scenes for one of the nominees for the Best Alternative Website award, to be presented that night at the awards ceremony.

Later that day, we sit outside a Hard Rock coffeeshop with a handful of St. James’ co-stars from the AVN-nominated, San Francisco-produced QueerPorn.TV. I ask her how her fangirl experience went.

“I couldn’t believe it!” St. James exclaimed. “I got to the front of the line and was bending over to put down my bags when I hear this voice go ‘Sophia St. James.’ And I look around and Belladonna is saying my name!” The two exchanged gropes, business cards, and the promise to keep in touch. St. James was beaming.

“Politically, trans visibility, queer femme visibility, and feminism are all very important things to me,” says Trouble, for whom 2012 marked her fourth year in Vegas for the AVNs. “If I didn’t do this every year and try to get as many folks as I could out there on the floor, a lot of us would just dissolve into the background of the industry. Every year I’m like, I’m going to rip this year a new one.”

Lumpkin falls into that middle part Thorne was talking about. Queer she is not — she shies from the term and is also uncomfortable with “dyke,” attributing her preference to her religious upbringing in Carrollton, Georgia (she says her move to New York five years ago the first time she was exposed to any kind of queer community.) Lumpkin used to be an attorney who specialized in banking litigation, working 80 hours a week. Her coworkers — mostly straight, mostly male — were intrigued by her love life, and to satisfy their curiosity she started a confessional blog called Single White Femme.

She says her vignettes exclusively feature actual lesbian or bisexual women. Lumpkin won’t work with women with obvious plastic surgery or fake nails. But when I asked her to compare her work to that of the queer genre associated with San Francisco companies like QueerPorn.TV and Crash Pad Series she says “my work has more of an emphasis on aesthetics. I’m sure they hate it when I say that.”

Perhaps another difference lies in the intended audience of each scene. Cade allowed that much of porn’s audience — even the “lesbian” films of Filly and Girlfriends — is men. “Wet dreams!” wishes a note inside Girlfriends Films’ Poor Little Shyla, whose plot line centers around Catholic school girls given hands-on lessons in lesbian sex by their wiser, big-boobed mothers. Though the blessing could hypothetically be geared towards women watching the flick, one suspects it’s not.

But they met up with those who did attend the awards for the after-party. And yes, there was a hot tub involved.