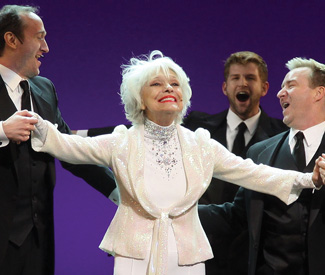 FILM It is close to impossible not to love Carol Channing; those who would protest otherwise are simply heartless. The only adequate response to her is unconditional surrender, as if standing before an oncoming cyclone filled with puppies.

With her saucer eyes topped with false lashes that could give Bette Davis’ a run for her money and a mouth that seems as if it could swallow the world, Channing is a living incarnation of a Muppet (to watch her duet with Miss Piggy just seems natural, somehow). And yet, despite her cartoonish physicality and exaggerated appearance, there is nothing false or put-on about Channing.

When I hear that voice — dripping with whiskey, smoke, and honey, begging to be imitated — the effect is instant happiness. Everything just feels right. As Roland Barthes writes in his essay “The Grain of the Voice,” I then must face the task of articulating “the impossible account of an individual thrill I constantly experience in listening to singing.”

Dori Bernstein’s sweet if worshipful documentary Carol Channing: Larger Than Life necessarily fails at that task, even as it proves the now 91-year-old Broadway legend more than lives up to the second half of the film’s title.

Now slightly stooped, her hair in a choppy gray bob, which she occasionally pulls into a Peggy Moffitt-esque topknot, and her lips a smear of Malibu pink, Channing is still ever the professional, hilariously impersonating a Russian theater troupe one moment and chatting with young dancers in Times Square the next.

The life Channing recounts is an abbreviated and selective version of the one detailed in her 2002 memoir Just Lucky I Guess: her childhood in San Francisco spent being the class clown and worshiping Ethel Waters; her first big Broadway break playing Lorelei Lee in Gentlemen Prefer Blondes; and her career-cementing role as Dolly Levi in Hello, Dolly! And many of the memoir’s same supporting characters, such as frequent TV variety show co-star Loni Anderson and Dolly composer Jerry Herman, also make appearances here.

What Bernstein’s documentary offers is the rare chance to witness the palpable impact Channing has made on others. In personal interactions, she gives her attention equally and wholly to anyone who seeks it (including the camera). Those who have worked with her — particularly the many gay chorus members interviewed here — speak of her as a mother rather than a diva.

The film’s most touching footage is of Channing with her late husband Harry Kullijian, who passed away last year. The two were childhood sweethearts who some 70 years later tied the knot (in Channing’s fourth go at marriage), and seeing them joke together and read aloud poetry passages they shared as love-struck teens is the very definition of adorable.

Curiously, Kullijian’s passing is not mentioned in the film, even as a postscript. You get the sense more generally that Bernstein tried to stay clear of reopening any old wounds with her subject. The awful tempestuousness of Channing’s second marriage to her publicist and manager Charles Lowe is referenced by others but not Channing, who speaks only in passing of the toll life on the road took on her relationship with her son from her first marriage.

Additionally, despite her fame, Channing has always had to share the larger cultural spotlight with Marilyn Monroe and Barbra Streisand, powerhouses in their own right who became associated with the roles she originally made famous on stage (Channing would have her Hollywood comeuppance in 1967 when she was nominated for a Best Supporting Actress Oscar for 1967’s Thoroughly Modern Millie). Larger Than Life attempts to provide a corrective to this, but its motivations for doing so are as transparent as they are understandable. This film is a mash note to Channing as much as it is a gift to her fans, who, rest assured, didn’t need any more reason to love her. *