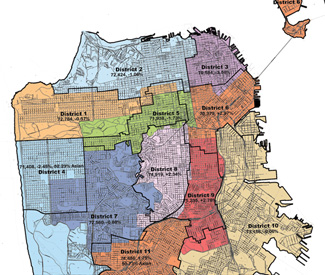 Early in April, a nine-member task force most San Franciscans have never heard of will draw lines that could change local politics for a decade. The Redistricting Task Force is using the 2010 U.S. Census data to adjust supervisorsial districts to reflect changes in the city’s population. Some shifts are dramatic — the area now covered by District 6 has some 25,000 new residents, and will have to shrink. Others will have to grow. And the way the new boundaries are set could affect the representation of ethnic groups, the political leanings of the board members, and the ability of progressives to pass legislation.

The task force has held a series of hearings on individual district lines. The S.F. Board of Realtors and other downtown groups are drawing their own maps. But almost nobody on the left has been looking at the city as a whole and how the different district lines can impact our ability to get six votes.

As campaign consultant David Looman puts it, “what downtown wants is clear — they want to quarantine all the progressives in districts five, six and nine, so they can control the rest.” What do the rest of us want?

The Guardian held a forum on the topic Jan 26, and about 70 people from across the wide rainbow that is the city’s progressive moment attended. The goal: To create a community alternative to what downtown, the Mayor’s Office, and possibly a majority of the task force members is suggesting.

The map above represents a first draft. Fernando Marti, a community architect and housing activist, did the heavy lifting, looking for ways to keep ethnic communities, neighborhoods, and other so-called communities of interest together, while still avoiding the downtown quarantine.

It’s not an easy task, and there was a lot of discussion around some of the lines. Many of the people in the room were unhappy with the border between District 8 and District 6; in the next draft, that will probably be moved back from Valencia to Guerrero.

It’s a work in progress — but we’re publishing it to get some feedback, to let people know that the process is going on, and to let progressive and independent neighborhood activists know that the task force decision, which can’t be appealed or overturned, is critical to the city’s future.