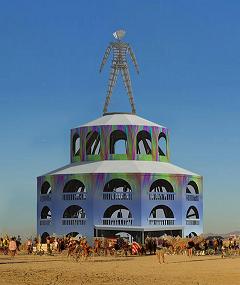 Burners’ worst fears are about to come true: they’ll be denied tickets to Burning Man when the results of the new lottery-based system are announced on Wednesday. But organizers say if everyone stays calm and relies on their community then they’ll probably still get tickets.

Substantially more people registered for tickets than organizers expected, so much so that they believe burners and their allies ordered way more tickets than they’ll need this year because of concerns about the new ticketing system and the fact that the event sold out early for the first time last year.

“It’s big enough that we believe that all the demand for tickets is not new folks,” Larry Harvey – chair of SF-based Black Rock City LLC, which stages the event – told the Guardian. He refused to say how many people registered for tickets, but the LLC did say each registrant ordered 1.7 tickets, indicating a higher than usual number ordering the maximum of two tickets.

If it’s true that most burners bought more than they needed, that also means there will be lots of tickets circulating through the Burning Man community, so Harvey and fellow board member Marian Goodell are urging everyone to not overreact, don’t buy expensive tickets from scalpers, and take advantage of the LLC’s new aftermarket ticket exchange program that will go online in a few weeks.

“If someone is looking for a ticket, we don’t want them to go to eBay or Craigslist, we want them to turn to their community,” Harvey said. “We think the community is a better distributor than anyone.”

Goodell emphasized that the burner ethos calls for people to only sell tickets for face value – which is $240-390 for the 40,000 tickets going out next week – and she said she believes there will be enough tickets to satisfy demand if people don’t panic and feed the scalpers’ market. Those who don’t follow that advice could also end up with counterfeit tickets, whereas the LLC will verify tickets it swaps.

“The secondary market is the community, and we don’t want people to feel they have a commodity in their hand that will help them make the rent,” she told us. “You’re really hurting your community if you’re treating this like a commodity.”

But the unknown factor is how many ticket buyers are more profit-minded than community-minded, particularly after tickets were selling for almost double-face-value on average after tickets sold out last year, according to a study by SeatGeek. Goodell said only burners can keep the scalpers’ market in check.

“We’re being optimistic, but we were able to get more than 50,000 people to remove their trash [from Black Rock City every year],” Goodell said. “We know we can train people to behave in ways that are more community-minded.”

Many people criticized Burning Man for replacing the usual Internet ticket sales with the lottery system this year, but Harvey and Goodell both said they think the over-registration problem had more to do with tickets selling out last year than the new system.

Still, Harvey told us the transition could have been handled better: “If we had it to do over, we might do some things differently.”

As for whether the new system will end up being OK, Goodell said, “We won’t know how it’s working until we get to the event and see if people are happy.” But in short run, she said, “I’m going to have a lot more unhappy people than I was counting on.”

In addition to managing ticket exchanges through its website, BRC does still have one more ticket sales session planned for March 28, when 10,000 tickets will be sold online in a first come, first served system, like first day sales used to be.

As I chronicle in my book, The Tribes of Burning Man: How an Experimental City in the Desert is Shaping the New American Counterculture, Burning Man has grown from a small gathering on Baker Beach in 1986 to a thriving year-round culture that builds a temporary city of more than 50,000 people in Nevada’s Black Rock Desert in late summer. Burners build the city and its art from scratch with their own resources, almost everything in this gift economy is offered for free, and everyone is encouraged to participate in its creation, enjoyment, and cleanup.

The event doubled in size since I started covered it in 2004, and it has spawned a network of regional events around the world, as well as offshoot organizations such as Black Rock Arts Foundation (which funds and facilitates public art off the playa), Burners Without Borders (which does disaster relief and other good works), and the Burning Man Project (a newly created nonprofit that will take over operations of the event in coming years).

The LLC is currently negotiating with the U.S. Bureau of Land Management for permits that will allow the event to grow up to 70,000 people within five years, but Goodell cautioned against those who might see growth as an answer to this year’s problems.

“Honestly, I don’t want more people until we do a little tweaking to the departure process,” Goodell said, noting that people waited as much as nine hours this year to get off the playa and onto the two-lane highway that leads to the Black Rock Desert.

I asked whether they were entertaining any big new ideas for managing the growth of the event, such as how the popular Coachella music festival this year created two events with identical lineups to handle demand. Harvey didn’t say specifically that was an option, but he did refer to his essay discussing this year’s art theme, Fertility 2.0, which just belatedly went online.

“If you read my theme,” he told me, “it’s all about the expansion of the culture.” Among other sentiments, Harvey wrote, “We are living in an age of mass production and consumption that is unsustainable. But culture, as a living system, has the power to create and recreate itself.”