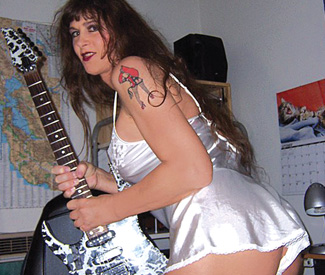 LIT “When you’ve lived so far like I have,” Christine Beatty’s wry voice came crackling through the phone as she drove to Las Vegas to play the slots, “you sometimes just have to catch your eye in the rearview mirror and laugh. I’ve led such a charmed life, really.”

Some doe-eyed Wisconsinite may have snagged the Miss America crown last week, but in terms of representing this nation’s glorious variousness, that tiara should be tucked neatly into Beatty’s glovebox. A transsexual activist, author, and good-time girl, Beatty just published her memoir, Not Your Average American Girl on her newly christened Glamazon Press (available at Modern Times bookstore in the Mission, www.mtbs.com). In it, she tells her story of growing up and discovering her inner self during a very turbulent time in Northern California, through the stoner 1970s to the economically rocky ’80s to our own time, when trans people have gained an unprecedented visibility yet still find themselves the targets of discrimination from both conservative quarters and other LGBTs.

“I started Glamazon Press because I want transwomen to have another outlet for expression that I think is lacking, ” Beatty said. “I feel that the Internet has brought us more visibility, but we’re still tucked under the wing of the gay movement, and maybe it’s time to move out. I don’t want to divorce the ‘T’ from LGBT, it’s been very politically beneficial in many ways. But we need to develop our own voice. There are situations unique to us — the surgery costs money, and we’re completely vulnerable in the work place from a legal viewpoint, if people employ us at all.”

In her memoir, a significant amount of valuable San Francisco history is unearthed. Not Your Average American Girl’s juiciest bits, for me, recall her life as a trans newbie in the Tenderloin in the ’80s, hanging out at the Spirit Club and embracing sex worker life — a period vividly evoked, the city seething with a grimy energy and sense of family, a lost drama of payphones, sex ads, and backrooms. And then she’s a ’90s rocker with her band Glamazon, the book also nailing the electrifying live scene of the time.

The most resonant parts, all recounted with a kind of surprised honesty, deal with Beatty’s deathly drug habit and recovery, her HIV diagnosis 25 years ago, and her journey into transwomanhood, something she approached with such unrelenting drive that her ex-wife and her mother became two of her biggest supporters, despite initial upset.

Even considering Beatty’s storytelling talents, however, it’s a wonder that Not Your Average American Girl exists at all. It meticulously recreates scenes from Beatty’s experiences using entries from the journals that she’s kept all her life. And really, if your mortal coil encompassed typical suburban mama’s boy, stoner hippie, macho soldier, undercover married cross-dresser (or “frilly werewolf”), Tenderloin call girl, recovering heroin addict, pioneering rock musician, and author-publisher, how legible would your diary be?

“When I went to write the book, I looked at these old journals and I was filled with gratitude,” Beatty said. “I was so scared, hopeless, resentful in parts. But I see how far I’ve come and I’m still alive. And I must have known I was going to survive — otherwise why the hell would I write all this down?”