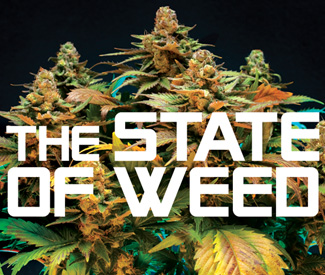 HERBWISE It’s been a weird year to start a marijuana column. Shortly after we started Herbwise, which was intended to be our weekly look at marijuana culture and events, politics reared its ugly head, rendering it necessary to go to hearings at the State Building, call up California Assembly members, and occasionally wade through seas of legalese. Such is the state of cannabis under ongoing federal prohibition, but it’s been a particularly dramatic year.

And in some moments, news and culture reporting melded together in the marijuana world. Take, for example, the case of Oakland’s Harborside Health Center, which is often called the largest dispensary in the world (it is certainly the largest in California). After years of painstakingly crafting a working relationship with city government, the business was heavily audited by the IRS. The federal agency decided Harborside — and 40 other California dispensaries — fell under the jurisdiction of Section 280E of the Internal Revenue Code, which denies the right for businesses involved in illegal drug trafficking to claim standard business expenditures. The collective now owes $2.4 million in back taxes, an amount that founder Steve DeAngelo asserts will bankrupt it if his business is forced to pay up.

Despite the ever-growing acceptance of the plant in the United States — a Gallup poll put the number at 50 percent in the fall of 2011 — medical marijuana is under attack by the federal government. Last fall, US Attorney for Northern California Melinda Haag sent out letters to the landlords of roughly a dozen Bay Area dispensaries threatening them with civil forfeiture, or possibly four decades in prison, if they failed to move this “trafficking” off their property within 45 days. The letters targeted dispensaries considered to be in a school zone.

Most left without a fight. In San Francisco, the Tenderloin’s Divinity Tree Patients Wellness Cooperative, the Market Street Collective on Upper Market, and the Mission District’s Medithrive and Mr. Nice Guy were among the businesses that shut their doors, some completely and some to transition into delivery-only services. [UPDATE: Attorney Matt Kumin tells the Guardian that Divinity Tree and Medithrive have filed a “coordinated federal lawsuit” through his office in protestation of the closures]

Fairfax’s sole dispensary, Marin Alliance for Medical Marijuana, was forced to close after 15 years of legal operation overseen by long-time cannabis activist Lynette Shaw. The 7,500-person Marin County berg’s town council passed a resolution supporting the Alliance, which served as a symbol of popular support for legal cannabis in a county beset with some of the highest breast cancer rates in the country.

Assemblymember Tom Ammiano and Sen. Mark Leno have been the most outspoken California politicians in coming out against the federal government’s meddling with the state’s cannabis. At a press conference at San Francisco’s State Building in October 2011, Ammiano announced his frustration that the feds would “upset the will of the people” by curtailing safe patient access. Proud to be an elected gay official, he promised to continue to crusade for an issue that he says disproportionately affects the LGBTQ community.

One of the steps Ammiano took was to meet with Haag to discuss what could be done to assuage her concerns with the industry. “That was very, very disappointing,” Ammiano commented on this initial talk. In a recent phone interview with the Guardian, he remembered that Haag implied that the order was coming from above, from high up in the Obama Administration.

Ammiano doubts her assertion that she had little discretion in the matter. “She said she was only doing what the boss was telling her to do. We had a hard time with that.”

He does think that the Obama Administration is sending its attorneys mixed messages — case in point, US Attorney General Eric Holder’s repeated comments that federal interference in state-legal marijuana operations would be “a low priority.” Ammiano also makes the connection between the attacks on cannabis and the self-sustaining industries behind the War on Drugs. “The DEA, some of the diehards, this is like a jobs program for them,” he said.

His meeting with California Attorney General Kamala Harris went more smoothly. Ammiano says Harris, who voiced cautious support for the industry last fall, was eager for a more comprehensive regulatory system to be put into place, but she supported Proposition 215 — the 1996 measure that legalized medical marijuana in California — on principle.

Faced with an ambiguous future, medical cannabis’ proponents — politicians, activists, entrepreneurs, and patients — are putting forth plans for just such a system. This year will be the playing field for a passel of campaigns to take medical marijuana out of the under-supervised arena in which it’s found itself.

Three ballot initiative campaigns seek to address the issue. Two — Regulate Marijuana Like Wine and Repeal Prohibition — would legalize cannabis use for adults across the board. Another, which has perhaps the most likely chance to succeed in the $2 million process of getting onto the ballot, is being put forth by patient advocacy group Americans for Safe Access, the United Food and Commercial Workers (the union that represents many cannabis workers in California), and marijuana collectives. It’s called the Medical Marijuana Regulation, Control, and Taxation Act.

“We decided to focus on medical because we figured that taking that further step at this point is unwise given the federal government’s actions over the last months,” said attorney George Mull, who is part of the team that proposed the measure. If passed, the initiative would establish a 21-member state regulatory board comprised of doctors, industry folk, patients, activists, government officials, and others. A state supplemental tax on cannabis would be levied and local governments would be required to allow one dispensary per 50,000 residents. Ammiano said that he and Leno were also working on proposing legislation that would provide regulations.

But the future of medical marijuana in California remains somewhat cloudy. “I’m worried that even if we come up with the regulations, the feds will find something else,” said Ammiano. Complicating the matter, the California Supreme Court moved unanimously on Jan. 18 to review the power that cities and counties have to make their own laws concerning cannabis accessibility — plus, it plans to look at the old disconnect between state and federal law on the matter..

So much for the politics of marijuana in 2012. Away from the headlines, it’s plain to see that the plant is increasingly accepted in popular culture. On a local level, East Bay YouTube stoner Coral Reefer continues to tweet to thousands of followers every time she sparks a bowl, and on the national stage, Miley Cyrus admits to smoking “way too much fucking weed,” after seeing the birthday cake friends had gotten her. (It had Bob Marley’s face on it.)

On television, the United States is learning about Harborside’s travails — but not just from the news shows. Discovery Channel shot a season of reality TV following DeAngelo and his staff, telling the stories of patients and about the reality of running a dispensary for a show they entitled Weed Wars even before the final $20 million IRS ruling. As the collective is being persecuted by the feds, its fan base across the country grows.

Will Discovery Channel renew Weed Wars for a second season? Regardless of the network’s views on the protagonists’ profession, if the cameras are kept rolling they’re sure to capture another year of interesting times for California cannabis.