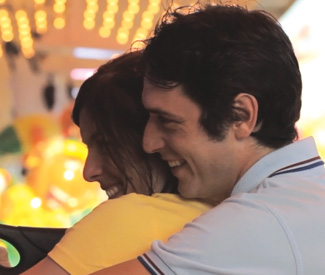 <P>arts@sfbg.com
<P>
<P><B>FILM</B> French actor Val&eacute;rie Donzelli made her first feature as writer-director with 2009’s <I>The Queen of Apples</I>, which trawled the film festival circuit for a couple of years &#151; eventually getting its title tweaked to <I>The Queen of Hearts</I> &#151; before making its unheralded U.S. debut at the 2010 Mill Valley Film Festival. It got a minor theatrical release in France and none at all here.
<P>All this goes to show that, contrary to all optimistic wisdom, not every film will find its audience. Not even when it is, in fact, the kind of movie that tends to win audience awards. <I>Queen</I> was endlessly energetic, quirky, and endearing, in the manner of 1960s independent films whose youthful makers needed to prove they could do every trick and break every rule in the book. It was charming despite being almost too cute for words, and a mite too pleased with itself. The slender story aimed for little more than charm: Donzelli played a hapless young Parisian flinging herself from one comically doomed love to another before winding up with Mr. Right, played (as were all the Mr. Wrongs) by J&eacute;r&eacute;mie Elka&iuml;m, who in 2000 was the unstable gay teen in S&eacute;bastien Lifshitz’s memorable <I>Come Undone</I>. <I>Queen</I> may have been uneven, but it was frequently so funny that hardly mattered.
<P>Obviously somebody noticed, however, since Donzelli is now back with a second feature she co-stars in, and co-wrote with, Elka&iuml;m. (Evidently other people like this team as well &#151; in the interim they got cast opposite one another in &Eacute;lise Gerard’s 2010 <I>Belleville-Tokyo</I>.) It’s even playing at a theater near you, at least for the next five minutes.
<P>Though more ambitious as (largely) a serious drama, <I>Declaration of War</I> reprises the same flaws as its predecessor, being over-stuffed with stylistic digressions, a little too eager to please at times. But once again it’s a very likable piece of work that largely works on its own terms.
<P>While <I>Queen </I>was primarily content to poke fun at the great French tradition of slender twentysomethings moping lovesick about Paris, <I>War </I>declares itself on something inherently humorless: a child’s grave illness. Juliette (Donzelli) meets Romeo (Elka&iuml;m) &#151; yep, that’s a bit much &#151; at a punk club, where his pogoing catches her eye. After a very 1960s montage of love al fresco (although they do not run through any flower fields), out pops the no less auspiciously named Adam, and all is well apart from some higher-than normal new-parent exhaustion issues related to the baby crying just about every waking moment.
<P>Eventually, however, Adam’s tendency to barf, cough, and tilt his head leftward while showing no interest in learning to walk raises suspicions confirmed by Dr. Prat (B&eacute;atrice De Sta&euml;l, who was also a standout as the heroine’s neurotic flatmate in <I>Queen</I>): little Adam has a brain tumor, and there’s a long uncertain road ahead that puts infinite strain on the young couple’s individual emotions, collective resources and future together.
<P>Even in this much more sober story context, Donzetti can’t resist cramming in every stylistic whim that comes to mind, from superimpositions to interior voices and multiple anonymous narrators, not excluding a bursting into song. The cost of her chasing after such spontaneity is that sometimes a gamble falls flat, calling attention to itself without adding anything, like the soundtrack choice of some overly gimmicky electronica when Juliette freaks out during her child’s CAT Scan. Eclecticism isn’t always an ideal tactic, especially when a subject like this one demands a certain groundedness.
<P>But many of her tactics work, finding humor in surprising places and refreshing some familiar devices of domestic tragedy. Donzetti has a very sure touch with actors; she and the ingratiating Elka&iuml;m work so well together that we don’t mind their characters remain in some ways underdeveloped. (In fact this seems somewhat intentional &#151; Juliette and Romeo plunge into serious commitment before they’re fully formed adults, and the script doesn’t spare them the odd outburst that’s childishly unflattering.) Much less melodramatic than its title would suggest, <I>Declaration of War </I>is uneven but full of life and ideas &#151; there’s room for Donzetti to refine her directorial instincts, but one hopes they stay a little messy.
<B>DECLARATION OF WAR </B>opens Fri/27 in Bay Area theaters.