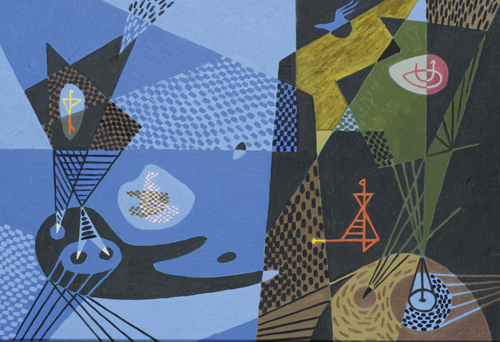 VISUAL ART A museum-quality show in terms of ambition and achievement, “Surrealism: New Worlds” fleshes out a forgotten, if not effaced, chapter in American art history, even as it incidentally tells the story of the gallery showing it.

For the éminence grise of the Weinstein Gallery was Gordon Onslow Ford (1912-2003), who, in addition to his role in the evolution of abstract art, was also one of the great collectors of modernism. Along with his friends Roberto Matta and Esteban Frances, the British-born Onslow Ford joined André Breton’s Surrealist Movement in Paris in 1938, and would subsequently pursue an increasingly visionary, Zen-influenced abstraction in New York City, Mexico, and finally Northern California, where he lived from 1947 until his death. Onslow Ford’s influence helped transform Weinstein — his exclusive dealer — into a serious gallery for historically-connected surrealist art; through him, the gallery would forge links with other, then-living surrealists like Enrico Donati (1909-2008), and even now, after his death, it continues to gather his fellow travelers, as when it began representing the estate of Gerome Kamrowski in 2005, or the estate of Jimmy Ernst (Max’s son) in 2010.

As befits its plural title, “New Worlds” doesn’t present anything like a unified aesthetic, because surrealism alone among the modernisms isn’t an aesthetic but rather a critical assault on the conventions of reality. Thus abstraction mingles freely with figurative art, assemblages with bronzes, an automatic work like Oscar Domínguez’s Three Figures (1947) with a meticulous imitation readymade like Marcel Duchamp’s Eau & Gaz à tous étages (1958). Drawn from a roughly 30-year time span, the 1930s to the ’60s, the show lists some 22 artists — an unlisted Dorothea Tanning (still alive at 101, though more active these days as a writer than a painter) brings that number up to 23 — all of whom were connected to some degree to Breton’s group. The theme, broadly speaking, is the encounter between the European-formulated surrealism and the “new world” of America.

Being a gallery, Weinstein naturally leans most heavily on painters it represents; Onslow Ford, Donati, Kamrowski, and Leonor Fini are the pillars of this show, along with substantial contributions from Matta and Jimmy Ernst. What is remarkable, therefore, is how deftly the gallery has filled out the show with works from big-name artists from the surrealist pantheon. A pair of Max Ernsts — Convolvulus! Convolvulus! (1941) and Head of a Man (1947) — gives as good an impression of his mercurial range as possible from merely two paintings, the former an Henri Rousseau-like jungle of hidden creatures emerging from weird plumes of color, the latter an austere though colorful Neo-Cubist mask. A single André Masson must suffice for that artist’s equally varied output, but the massive Le Centaure Porte-Clé (1947) (or “centaur key-ring”) is a real stunner whose mutating image suggests something of his graphic work. Large canvases by seldom seen surrealists like Domínguez and Kurt Seligmann lend the show considerable depth.

The most crucial of the surrealist old masters represented here, however, is Yves Tanguy, who stakes out his own wall with three oils and one of his delicately rendered gouaches. All are what you would call prime works of the artist, with significant pedigrees: one belonged to the early surrealist poet Paul Éluard, another to Hans Bellmer, and even the gouache has appeared in books and museums. But to identify Tanguy as more “crucial” here than, say, Masson or Max Ernst isn’t to remark on the greater significance and number of the works in question; rather, the influence of Tanguy on painters like Onslow Ford, Donati, Matta, Kamrowski, and William Baziotes feels more pronounced, and brings us to the heart of the show. For while, again, “New Worlds” showcases the surrealism’s variety over a 30-year span, the main thrust of the show inevitably becomes the development of abstract surrealism, particularly as affected by the arrival of Breton, Tanguy, and other members of the surrealist group in NYC in the early ’40s, fleeing the Nazi occupation of Paris.

The encounter between the European surrealists and American artists like Kamrowski and Baziotes is the chapter of art history largely effaced through the application of the term “abstract expressionism” to NY artists of the late ’40s and the ’50s. The term was already in use, coined in 1919 in German and brought into English by the Museum of Modern Art’s first curator, Alfred Barr (see his 1936 book Cubism and Abstract Art), to describe Kandinsky. But the term was anachronistically applied by American art critics like Clement Greenberg as a way to avoid the label “abstract surrealism.” With its communist and anarchist associations, “surrealism” carried too much revolutionary baggage for the post-war political climate in the US. The move also helped elide the stubborn political reality that abstract art was first achieved in Germany by a Russian artist, as if to suggest that historical “expressionism” hadn’t really been “abstract” and only here in America had become so. Thus Greenberg, in his essay “‘American-Type’ Painting” (1955, 1958), elaborates an account of art as a series of laws, problems, and solutions in order to write: “The early Kandinsky may have had a glimpse of this solution, but if he did it was hardly more than a glimpse. Pollock had had more than that.”

Though no one believes in laws of painting anymore, the eclipse of abstract surrealism from American art history has proved curiously durable. But “New Worlds” illustrates the pivotal role of surrealism with a collaborative poured painting by Kamrowski, Baziotes, and Jackson Pollock, uncertainly dated “Winter 1940-1941.” Given that Onslow Ford began pouring paint in 1939, and gave a series of lectures on surrealism in NYC attended by at least two if not all three of the young American artists beginning in January 1941, it’s hard not to conclude that Pollock’s initial inspiration for his drip paintings was Onslow Ford’s account of surrealist automatism. This is the type of connection the label “abstract expressionism” obscures.

Yet this historical neglect has paved the way for Weinstein’s success, as the gallery has become an effective advocate for abstract surrealism.