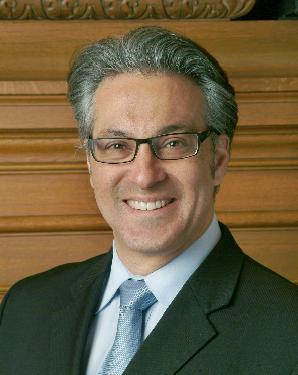 The room was packed for the inauguration of Sheriff Ross Mirkarimi, and for the most part, the crowd wasn’t talking about what Mirkarimi referred to as the “cloud” hanging over the event. He mentioned the investigation into possible domestic violence only that once, then joked that he’d managed to get a lot of press to his event.

Mirkarimi was asked what happened the night in question, and he declined to talk about it, saying the criminal justice system would work its way through the process. Then his wife, Eliana Lopez, interrupted, took the mike, and announced that this was a “family matter” and she would have no more to say – except that she has no complaints about her husband.

That was it. No shouted questions as the sheriff walked away, no 1000-watt camera flashes in his eyes, nothing to indicate that this is the gigantic scandal that it’s become in the daily papers.

But Mirkarimi did make one statement that’s worth mentioning: He said that there were forces in the department (I think he meant the Police Department) that didn’t want to see him as sheriff. That’s absolutely true.

That said: I don’t know what happened that night at Mirkarimi’s house. But I do know that the minute the cops were brought in, it became political.

See, the cops, for the most part, are not Mirkarimi fans. He beat their guy, former Police Officers Association president Chris Cunnie, in the race for sheriff. He’s demanded changes in the department (including foot patrols, which a lot of old-timers don’t like). He also beat a sheriff’s captain. He’s a civilian who is going to run a law-enforcement agency as a civilian, which means he’s not part of the Fraternity.

The news reports about the incident were clearly leaked by the SFPD. So, I’m sure, was the search warrant (that’s a public document, but I honestly don’t think the Examiner tracked it down, I think it was delivered to the paper by a source in the department). Nothing wrong with that – cops (and politicians) tip reporters to stories all the time. I’m not blaming the Chron or the Ex for doing the story – it’s news, you have to report it.

And, of course, if the cops had ignored the case or downplayed it, they would have been criticized for covering up an incident involving the new sheriff.

Again: I’m not excusing Mirkarimi’s behavior (alleged behavior — we don’t know what actually happened). But the way the story and the details were leaked reflects the political reality that the cops don’t love the new sheriff, and a lot of them would be thrilled to take him down. That’s just political reality.

Which means Mirkarimi needs to be very, very careful – there are people watching every single move he makes, every day. And they’re not interested in policy debates.

PS: The D.A. and the cops managed to finish this particular investigation in record time. I wonder what’s happened to the investigation into possible vote fraud in the Ed Lee campaign. Months have passed. Nobody is facing any charges. There are no police leaks about anyone involved. Funny, that.