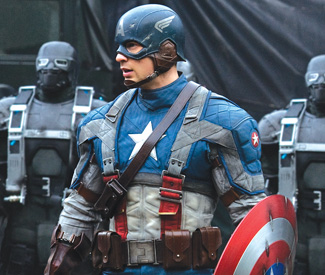 YEAR IN FILM How did the tiger get its stripes? Or, more pertinently, how did the superman get his tights? This has been the thrust of most big-budget superhero movies since the genre’s big boom a decade ago — a strict adherence to monomythic convention, with modern action movie trappings to make the material accessible to newcomers.

But these titans from Marvel and DC’s pages weren’t born yesterday. Indeed, many are inextricable from the historical contexts that birthed them. Recent adaptations often seek contemporary relevance or fresh spins on old characters. Sure, some of these superfolks need an upgrade, but when new interpretations have the integrity to treat the source comics as stories worth telling on their own terms, the results can far surpass convoluted attempts to “improve” upon the originals.

The heroes finally returned to their roots in 2011, with two major productions taking up specific historical periods. Matthew Vaughn’s sleek if slightly smarmy X-Men: First Class flashes back to the merry mutants’ rise during the swingin’ sixties, while Joe Johnston forges a thrilling wartime adventure in Captain America: The First Avenger. But not all period superhero movies are created equal.

First Class is, for all its potential, a mishmash of sub-Mad Men costuming and mortifyingly ham-fisted social messages. Inspired casting doesn’t salvage the film from its central flaw: it’s a standard-issue superhero blockbuster masquerading as something savvier. It plays fast and loose with genre but never to its advantage, and mishandles the source material’s anti-prejudice themes. It also warps real history, revising the Cuban Missile Crisis in order to force a historical context. But its mawkish civil rights rhetoric and Cold War paranoia can’t conceal the fact that the film feels essentially contemporary.

Captain America, conversely, hits all the right beats. Others have noted that Johnston previously helmed 1991’s The Rocketeer, so it’s no surprise he knows how to put on a good pulpy show. But the movie blends Nazi occult weirdness with a grounded, convincing patriotism that reinforces the World War II setting. It has its problems as a historical film — for one thing, it never directly treats the Holocaust. But it doesn’t feel like the same origin story we’ve repeatedly seen; instead it feels like a superhero movie successfully taking on a different genre. It’s just this sort of adventurousness we can hope for as the studios continue to mine the funnybooks for ideas — comics have a rich history, so why not explore it instead of update it?