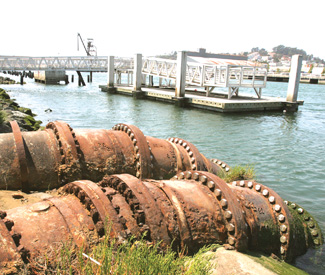 In February 2004, San Francisco saw an usually strong winter storm. More than an inch and a half of rain fell within 30 minutes, too much to handle for the wastewater system, which in parts of the city is more than 100 years old. In the Mission and Bayview, some homes were flooded with rainwater and raw sewage.

Before adjourning for the year, the Board of Supervisors on Dec. 13 approved payments settling a lawsuit filed in January 2005 by some of the residents affected by the storm. The main plaintiffs in the case were Jane Martin and David Baker, whose home in the Mission district were flooded.

The settlement totaled $624,930 in compensation for property damage, including $50,000 for Martin and Baker, and many of the other plaintiffs getting around $25,000 each.

Representatives of the SFPUC are trying to change that. There are currently several projects in the works to address issues with the city’s sewers, including flooding. These include Model Block improvement programs, such as green streetscaping meant to soak up rainfall, and a Sewer System Improvement Program that is in its early stages.

According to SFPUC spokesperson Jean Walsh, the SSIP is meant to tackle a number of issues with the sewer system, including flooding. She listed “seismic reliability issues” and a projected increase in major storms due to climate change as pressing reasons for the plan.

Besides the ancient pipes, the city’s network of storage transport boxes is routinely overloaded. These boxes are underground containers that catch water and hold it until it can be processed through the system and through to water treatment plants. Walsh says that they “surround the city like a moat… When those boxes fill up and all our capacity is full, the system overflows.”

This can cause flooding, especially in low-lying areas of the city and natural creek beds. Precita Creek, which once flowed freely along what is now Cesar Chavez Street, has been a site of overflows and flooding since it was first incorporated into the city’s sewer system in 1878. Nearby Islais Creek has also been diverted into sewers in the flooding-prone area.

The SSIP will have a particular focus on green technology. “One way that we’re going to address the flooding issue is by using low-impact design,” Walsh said. “We’re looking at permeable paving, bio-retention swales, and rainwater harvesting as ways to reuse the rainwater.”

Walsh says that the Model Block program has been a pilot for the SSIP. In May, the city and the Environmental Protective Agency unveiled a new green “streetscape,” part of the Model Block program, on the 1700 block of Newcomb Avenue. Areas of the sidewalk were replaced with permeable pavement, trees and gardens, meant to improve beauty and calm traffic as well as soak up rainwater so that it does not flow directly into the sewer system. In 2010, a similar project was completed on Leland Avenue between Bayshore Boulevard and Cora Street.

Neighborhoods in San Francisco’s southeast, particularly the Mission and Bayview, have been disproportionately affected by problems with the sewer system. Olin Webb, a lifelong Bayview resident and member of the group Bayview Hunters Point Community Advocates, says that sewer improvements are long overdue.

“Whenever it storms, there’s an overflow here,” Webb said. “Every time it rains, you can smell the raw sewage.”

Bayview community organizations have been campaigning for improvement to the sewer system for decades. Webb said some progress has been made in the past few years, including the installation of a pathway at Yosemite Slough Park, part of an effort to restore the wetlands in the area and turn it into a pleasant community space.

Webb was ambivalent about recent improvements. Bayview Hunters Point, like most of San Francisco, has lost much of its African American population during a recent surge in out-migration. According to a 2010 census, San Francisco’s black population has declined by 22.6 percent in the last decade.

“This took too long,” Webb said of the sewer improvement. “I’ve been here 60-something years, my mother worked on this before me. It’s like a joke to me that now everything’s getting fixed up and most of the people can’t enjoy it.”

Residents may still have a to wait for SSIP projects to begin construction. The program will likely span 15-20 years, and is currently in its early stages. “The project is still in design and planning stages,” Walsh said. “It needs to be validated and budgeted. We know it’s going to cost multiple billions of dollars”

Yet Walsh is optimistic that the project will make real change in a sewer system that’s been inadequate for decades. “It’s going to be an impactful project,” she said. “People are going to notice it happening.”