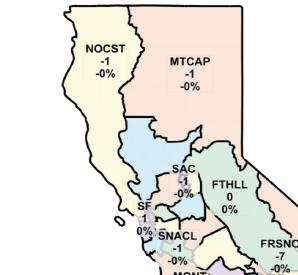 I opposed the measure that created California’s new Redistricting Commission. As we noted in our endorsements at the time:

The commission is hardly a fair body — it has the same number of Republicans as Democrats in a state where there are far more Democrats than Republicans. And most states still draw lines the old-fashioned way, so Prop. 20 could give the GOP an advantage in a Democratic state. States like Texas and Florida, notorious for pro-Republican gerrymandering, aren’t planning to change how they do their districts.

But Prop. 20 passed anyway, and control of the critically important task of drawing lines for state Legislature and Congressional districts fell to an unbalanced group of people with no political experience. They commission held hearings up and down the state, took reams of testimony — and wound up with a map that will probably add six or seven Democratic seats to the Congressional delegation.

That’s not a big surprise: Democratic Party registration is stable in a very blue state, and Republican registration is declining. Any fair redistricting would likely lead to more Democratic seats. And it’s clear that the likes of Phil Burton were not involved: In Los Angeles, two powerful veteran members of the House, Brad Sherman and Howard Berman, wound up in the same district. No matter what happens, the Democratic Party will lose one of its heaviest hitters.

But ProPublica, the national (and generally very solid) investigative reporting group, took on the process and concluded that the Democratic Party managed to wire the deal:

As part of a national look at redistricting, ProPublica reconstructed the Democrats’ stealth success in California, drawing on internal memos, emails, interviews with participants and map analysis. What emerges is a portrait of skilled political professionals armed with modern mapping software and detailed voter information who managed to replicate the results of the smoked-filled rooms of old.

(Memo to the folks at PP: There haven’t been “smoked filled rooms” in this state in quite a while. By the time the 1990 census was done, most of the state (including most public facilities) had strict limits on indoor smoking, and in 2000, nobody smoked in any rooms controlled by any governmental agency. But we get the point.)

The story has set off a furor. Robert Cruikshank, one of my favorite political bloggers, did a fairly brutal takedown on the report:

Of course, the core assumption that California Republicans deserved any new seats is challenged by their collapse in the November 2010 elections. While Republicans across the country were having a banner night, California Republicans lost every single statewide election (including losing the governor’s race by 13 points despite outspending the Democrats nearly 10 to 1). They also failed to pick up a single seat in either the legislature or Congress, losing one Assembly seat. California voters made explicitly clear in November 2010 that they do not like Republicans. That doesn’t appear to have actually influenced the commission’s deliberations, but it does mean the claim that Republicans had any reasonable expectation of gains is ridiculous.

Then Jerry Roberts and Phil Trounstine, two poltical reporters with at least 50 years of experience between them, did their own examination at CalBuzz, and asked PP’s Jeff Larson to explain himself. The result is scathing:

Plainly put, their piece is the worst kind of ersatz “investigative” reporting: lots of heavy breathing and over-reaching conclusions drawn from selectively using, twisting or ignoring facts, relying on innuendo and suggestion, and mischaracterizing crucial elements of the story to inferentially allege an impropriety where none exists. Wink, wink, nudge, nudge, say no more. Moreover, ProPublica never even called the commission for a comment on its much-ballyhooed “findings.”

In failing the smell test, this clunker promises plenty, but simply doesn’t deliver the goods.

But the Roberts/Trounstine takedown holds up pretty well. The point they make is that everyone — the GOP, the Dems, city and state officials, groups like the Mexican American Legal Defense and Education Fund and more — tried to influence the process. In Northern California, the Dems were apparently a little better at it (and managed to create at least one fake front group to promote the interests of Rep. Jerry McNerney); in the southland, the big Democratic operation of Howard Berman and his brother, Michael, which, as CalBuzz points out, have played a key role in past redistricing efforts (those “smoke-filled rooms”), got totally fucked and Howard may lose his seat after 28 years.

I will say that PP dug up some new info and exposed how the Dems managed to create “communities of interest,” some of them bogus, to try to influence the final lines. But I’ve been watching this stuff for a long time, and I can tell you: Reapportionment is political. Always has been, always will be. There are better lines and worse lines, there are scandalous cases of gerrymandering and political payback and there are (relatively) honest attempts to create districts that are fairly compact and also comply with federal law and don’t dilute minority representation. But there’s no such thing as “clean” reapportionment — and if the Dems and Republicans weren’t trying their best to influence the outcome, they’d be guilty of partisan misconduct.

The plain fact is that while Democratic registration has been essentially flat in recent years, Republican registration has fallen into the toilet, and the GOP now represents less than one-third of state voters.

This means that Democrats represent an increasing proportion of the electorate; add to that the fact that decline-to-state independents, the fastest growing bloc of registered voters, also tend to vote Democratic, as we’ve shown previously.

This makes Johnson’s claim that Republicans are entitled to at least their current number of seats, which is the money quote of the Pierce-Larson opus, not only laughable but also intellectually dishonest. Sort of like the whole piece.