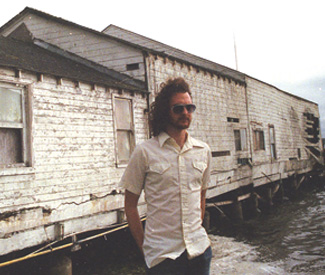 MUSIC Michael Beach is not the conventional — or, cliché — singer-songwriter. Granted, he writes stripped down folk rock, but he’s not locked in the style. He can swallow the comparisons to Nick Drake or Mason Jennings, but he hasn’t modeled himself after those (or any other) singer-songwriters really. “I think that I would get bored if that’s all I listened to,” he says. It explains why there’s more to his bare bones sound — the dude simply doesn’t fit the mold.

“It’s not like I sit at home and read Greek mythology,” Beach tells me over the phone. Yet, in answer to a question about his newest record, Mountains + Valleys, released on Spectacular Commodity/Twin Lake Records, he evokes narratives and characters from biblical text and classical myths.

“You take something,” he explains, “a character from a myth, a religious tradition, or a historical figure and that symbolizes an idea. And then you manipulate those ideas by explaining it through the characters.”

“So you make it your own in other words,” I counter.

“I mean I’m certainly not under the impression that nothing like this has ever been done before.”

Beach is quick to pass on credit to others, whether it’s his predecessors or the musicians who’ve lent him a hand in the studio. It makes you think he’s still vaguely uncomfortable as a solo artist. First and foremost, Beach is the guitarist and lead singer of Electric Jellyfish, a rock band based out of Melbourne, Australia. Beach, who’s from Merced, attended La Trobe University in the suburbs of Melbourne and formed the band with Peter Warden and Adam Camilleri roughly seven years back.

It was when Electric Jellyfish took a short break that Beach started recording on his own. “I didn’t want to be idle, so I recorded an album.” It was as simple as that — Blood Courses was released in 2008. However, two years later, Beach’s visa expired. He was forced back to the states and made his home in San Francisco.

Now the members of Jellyfish take turns touring their respective countries. They have a forthcoming seven-inch entitled Trouble Coming Down, and are on the bill to play Austin, Texas’ SXSW in March. In the meantime, Beach is left to his own devices.

Mountains + Valleys shares similarities with Beach’s previous album, but with some notable differences. “[Blood Courses] was really, really sparse and brittle; purposefully one guitar track and one vocal track. I wanted to stretch my legs a little bit and incorporate some other instruments for a whole band sound. But I still wanted to keep things sparse and basic.”

Mountains + Valleys is sparse. However, as the title indicates, it ascends in dramatic directions too. Beach may hold back at times, but he can yank those chains off and embrace a devil-may-care attitude. It’s painstaking calculation as much as pure impulse. If Beach is fairly abstruse with his words, he’s clearly vulnerable in his vocal delivery. If “So Said the Birds” has elements you might ascribe to folk, “Straight Spines” gushes with enough drive to call straight indie-rock.

Interspersed throughout the album are brief instrumentals that vary from the electric rock collage of “Central San Joaquin” to the more subtle and dissonant “Shasta.” Beach says the inspiration for the instrumentals was Chris Smith’s Bad Orchestra, which wasn’t widely released outside of Australia.

“I think [the instrumentals] made me less one-dimensional, less like ‘I’m a guy who writes songs and strums my guitar.’ There’s more than one way of conveying meaning in music.”

With Brian Smith, and the Same