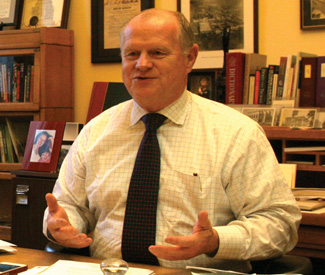 Michael Hennessey has served as San Francisco’s sheriff for half of his life, the longest such career in California history — and by all accounts the most progressive. Since taking office in 1980, Hennessey has been an island of liberal enlightenment in a political climate and law enforcement culture where tough-talking conservatism has been ascendant.

Yet in that era, Hennessey pioneered the creation of innovative programs to compassionately deal with drug abuse, violence, recidivism, and lack of education among jail inmates. He proactively brought unprecedented numbers of minorities, women, LGBT employees, and ex-convicts onto his staff. And he sometimes resisted carrying out evictions or honoring federal immigration hold orders, bold and risky social-justice stands.

His stances drew scorn from the local law enforcement community, which never endorsed him in contested elections, and criticism from political moderates and national media outlets. But San Francisco voters reelected him again and again, until he finally decided to retire as his current term ends next month.

He credits his success and longevity to the people of San Francisco, who have also bucked the harsh national attitude toward criminals and the poor. “San Francisco is still largely a liberal voting town,” he told us in his well-worn office at City Hall, “and not many liberals run for sheriff.”

That logic held up in this year’s election when progressive Sup. Ross Mirkarimi — Hennessey’s hand-picked successor — was elected to the post. Mirkarimi, who led a tribute to Hennessey at the Dec. 13 Board of Supervisors meeting, said he’s honored to be able to continue the legacy of someone he called “the most innovative sheriff in the United States.”

Hennessey was a 32-year-old Prisoner Legal Services attorney for the Sheriff’s Department in 1979 as he watched then-Sheriff Eugene Brown letting go of reform-minded staffers and ending his predecessor Dick Hongisto’s early experiment with a school in the jail. So Hennessey quit his job and focused on running for the office.

“I said to myself that I’m not sure if I’ll be a good sheriff or not, but I know I’m better than anyone else running,” he told us, later adding, “I certainly never expected to be sheriff for 32 years.”

Rank-and-file deputies — with whom Hennessey has periodically clashed throughout his career — always preferred one of their own in the job. “As seen in this election, they would like to see someone coming from their ranks,” said Hennessey, even though he notes that at this point, he has hired all but three of the department’s nearly 1,000 employees.

But Hennessey’s outsider status allowed him to deal with the inmate population in a way that the average San Franciscan appreciated, even if the average cop didn’t. “When you’re in law enforcement, all you see are criminals, victims, and people in law enforcement. But I would talk to all kinds of people in the community,” Hennessey said, noting that his experience as a jailhouse attorney gave him a holistic view of his job. “I worked in the jail and I got to know prisoners as people.”

They were people who had certain needs and problems, such as substance abuse, a common problem among criminals. And they were people who would be returning to society at some point, as Hennessey constantly reminded those who expected prisoners to be treated harshly or simply warehoused.

So he broke down the wall between the jail and the community, bringing the city’s social service providers and educators to work programs in the jails, and developing anti-recidivism and vocational programs that allowed ex-offenders to re-engage with the local community.

“Take the bold step of inviting the public in, not all the public, but those who can provide services and help address people’s problems,” Hennessey said. “Then we took the same concept and applied it to violent offenders, which is a little riskier.”

But it was a risk that has paid off as recidivism rates among jail inmates has dropped, and it’s been without any serious cases of inmates harming outsiders. Hennessey is particularly proud of the high school he created in the jail, which will graduate its next class on Jan. 3.

He said the school can truly transform those who end up behind bars. “It gives them a leg up and it’s like a booster shot,” Hennessey said. “They’re at the lowest point in their lives when the come to jail, and then they’re given an opportunity to accomplish something they haven’t been able to on the outside.”

One of many controversial moves during Hennessey’s storied career was his decision to allow female inmates to leave the jails and perform in theaters around San Francisco with the Medea Project, which was created by Rhodessa Jones and the Culture Odyssey art collective to turn the stories of female inmates into plays.

“Rhodessa is a very persuasive person who talked me into letting these women out of jail to perform,” Hennessey said, smiling at the memory. “It was very controversial.”

Hennessey’s mentor in the Sheriff’s Department — the man who hired him, ran his first campaign, and then became his longtime chief-of-staff — was the late Ray Towbis, a tough activist whose social justice stands on behalf of tenants, prisoners, and other marginalized members of society would sometimes put Hennessey into difficult positions.

“Ray caused me aggravation many times,” said Hennessey, who nonetheless kept a life-sized cutout photo of Towbis in his office long after he was gone, a reminder to fight for the values he believed in.

There was the time when Towbis angrily flipped over a table and cursed at a panel of parole commissioners after failing to win the release of a model inmate, triggering a demand from the presiding judge that Hennessey fire Towbis, which the sheriff ignored.

Later, Towbis adopted a compassionate approach to the evictions that sheriff’s deputies are forced to perform, allowing deputies to spare tenants who were disabled or elderly and personally calling journalists to help publicize cases in which the parties bringing the eviction action might back off. That sensitivity stays with Hennessey today.

“That’s one of the tough spots I’m in is doing these foreclosure evictions,” Hennessey said, clearly troubled by his duty but also aware that it is one that he is required to perform, despite pressure from progressive groups urging him to refuse to carry them out.

As a lawyer, Hennessey said he must respect court orders and avoid being held in contempt of court, as Hongisto was in the mid-1970s for refusing to carry out evictions against tenants in the International Hotel.

Hennessey and his staff have always been willing to help tenants resist eviction. His office has an eviction assistance program, and Towbis would sometimes tip off the media to publicize certain unjust evictions. One time, Hennessey said Towbis even called hotel magnate Leona Helmsley and talked her out of allowing her company to evict an elderly ParkMerced resident. Instead, Helmsley allowed the woman to live rent-free for the rest of her life, an unlikely gesture of kindness from the “queen of mean” that Towbis helped publicize.

Hennessey draws the line at outright refusal to carry out a judge’s eviction order. “The sheriff shouldn’t be a law-breaker,” he says. Yet Hennessey’s lawyerly approach to complex issues also resulted in his recent policy of not honoring federal detention holds on undocumented immigrants in the jail, after discovering that the holds are administrative — different than arrest warrants — so defying them isn’t a crime.

The policy Hennessey created last year was to ignore ICE requests for prisoners who aren’t charged with felonies or domestic violence charges, noting that the latter charges are often brought but eventually dropped against people who are the victims of domestic violence.

Hennessey tapped federal and foundation grant money to fund his new treatment and educational programs, hiring an ex-convict to write his grant proposals, something that particularly irked many of his deputies.

But Hennessey believed that ex-offenders had something to offer the department so he didn’t back down in hiring them, going so far as to elevate Michael Marcum, who had gone to prison for killing his own abusive father, to the top position of undersheriff in 1993.

Police groups were outraged, but Hennessey said he had known Marcum for many years and valued his counsel and perspective on the criminal justice system. “It wasn’t hard because I knew him and I know of his integrity and loyalty,” Hennessey said.

Hennessy also irked conservative cop culture for aggressive efforts to make the department more diverse. “We wanted more minorities, we wanted more women, and we wanted gay people,” said Hennessey, who initiated outreach efforts to each of those communities.

In 1984, when he approved of an outreach event in Chaps, a gay leather bar in the Castro — complete with flyers around the Castro publicizing the event — it generated a furor that made headlines not just locally in the San Francisco Chronicle, but the National Enquirer tabloid as well.

Yet Hennessey was able to ride out each of the controversies, many of which happened to fall years away from his next reelection campaign. “Those are good times to make dramatic changes,” Hennessey said.

And because he also saw to some neglected basics in the Sheriff’s Department — such as improving training and the jails’ physical structures to prevent escapes and instituting policies to reduce violence between inmates and guards — Hennessey endured and became a beloved sheriff.

“I’ve always felt somewhat isolated in these beliefs,” said Hennessey, who said that the biggest failure of his career was not proselytizing those beliefs to a statewide and national audience more aggressively. Instead, he has focused on San Francisco, quietly turning the city into a national model for a different kind of policing.

Despite his progressive record, Hennessey has won plaudits and respect from across the political spectrum. In the last election, even the cops who sought to replace him and to undermine his endorsement of Mirkarimi — Chris Cunnie, Paul Miyamoto, and David Wong — all praised Hennessey and promised to continue his programs.

During the Dec. 13 board meeting, Sup. Mark Farrell — consistently one of the most conservative votes on the board — said he has known Hennessey almost his entire life (the sheriff and Farrell’s dad were law school classmates). “I cannot think of anyone with more integrity, a more trustworthy and honest person, than I’ve ever know in my life,” Farrell said.

Sup. David Campos said the immigrant community owes Hennessey a tremendous debt of gratitude. “You have been a tremendous champion for civil rights,” Campos said. “For that, history will judge you very kindly.”

It is a history that Mirkarimi pledges to continue. “Who’s going to fill his shoes? It’s impossible,” Mirkarimi said at the board meeting. “But we certainly have an incredible standard to try to live up to.”

As for Hennessey, he has a fairly clear idea of what he plans to do now that his long and unlikely run as one of the city’s top cops is over: “I’m going to goof around.” *