Home End war, bring that money home -- a controversial proposition, even in... 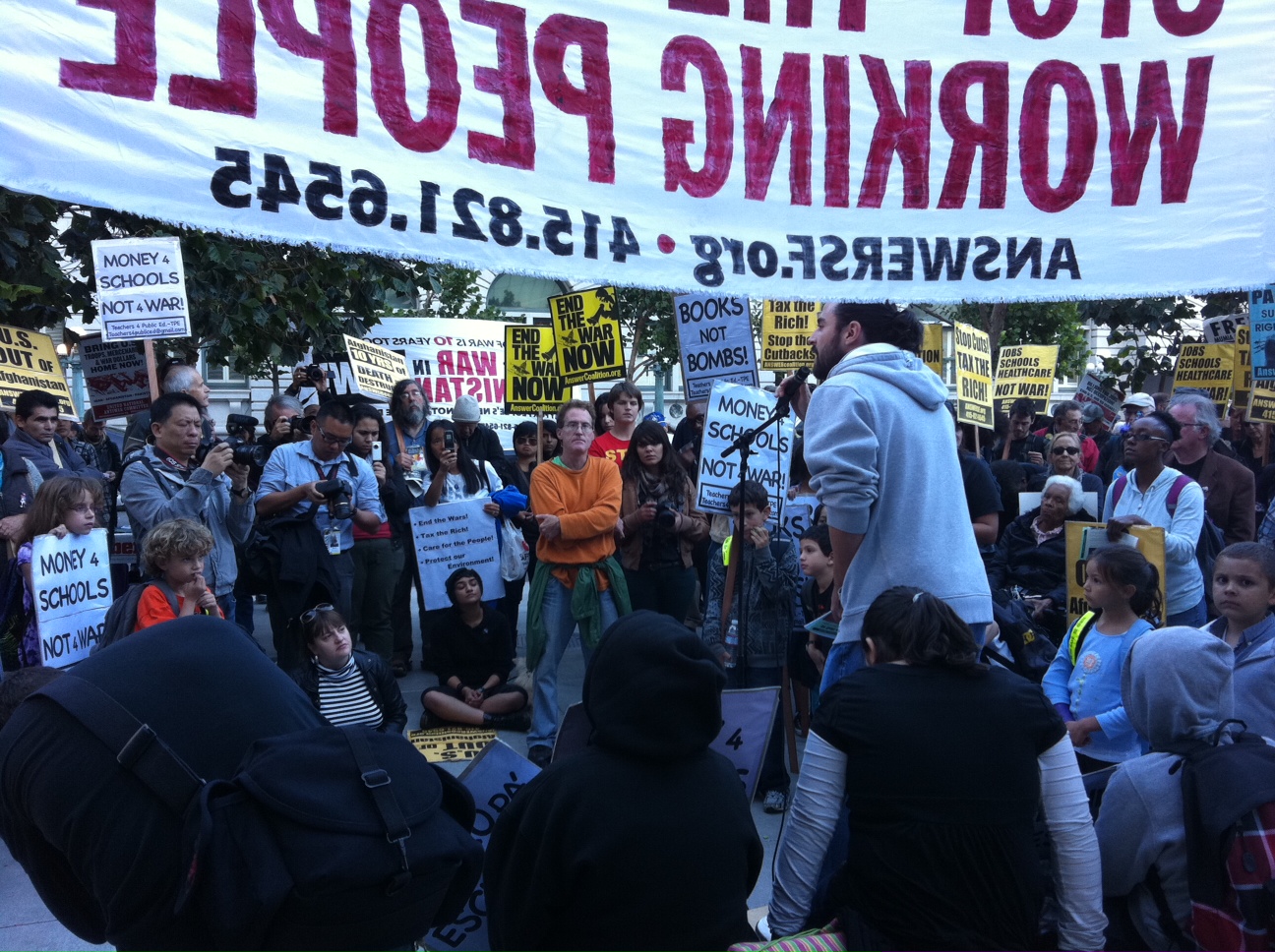 A substantial majority of Americans support ending the war in Afghanistan, decreasing the military budget, and redirecting that money to domestic needs, a position held even more strongly in liberal San Francisco. Yet three members of the Board of Supervisors this week still opposed a resolution in support of that position, a resolution that was mocked on the cover of today’s San Francisco Examiner.

So-called political “moderates” here love to deride progressives and label them out-of-touch with the rest of the country or with what they consider the “real world.” But how sensible and fiscally responsible is it to continue spending more than half of the federal budget on the military, a dollar amount that has more than doubled since Bill Clinton left the White House, when domestic conditions are so bad that tens of thousands of people across the country have been willing to spend months occupying their town squares?

The resolution approved Tuesday on a 8-3 vote – with Sups. Sean Elsbernd, Mark Farrell, and Carmen Chu, consistently the board’s most conservative members, in dissent – was similar to resolutions approved in dozens of jurisdictions across the country, most recently in Los Angeles and Pittsburgh, Penn. In May, a similar resolution was also approved by the U.S. Conference of Mayors, the first such action since the Vietnam War.

The resolution calls for members of Congress to “reduce the military budget, end the wars in Iraq and Afghanistan, and redirect the savings to domestic needs.” In support of that position, it notes that we’re spending almost $1 trillion per year on the military and war debt, more than 50,000 U.S. troops have been killed or injured in the two conflicts, and that everything from schools to public services to the country’s infrastructure needs are severely underfunded.

“It’s a way to signal to the federal government – in this case, particularly [Reps.] Nancy Pelosi and Jackie Speier – that people are fed up with their local economies being plundered to support war,” Janet Weil, who works on resolution like this as part of Code Pink’s Bring Our War Dollars Home campaign, told us. San Francisco’s resolution was developed by the New Priorities Campaign, a nationwide coalition that includes Code Pink.

But during this week’s approval of the measure – which included no discussion and lasted less than a minute – Elsbernd rolled his eyes as the measure came up and then voted against it. Afterward, I asked him why, and he gave a two-pronged answer. He generally opposes local resolutions on international issues, and on this one, he said that pulling all troops out of Afghanistan is an unrealistic position that is out of the national mainstream.

“Is this the appropriate forum to discuss how many troops we should have in Afghanistan? Probably not,” he said.

Yet most people clearly see the connection between lack of resources at home and trying to fight two simultaneous wars and maintain a military presence in 63 countries, something that Weil said has fed the Occupy movement around the country, where signs and public statements have repeatedly made that connection.

“I visited OccupySF and I saw very eloquent anti-war messages on dozens of signs, and that had nothing to do with organizing by Code Pink or other anti-war groups,” Weil said. “For a lot of people, it’s such a no-brainer that people don’t even bring it up.”

Yet she said that many politicians and mainstream media outlets have been out-of-touch with that reality. For example, while there has been some popular outcry over this week’s approval of a provision in the latest defense authorization bill that allows for indefinite military detentions of suspected terrorists captured on U.S. soil, the fact that the bill principally authorizes a whooping $662 billion in new military expenditures has gotten less attention.

“But the Occupy movement has pulsed energy and people into the anti-war movement across the country,” Weil said, predicting that the connection between domestic needs and wasteful military spending will put increasing pressure on the federal government to address the issue.

As for whether local resolutions will help with that process, even moderate political consultant Jim Ross – who mocked this week’s anti-war resolution in the Examiner article – correctly noted that San Francisco helped lead the international effort to boycott South Africa and end its apartheid regime, a movement that began with a resolution approved by the San Francisco Board of Supervisors.

Or, to put it in the bumper sticker mentality that conservatives seem to appreciate: think globally, act locally.