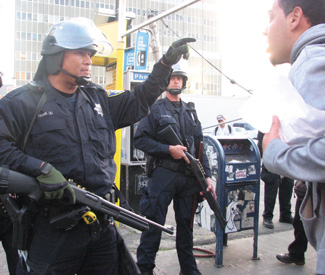 Bay Area cities have been at the forefront of local challenges to the police state, making stands on issues including racial profiling, deportations of undocumented immigrants, the use of force against peaceful protests, and police intelligence-gathering and surveillance of law-abiding citizens. But the city of Berkeley is creating comprehensive policies to address all of these issues in a proposed Peace and Justice Ordinance that is now being developed.

The effort comes against the backdrop of clashes between police and Occupy movement protesters, including the violent Oct. 25 police raid on OccupyOakland, with Berkeley Police and other jurisdictions on the scene.

Among other things, Berkeley is redefining when it will join other communities in what’s called “mutual aid” agreements — deals that require nearby agencies to help each other out when one public-safety department is overwhelmed.

It’s not terribly controversial when it applies to firefighting — but some people in San Francisco and Berkeley weren’t happy to see their officers joining the Oakland cops in the crackdown in peaceful protesters.

Berkeley officials also want to limit the ability of local cops to work with the FBI and federal immigration agents.

The effort began quietly last summer with behind-the-scene organizing spearheaded by the Washington D.C.-based Bill of Rights Defense Committee, which reached out to a wide variety of groups, include the NAACP, the ACLU, Asian Law Caucus, National Lawyers Guild, the Coalition for a Safe Berkeley, and the city’s Peace and Justice Commission.

“It was a series of one-on-one conversations with the leaders of these groups and then getting them into a room together,” said Bill of Rights Defense Committee Executive Director Shahid Buttar.

That effort got a major push forward last month when Councilmembers Jesse Arreguin and Kriss Worthington led an effort to suspend mutual aid agreements the Berkeley Police Department has with the University of California police and two other police agencies — as well as two city policy documents — over concerns about the use of force against peaceful protesters and domestic surveillance activities.

The council approved the proposal unanimously. Ironically, on the day after the vote, the university launched a violent and controversial crackdown on the OccupyCal encampment — without the help of Berkeley Police.

“It sends the message that we’re not going to try to suppress people’s rights to demonstrate and express themselves,” Arreguin told the Guardian.

The timing of the violent police raid on OccupyOakland — which made international headlines — helped elevate the issue. “What happened in Oakland made people very concerned,” Arreguin said.

Peace and Justice Commission member George Lippman agreed: “People were so shocked by what happened in Oakland that they didn’t resist. …To me, it comes down to what are our values.”

Arreguin used public records laws to obtain the mutual aid agreements between the various cities and then, with help from activists, identified provisions that conflict with Berkeley laws and values. Worthington said that work was crucial to winning over other members of the council: “If it was a generic objection to the whole thing, we would not have won the vote.”

The agreements that the council suspended were with the UC police, the Northern California Regional Intelligence Center (an arm of the Joint Terrorism Task Force, a domestic surveillance pact that has ramped up activities since 9/11), the Urban Area Security Initiative (a creation of the Department of Homeland Security), the city’s Criminal Intelligence Policy, and its Jail Policy (which directs local officers to honor federal immigration holds).

“There is a real potential for problems when we give police the blank check to respond to mutual aid agreements,” he said. “We’re trying to ensure they respect this community’s values.”

Arreguin and other members of his coalition have been working on modifying provisions of these documents, and they are expected to return to the council for a vote next month. But that’s just the first step in Berkeley’s efforts to create comprehensive peace and justice policies, covering civil liberties, crowd control policies, use of force, and cooperation with other policing agencies.

“The ordinance we’re discussing would cover a lot of these areas,” Arreguin said. “What we’re trying to achieve here is more accountability.”

For example, the police are the ones who decide what is an “emergency situation” that would trigger a mutual aid response. But should a peaceful protest that blocks traffic or goes on an unpermitted march be considered an emergency? “It may not be appropriate for us to respond to every request, particularly when it comes to political activities,” Arreguin said. “Just because people are breaking laws, that shouldn’t be a pretext to respond to mutual aid.”

In a similar vein, the coalition is developing policies to support Berkeley’s status as a sanctuary city for immigrants of all kinds and looking for ways to resist the federal Secure Communities program, a national database of fingerprints and arrest information that allows Immigration and Customs Enforcement agents to place detention holds on those suspected of being undocumented immigrants.

The boards of supervisors in San Francisco, Santa Clara, and other jurisdictions have tried unsuccessfully to opt out of the program, something that requires state approval. But the activists say Santa Clara has become a model by following up with an ordinance that says the county won’t honor the federal requests until they have a signed written agreement to cover all the county’s costs associated with honoring the holds.

“We don’t do ICE’s job,” Sup. George Shirakawa told supporters after the Oct. 17 vote, according to published reports. Arreguin called the effort “a smart approach and we want to see if we can do it in Berkeley.”

Other Bay Area cities have also begun to examine issues related to a police state that has expanded since the 9/11 attacks, including Richmond and Piedmont. In San Francisco, the latest process of challenging the role of local police officers in domestic surveillance — issues the city has periodically wrestled with for decades — began earlier this year (“Spies in blue,” April 26). It led to an ordinance that would limit that activity, which activists say Sup. Jane Kim will introduce next month.

“If our local police are going to work with the FBI at all, they have to observe our local laws,” says John Crew, the police practices expert with the ACLU-Northern California who has been helping develop San Francisco’s ordinance. “Far to often, the FBI has shown interest in protest activities that have nothing to do with illegal activities.”

For example, documents unearthed by a lawsuit filed by the ACLU and the Bay Guardian and through other avenues show FBI coordination with local police agencies related to the Occupy protests, those aimed at BART, and in the aftermath of the trail of Johannes Merserle, the former BART officer who shot Oscar Grant. The UC Board of Regents also canceled a meeting last month where a large protest was organized, citing unspecified intelligence about threats to public safety.

Crew noted that a right to privacy is written into California’s constitution, yet San Francisco has two experienced police inspectors assigned full-time to work with FBI and its Joint Terrorism Task Force. “They aren’t focused on laws being broken, but on collecting massive amounts of information,” Crew said.

SURVEILLANCE IN THE SPOTLIGHT

Veena Dubal of the Asian Law Caucus, which has also been involved with Berkeley coalition, is happy to finally be connecting various issues related to an overreaching police state. “What’s really exciting about the ordinance is it’s pushing back on all these very problematic federal polices that have really gone after communities of color,” she said. “The people being spied on in Berkeley are not the people who live in the hills, it’s the students and people of color.”

She said the Occupy movement, its broad appeal to the 99 percent, and police overreaction to peaceful protests have helped to highlight some of these longstanding policing issues and caused more people to feel affected by this struggle.

“The Occupy movement certainly brings these issues to an audience that wasn’t concerned about it before. Surveillance and police brutality, all the sudden that’s in the spotlight.” she said, noting that people have begun to question their willingness to give police more power after 9/11. “More and more people are understanding that the powers the government took aren’t just being directed at terrorists, but members of their families.”

“It gets people discussing issues that overlap and creating that kind of dialogue is important,” he told us. “Separation only creates a division in addressing the issue that we’re facing…..We have to start looking at our commonalities and our hopes, instead of fear, because fear is what divides us.”

Phillips said the Occupy movement, with its engaged young people who have stood strong against aggressive police tactics, has helped place the spotlight back on policing issues after progress on combating racial profiling in the ’90s was derailed by 9/11.

“It’s shows that everyone can be marginalized,” Phillips said of the Occupy movement. “Ninety-nine percent of people have been marginalized and that context helps us understand each other.”

Arreguin hopes that Berkeley’s work in this realm sparks discussions with other Bay Area jurisdictions. “We want to work on a regional level to deal with these issues,” he said, later adding, “I’ve been alarmed as the police state has developed over the years.”

Asked whether he’s gotten any pushback from police to his efforts, Arreguin said Police Chief Michael Meehan and his department have been very cooperative and that “our police are just waiting for a dialogue about what kind of changes we want to see.”

A Berkeley Police spokesperson says the department won’t comment on political matters. Berkeley Police Association President Tim Kaplan said mutual aid agreements are important to public safety, but that “we do feel like we’re part of the Berkeley community and we want to work with the city and its citizens….We’re going to do what the law says.”

And the coalition is intent on writing some of the country’s most progressive laws for policing the police.

“The victory we had on mutual aid agreements is very exciting and we have an opportunity to make some real changes,” Arreguin said.

Buttar said his organization has helped to facilitate similar coalitions in about 30 cities, from Los Angeles to Hartford, Conn. But he said Berkeley’s is the biggest and has the most ambitious agenda. “I tend to think that just getting the coalition together is a win,” Buttar said. “So, to that extent, Berkeley is already a model.”