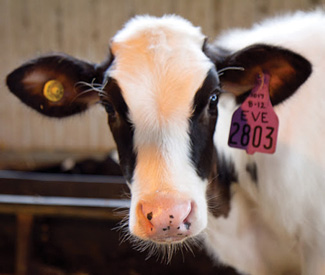 APPETITE On a recent misty morning in Point Reyes, and then during a Petaluma afternoon inland, I visited two of our most beloved creameries. The damp earth of a dairy farm in dark, early hours is oddly intoxicating, while sampling fresh cheese in various stages of ripening is sheer pleasure. These dairies make me proud of the familial, forward-thinking, humane food practices that have been going strong in the Bay Area for decades.

One look in the eyes of cows at Straus Family Creamery (www.strausfamilycreamery.com) and you’re changed. If you did not care where your milk came from, you do now. Petting baby cows, tagged with names such as Wilma or Eve, you become attached, even protective, of these peaceable animals.

Organic before it became a “trend,” Bill Straus began farming this coastal Point Reyes land in 1941 with 23 cows (there are now over 300 milk cows). His wife Ellen read Rachel Carson’s game-changing Silent Spring in the 1960s, mobilizing them both toward a lifelong commitment to environmental sustainability. Theirs were the first certified organic dairy farm west of the Mississippi in 1994, leading in sustainable farming practices.

Early on a soft, gray weekday, I trekked up to the farm, right on Tomales Bay, via scenic winding roads. The air smells funky with cows, yes, but also bracingly of earth, water, grass.

Bill and Ellen’s son Albert Straus now runs the farm. Majoring in dairy science, he launched the famed ice cream line (he’s a real aficionado), continuing to grow Straus Creamery in sustainable practices like composting solids and waste to fertilize their land (or that of nearby biodynamic wineries).

Straus keeps a “closed herd” so no infection or disease gets transported to the cows. While he works with 300 milking cows, he’s simultaneously raising 250 young cows who begin milking after two years.

As prices of basics like grain and production have gone up at least 25 percent in the last couple of years, there’s not a lot of profit to made allowing the natural process vs. increasing milk flow by injecting cows with hormones. It is heartening to see those like Straus, who care more about the quality and health of the product for consumers, along with the animals and their land, than the bottom line. Still, Straus presses on, under standards for organic farm certification that are stricter than for any food product.

“Most farmers are pretty risk averse, but I seem to continue to go the other way, “Albert told me with a laugh.

He’s pleased to note that around 50 percent of Marin and Sonoma farms are now organic. (Learn more about the organization formed in part by Albert and Sue Conley of Cowgirl Creamery, Marin Organic, www.marinorganic.org, now celebrating 10 years and responsible for promoting much of the region and industry’s growth).

A day spent with Cowgirl Creamery (www.cowgirlcreamery.com) founders Sue Conley and Peggy Smith, among the finest cheesemakers in the country, is a delight. There are close ties to the Straus family: Conley and Smith not only source milk from Straus, but Sue was in part inspired to launch Cowgirl by the Strauses.

Both from rich culinary backgrounds, Peg and Sue created highly-lauded cheeses like that triple-cream dream, Mt. Tam, and earthy, unique Red Hawk. Their shop in the Ferry Building is a cheese destination.

The Cowgirls produce 10 different cheeses, seven in Petaluma (a town boasting other major creameries like Clover Stornetta and Three Twins), and three in their original, smaller Point Reyes facility. Peg notes that in Europe keeping cheeses regionally uniform — like Camembert in Camembert, France, for example — means strict style regulations. “We are lucky to have such great variety of cheeses here,” she told me, celebrating the freedom of experimentation led to some of the most popular Cowgirl cheeses.

Besides an idyllic lunch at Sue’s house, the day’s high point came in sampling Mt. Tam in numerous states of age, from an hours’ old, just-brined specimen that tasted salty-sour-tart to a meaty, acidic example at seven days, and finishing with a creamy, nutty 32-day chunk. (Mt. Tam is usually sold in the mid 20-30 day range.)

Schedule a tour of Cowgirl (tours resume in the Spring) or the Straus farm (group tours only), and you may come away as I did, with an increased appreciation for cheese, cows, our diverse region, and the artisans who strive to create the best… and change the world while they’re at it. *