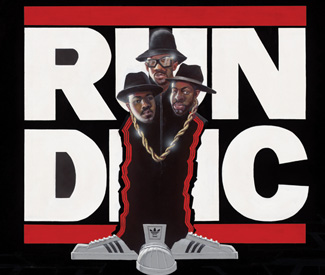 LIT The Occupy movement, though it’s been criticized by many for the lack of racial diversity among protesters, has certainly attracted its share of black rappers. Here in the Bay, Boots Riley has been a vocal supporter, participating in Oakland’s November 2 general strike. On the other side of the country Occupy Wall Street has met Kanye West, not to mention music mogul Russell Simmons (okay, he’s not a rapper) making space in his predatory debit card-selling schedule to stage rants over the influence of lobbyists on the federal government. And how could forget the furor that erupted over Jay-Z’s line of OWS-inspired Rocawear T-shirts?

The admirable efforts of Boots notwithstanding, there was a time when all of hip-hop was going to save the world, not just sell its most vital revolutions for $22 a shirt. The time is ripe, it seems, for some books to pay homage to that fact. And although they vary in the specifics, there are a few that are doing just that.

THE PLOT AGAINST HIP HOP

Hip hop academic par excellence Nelson George is occupying the bottom half of a computer screen for a Skype-conducted interview with the Guardian.

George’s latest novel (his third, though he’s better known for his non-fiction, including the seminal Death of Rhythm and Blues) follows the adventures of D. Hunter, a security guard from the projects of Brownsville, Brooklyn. Hunter is embroiled in the murder of Dwanye Robinson, a hip hop academic who bears more than a passing resemblance to George himself. To solve the crime, Hunter must plunge into the untoward world of the hip-hoperati — the movers and shakers and producers and makers that may or may not be out to annihilate the culture’s populist powers.

George isn’t an adherent of all the conspiracy theories in the book. But he is concerned about a “chill factor” that has artists considering the views of corporate sponsors before penning lyrics that speak truth to power.

“This stuff they’re making,” he says, speaking of today’s radio stars in his characteristically familiar tone (he is, after years of writing about them and producing VH1’s Hip Hop Honors awards show, on a first name basis with many of the big guns). “They’re not even hoping for art. They’re just hoping to sell sugar water, T-shirts — whatever Jay(-Z)’s selling this week. I don’t think people were feeling that way about L.L., Eazy E.

“There was a whole period when every success, every commercial was a cause for celebration,” he says. “Now, the whole game has to change.”

And in Occupy, he sees an opportunity. Emcees have made their way down to Zuccotti Park — and not just Simmons and Jigga. Talib Kweli, Lupe Fiasco, and David Banner (of “Whisper Song” fame) have performed and listened at their local Occupy encampment. “I think this will goose people to deal with a lot of things that are going on,” says George.

Reading the rife-with-history Plot Against Hip-Hop can’t hurt one’s knowledge of the institutional forces behind what we hear on the radio. Says George before signing off: “Every book I write is a tool of education.”

THE LEGENDS OF HIP HOP

Of course, not every one believes in the institutional approach to social change. Hip-hop artist and author Justin Bua follows the personal habit gospel. “Veganism, that would really change the world,” he says. “Everyone should have a garden if they can. When people lead, the leaders follow.”

This individualized vision of change makes sense in relation to Bua’s art. He is a portraitist, famous for “The DJ,” a print of which went viral in the college-dorm-room-poster sense of the word. Though he started out by painting jazz scenes, he created “The DJ” after convincing his distributor that there was a chance that hip-hop images would sell just as well. He was right — that initial foray turned out to be one of the top selling posters of all time.

His most recent project is a love ode to similarly meteoric rises: to the B-boys, graffiti artists, emcees, and producers that made it to the top of the pack. In Legends of Hip-Hop, Bua pairs his trademark expressive faces and limbs with kind-of journal entries that sum up what they to him, or to the world of hip-hop at large. Veganism doesn’t make an appearance — but that’s not to say the book is without social significance for him.

“These people are part of our history,” Bua says during his Guardian interview at vegan Mexican restaurant Gracias Madre. “It’s really in the tradition of the Grecos, the Raphaels, the Rubins.”

And where the old masters painted kings and queens, Bua paints Biggie and Queen Latifah. To Bronx-bred Bua, they are royalty and more than that, the meter sticks of our time. Hip-hop’s effects can even be seen in the Oval Office (President Obama’s is the face that concludes Legends of Hip-Hop).

Bua thinks this power can be harnessed. “If you look at all the money generated by hip-hop — that could change the world.” And by no means does he think that the animal-product-free lifestyle and that of beats and breaks are unrelated.

“I think being vegan is the ultimate expression of hip-hop,” he says before rattling off a list of dairy-free icons. (KRS-ONE, Russell Simmons, Dead Prez, DJ Qbert, and famous breakdancer Mr. Wiggles the are all vegans.) “It’s irreverent, subversive, truth — it’s about having a clear head and mind. The ultimate form of respect is to not eat each other. That’s fucking weird.”

SOME DAY, IT’LL ALL MAKE SENSE

Common’s autobiography (which he penned with the help of ghostwriter Adam Bradley) debuted in the 20th spot of the New York Times’ hit parade. The book itself is heartrendingly earnest — you’ll find none of the sly jabs of Bua or George hidden among its pages. But in a way, it is the more personal ode to the curative powers of hip-hop than either of those authors’ tomes.

Putting aside the namedropping of ex-lovers (Erykah Badu) and current brothers (Kanye West), Some Day exposes a shocking truth. Common, he himself insists, is no more godly than the rest of us — he just chose the music as the rope that would pull him to that level. Sure, he wrote the woman-worshipping “The Light,” but don’t you still hear him using the word ‘bitch’?

Common has perhaps the most call of the three authors to strike out against Tea Party tomfoolery and mechanized mediocrity in American government. (Lest we forget, when Obama invited him to perform at the White House, the Fox News Palin-Hannity-O’Reilly cabal screeched he was a “vile rapper” in part due to his song for Assata Shakur — something he speaks frankly about.) He also seems to have realized something that many haven’t: hip-hop can be, in fact has proven itself to be, a tool towards whatever ends an artist has in mind.

The player shapes the game. Which is something, I fear, that will take a long time to start making sense to some.