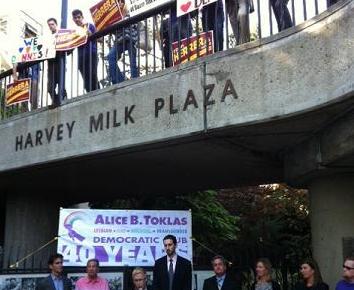 UPDATE: This article has been changed to include three corrections.

Community activists in the Castro District of San Francisco have been riled up by recent legislation proposed to limit public use of the Harvey Milk and Jane Warner plazas.

The ordinance proposes to ban “wheeled equipment” and prevent people from sleeping, camping, or selling merchandise. Further, the ordinance limits the time that seating will be available to 9 a.m. to 9 p.m.

“Poor people and low income people can’t live in the neighborhood anymore,” said community activist and Housing Rights Committee member Tommi Avicolli Mecca. “This ordinance is a response to people’s discomfort with people who look homeless in the plaza.”

Mecca believes that this legislation was pushed forward by the Castro/Upper Market Community Benefit District and the Merchants of Upper Market and Castro (MUMC) as a way to privatize the public spaces and, in effect, prevent homeless people from occupying them.

“(The legislation) talks about sleeping and camping. Who is doing that other than homeless people and what printed materials are being distributed other than the Street Sheets?” said Bob Offer-Westort human rights organizer for the Coalition for Homelessness. “All of this really clearly targets homeless people.”

Other community activists, such as blogger Mike Petrelis, believe that this legislation is a preemptive act against the Occupy movement and that meetings discussing the ordinance intentionally excluded activists like himself. “This new legislation is part of a downtown agenda to prevent an Occupy encampment set up,” said Petrelis.

Petrelis wrote about the legislation on his blog, and among his arguments he states that preventing tents to be present in Harvey Milk and Jane Warner plazas expresses direct disapproval of the movement.

“I read this and hear fear on the part of [Sup. Scott] Wiener, MUMC and the CBD that an Occupy the Castro encampment could take root at the top of Market Street,” he said.

Wiener, who is sponsoring the legislation, says that it was drafted under the Pavement to Parks effort to transform the space into park land and that the provisions are standard for that use.

“We’re trying to have usable vibrant public space and this legislation will help us have it,” Wiener told us. “This legislation provides what we already have in our parks. It’s pretty basic provisions.”

Wiener says that many local merchants and advocates, such as the Sisters of Perpetual Indulgence, have been involved in discussions around of this legislation, but the Sisters have not taken a stand on the measure.

“The Sisters, as far as I know, have not made a collective effort one way or another on the legislation at this time,” said Sister Barbi Mitzvah in an email. “The Sisters individually can comment, but coming from the organization takes a majority vote as we are a 501c3 non profit.”

Whether this legislation addresses homelessness, an attempt to prevent an Occupy Castro movement, or if it is to create a “usable vibrant public space,” the community is demanding participation in this decision.

“Both plazas play a vital role in the Castro community,” Petrelis said. “So why won’t he hold a public meeting?”