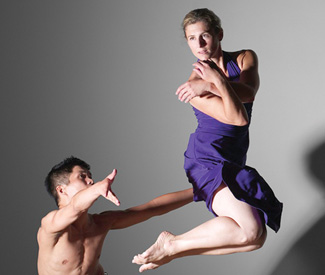 DANCE Have you ever climbed a steep mountain but were unsure that your lungs or legs would hold up to get you to the top? Or felt a relationship slip through your fingers before you were barely aware of what happened? How about feeling your feet firmly planted, only to land suddenly on your behind? The performers in Stacey Printz’s new Hover Space, her most ambitious project yet, are finding out that their dance floor is putting the lie to such basic concepts as grounding, balance, gravity, or momentum. The space moves up and down and tilts at precarious angles, and yet the dancers appear to have the times of their lives.

At a late rehearsal in Z Space at Theater Artaud for the upcoming Hover Space, they giggle and struggle, accommodate and resist the demands of this unstable environment. The 75-minute work may be physically challenging, but thematically Printz believes that it rests on a solid, if volatile, base.

“How do long-term relationships sustain themselves?” the dancer, choreographer, wife, and mother asked herself. “What does it look like in a place of contentment when you have peace and support, though you have learned to listen and compromise?” For Printz it means being feeling grounded, and therefore being secure enough to take larger risks, “do crazier things” and expand into more new worlds. For some people that solidity comes through relationships, she says; others find it in themselves though “this space cannot be static because the moment you lose the ebb and flow, it’s dead.”

It’s good reasoning from a dancer-choreographer who has always refused to be pinned down. Still an awesomely strong performer, Printz draws on jazz, modern, some ethnic forms, and hip-hop, disciplines in which she has both trained and performed. If the term “fusion” didn’t suggest borrowing, perhaps even an essential lack of artistic independence, she wouldn’t mind the description. “But this is who I am,” she says. “This is how I push myself the most.”

Having a foot in several worlds has given Printz access to a creative freedom that informs the choreography for her own company but which is most strongly seen in her own dancing. For instance, last October’s WestWave Dance Festival piece If You Knew — a duet with beatboxer-musician Tommy Shepherd — was a fulminating explosion of rhythm and motion, with the two of them challenging each other to an ever-higher degree of virtuosity. But she has also challenged her own (and other) dancers to step beyond their own comfort levels. In the 2009 spitfire Cross Talk, the members of the National Folk Theatre of Ireland loosened up their torsos while Printz’s barefoot dancers shone in pristinely precise footwork.

In addition to choreographing for her own 11-year old company, Printz regularly collaborates with Marc Bamuthi Joseph on his multi-genre theater pieces. “I have known him for a long time, and I know how his body moves, so I can give him what he needs within a specific context,” she explains. But working with Bamuthi gives Printz what few choreographers working on someone else’s show get: time and respect. “He is brilliant and has the resources and a big umbrella under which we all can work together for months,” she says.

She also learned that “if you bring in collaborators, let them do what they do best.” Bamuthi lets her make her own gifts to his projects.

Printz’s primary collaborators for Hover Space are her 12 dancers, the largest group she has ever worked with locally. The choreography of a dozen or so distinct episodes includes looks at the relationships of three very different couples. While she often uses pre-recorded music, for her first evening-length piece Printz has invited DJ-composer Kraddy (a.k.a. Matthew Kratz) to join the team. Designer Sean Riley suspended the 12×15 movable platform from Z Space’s ceiling. David Szlaza created the lights; Catherine Myre signed on for the costumes.