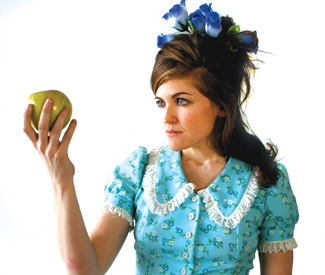 THEATER A savage and seductive performer with a potent skill set, Erin Markey has been busy these last several years conquering New York’s downtown performance scene. But she’s no stranger to San Francisco. The rising 30-year-old performance artist, actor, and playwright credits visits to the Bay Area with some formative experiences, including her introduction to pole dancing — subject of her acclaimed one-woman play, Puppy Love: A Stripper’s Tail — and the invention of her drag persona, Hardy Dardy, the Michigan patriarch of her new multimedia, multi-character musical solo show, The Dardy Family Home Movies by Stephen Sondheim by Erin Markey. So it’s fitting as well as plain badass that the new piece receives its world premiere here, this week, under the auspices of the San Francisco Film Society’s KinoTek program.

Why SFFS? Markey was last out in San Francisco in 2009, on a bill with Beth Lisick and Tara Jepsen, when Film Society programmer Sean Uyehara saw her and was floored. “I thought, ‘This woman is going to be famous,'” remembers Uyehara, who describes Markey’s ferocious ability to woo and alarm and audience at almost the same moment. He stayed in touch. Later, Markey’s proposed Dardy Family piece, which avails itself of several screens for live camera feeds and pre-recorded video projections, made it a candidate for KinoTek, Uyehara’s bailiwick — though he admits it’s the most theater-like piece SFFS has taken onboard since initiating the cross-platform programming stream in the mid-aughts.

“We’re presenting a play, essentially,” says Uyehara, adding, “It’s based around this idea of home movies and how these home movies interact with a ‘normal’ Midwestern family. So I could see the potential for a hybrid program developed out of that.”

Markey, reared in the South and Midwest, studied theater and gender studies at the University of Michigan, where renowned NEA Four performance artist and faculty member Holly Hughes became a critical influence. Today she enjoys a growing reputation as an intensely charismatic shape-shifter in the queer performance and cabaret scenes, and a sharp and daring actor at large (her turn in an intimate, site-specific production of Green Eyes, a violent and erotic Tennessee Williams one-act, won her raves at last January’s Under the Radar Festival, in a production now headed to Boston.) I spoke with Markey by phone from New York about the background to The Dardy Family Home Movies.

San Francisco Bay Guardian You’ve said you became a stripper to save money to move to New York, but were inspired by the pole dancers you’d first seen in SF. It almost sounds like a post-graduate program for you in performance. Was it a big adjustment?

Erin Markey It was a big adjustment. The dynamics between the girls that work there are really complicated. I knew I was leaving, so I had a different relationship to it than most. But it was hugely influential. It’s such an isolated, specific, weird context, with arbitrary sets of rules that you can only figure out by doing it wrong. It was almost the perfect thing to do for somebody who was studying queer studies and theater practice as well. It was constantly surprising me, and defying everything that I was reading about, in terms of feminism. Because there are camps — people being pro-porn or anti-porn, for example.

But it’s just so complicated. There’s almost nothing else to do but make creative work around it, just to reflect and acknowledge how complicated it is. I think it does that work much more service than being just “for” or “against.” The experience really changed my relationship to storytelling. Performing there feels really similar to performing for any crowd. But in that context you never know what exploitation means, if you’re being exploited or if you’re exploiting them because you’re affecting this interest. It feels similar to acting and doing cabaret and stuff like that. So I tried to tease out what felt the most sincere, even if it was really absurdist and ridiculous — that feels most sincere sometimes. Those just go in and out: being really absurd and being hard and real.

EM Actually, maybe 10 years ago, I don’t remember when, but in San Francisco I went to a drag king competition. There was a workshop, and I took it. We were all making drag king characters. I used to sing a little song in my head all the time, like a gibberish song: “hardee, dardee, hardee, har …” So I just decided to name my guy Hardy Dardy. He ended up being my go-to drag persona. He’s actually been in almost every show I’ve ever made on some level, even if he wasn’t named as Hardy Dardy. He was in Puppy Love, and he was in a show that I made about being my sister’s maid of honor.

He had his own show called The Curse, which was talk-show style. During that show, I ended up having to flesh out more of his life. His wife was first introduced in Puppy Love, actually. He mentions briefly that he went to the strip club when he got upset one day. So Molly became his wife, and I became very interested in her. She’s definitely not my mom, but she could be very good friends with her. I started making the Dardy Family Home Movies based on Molly’s experience mostly — her dealing with her kids leaving home, and having to re-understand her entire identity. I watched my mom go through that. All she wanted to do was be a good stay-at-home mom. It’s not like other professions where the older you get supposedly the higher up you get in the ranks, and the more you become what you wanted to be in the first place. You prepare these children to leave and be good people, and then they leave.

EM I thought about that a lot when I thought about the women at the strip club — how they depreciate in value over time, because youth is a really important part of making money in that context. It seems like this dark cloud hanging over these women’s heads. As an actor, I know what the value of being young is in this industry. It hangs over our heads as well. This show [includes] the conversation between Molly and her daughter, Kelly — who’s “a lot like me,” heh, heh — and who’s ultimately talking about being a performer. These things I’m talking about aren’t crazy explicit [in the show] necessarily. It’s a family of characters that I’ve been developing over years. But in the subtext of everything, this stuff is definitely there.