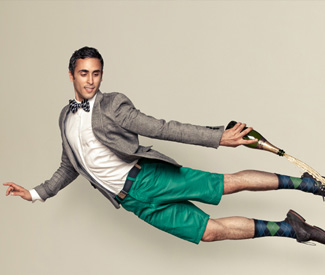 DANCE We go to dance performances to be entranced, or at least intrigued, by well-physicalized movement ideas. But it helps if choreographers work with collaborators who not only enhance basic concepts but also bring their own perspectives to the dance-making process. Two programs last weekend, Liss Fain Dance’s playfully evocative The False and True Are One and LEVYdance’s delicious ROMP, showed just how successful the result of that kind of cooperation can be. Interestingly, Liss Fain and Benjamin Levy also contributed to the recent trend of abandoning the proscenium theater — too expensive? Too hierarchical? Too restrictive? — in favor of “installations” in which audiences move around the performance space.

Choreographers seem to feel that nudging audiences out of their seats will engage them more actively because they can choose when they want to focus on something. Personally, I am not convinced that this process involves a viewer more intently. However, the format’s informality, its sense of being invited in, suggests a welcoming atmosphere that can make dance watching, at least for a time, a lot of fun.

Perhaps the greatest gain that the installation format offers is the closeness it offers between audience and dancers. To observe muscles stretching less than a foot away, to hear the breathing that accompanies a strenuous lift, and to see a tiny adjustment to balance and gravity that a dancer makes is a gift that a traditional theater cannot provide. What you loose in overall perspective is compensated for by the intimacy between observer and performer.

For that to happen, choreographers need designers who can create the appropriate environment. False and True‘s Matthew Antaky and ROMP‘s Jack Beuttler chose the square as a basic format. Both modulated the idea to support the choreography to excellent effect.

Antaky’s transparent fiberglass panels made for muted perspectives on the four squares within the bigger square that the dancers inhabited. The design looked a little like a board game and was airy enough to allow for a number of pathways for the dancers. Into the absolute center he placed a slightly raised podium — suggesting a private writing and thinking space — for narrator Nancy Shelby, whose reading of Lydia Davis’ musings set False and True‘s tone. Fain’s controlled yet free-flowing choreography for nine dancers — the uneven number was most refreshing given Antaky’s strict geometry — constantly shifted between all the available spaces and groupings. Dancers picked up and modified sequences in a game of unstated rules, but they also became part of the audience, watching their colleagues or listening intently to Shelby.

Beuttler’s square for the rambunctious ROMP at first suggested a town plaza in which people, i.e. the audience, had pulled chairs around into an informal café setting. In the latter part of the work, tables around the periphery reseated the audience banquet-style; they both framed a central performing area and then became the platform for a moving menu of passing delicacies as dancers slithered, cavorted, and leapt in close-up. The audience ate it up, laughing, talking, and taking pictures. I wouldn’t have been surprised if they had tried tip the artists.

Levy’s fast-paced and exuberant choreography for himself, Mélodie Casta, and Scott Marlowe pulled in a group of nine auxiliary dancers — some of them still students — who raced and dove between the seated audience without a single misstep. Their energy was that of kids released at the end of the school year, but their discipline and exactitude was that of professionals. An intricately structured trio for Levy’s own dancers highlighted their eccentric individuality but gradually deepened into cheek-to-cheek slow dancing.

As for that audience participation that both choreographers wanted, Levy’s public lustily participated. But a funny thing happened during False and True. Despite the exhortation to move around, the audience mostly stood and sat. Seeing those dancers be so vigorous and intent and yet so quiet — Dan Wool’s score was a modicum of discreteness — cast a spell that you didn’t want to break.