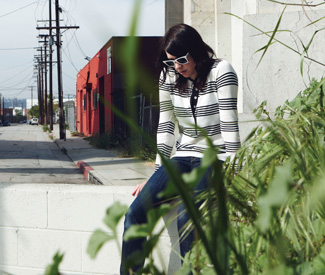 MUSIC The contrast was almost too much to bear. There she stood atop a pile of glittering, emoticoned video shares: Kreayshawn, repping for white girls in Oakland ’til the cows come home. Her N-word spouting sidekick and dookie gold everything, the perfectly-packaged “Gucci Gucci” video and swag-pumping ovaries. Everywhere, just everywhere.

You’d think she was the only one doing the hip-hop thing in the East Bay, or maybe you’d think that’s just how East Bay honky female emcees get down — but only if you didn’t know about k.flay (which can totally be remedied, by the way. She’s playing Wed/23 at the Independent).

You probably wouldn’t dress up like Kristine “k.flay” Flaherty for Halloween. She doesn’t wear curlers out or mess with bifurcated hair coloring, but she has been diligently laying down soul-baring flows on catchy beats in the Bay Area for years. It was k.flay’s voice you heard drifting through the hook of Zion I’s “Coastin.'” She spits verses about Diet Coke addiction, waking up in your ex-boyfriend’s bed when you didn’t mean to. You want to be her — and she’s not going to make you regret saying that.

Because not to belabor the Kreayshawn comparison, but k.flay will never inspire blog posts about racial appropriation. A Stanford grad (but still funky) she stepped into the hip-hop scene like she didn’t even need a costume to kick it — almost like she was of a generation that grew up with the music. One need only check the video for “Party,” a song off her 2011 mixtape I Stopped Caring in ’96 for an example of k.flay’s style. Witty, driving, contagious, her flows employ the use of newborns, hot guys, and the “old school cast of Felicity” to evoke house party-good times. Throughout, k.flay is flinging her arms around, the girl too cool to care that she looks like a goober.

Still, in a phone interview with the Guardian on a recent trip back to San Francisco (she was crashing in New York to record the album, “like one of those extended stay hotels,” she says) k.flay copped to the fact that she’s still considered a novelty in the industry — and that there’s a good reason for that.

“There’s never been someone who has had a long career and been really prolific and successful for a long time who was a white female rapper. There’s been a lot of blips here and there of people who have popped up and made some noise and doing some cool stuff, but I think no one’s really had a ton of staying power yet.”

She’d like to change that. Though the emcee has been known to roll around between genres (her new five-song album Eyes Shut features the co-producing chops of the Prodigy’s Liam Howlett and embraces electronic music), she’s got too much going on in her head to leave hip-hop.

“Maybe it’s a bad tendency, but I have this tendency to fill space with a lot of crap. It’s kind of good for me,” she laughs.

The question begged to be asked — how did the Summer of Kreayshawn strike k.flay? Turns out, k.flay’s “Gucci Gucci” remix wasn’t the two women’s first run-in. They had hooked up in 2010 to talk about Kreayshawn directing a k.flay video. ” I remember her saying to me ‘yeah my sister raps and it’s fucking horrible,'” k.flay says, adopting a slightly more nasal tone. “And showed me a video of it. I didn’t know she was doing anything at the time. And then one day I got a million emails about it and I was like, what is this and I realized it was her. Yeah, it was pretty random.”

What came after — Kreayshawn’s 500,000 Twitter followers, that weird beef with Rick Ross, life wrought large on a ghettoblaster-Sanrio-glitter tip — k.flay’s too cool to find fault with.

“To be honest I think in a way it was a bad situation for her. Anybody who has that big of a blow up, there’s so much pressure implicit in that. I would be freaked out if that had happened to me early on. I’m happy for anybody who is going to be successful as long as they’re obviously not like supporting genocide or doing something terrible.”

This is not k.flay’s first rodeo. Her debut album, Suburban Rap Queen, came out in 2004. And the new album? She feels great about where she was at creatively when she made it. And so maybe now she’s ready for viral. Asked about projects for the future, besides the frenetic touring that will mark her 2012, her answer implies a readiness for the next step in what’ll hopefully be a long career.

“I’m down to do anything, down for whatever.”