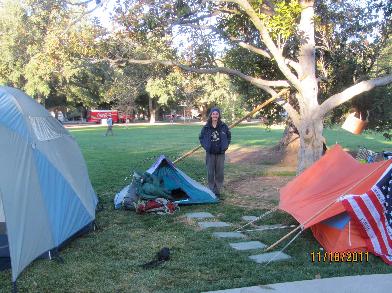 My granddaughter Madeline, a senior at the University of California-Davis, has been camping out with the Occupy movement at Davis.  And so I have been watching the demonstrations with outrage and awe.  Outrage at the pepper-spraying campus cops and the cowering Davis president Linda P.B. Katehi in her bunker. And with awe and admiration for the inspired and inspiring reaction of the Davis students. Let me summarize.

On Friday afternoon, the campus police moved to take down the tents of peaceful occupation on the campus.  Several protestors sat down on the sidewalk, linked arms, and refused to stand as the cops ordered. As bystanders chanted, “Don’t shoot the students, don’t shoot the students,”  the New York Times reported on Monday that “an officer shakes a pepper spray canister and walks before a line of seated protesters, spraying them. The protesters’ faces and clothes are quickly covered in the orange-tinted spray.

“Some protesters are heard screaming and crying as they are arrested. One bystander is heard shouting; “These are children! These are children!” The Times reported that 11 protesters were treated at the scene after being sprayed, and two of them were sent to the hospital.  Ten proresters were arrested on misdemeanor charges of unlawful assembly and failure to disperse and were later released, according to the Times.

According to the person recording the video, Lee Fang, Katehi had scheduled a 4pm press conference that was set to last an hour. During the press conference, protesters gathered outside the building and demanded to be heard, at which point Katehi refused to leave for several hours. Students eventually created a large pathway through which Katehi could leave and chanted “We are peaceful” until the Chancellor agreed to walk out to her car.

As you can see, the protesters’ silence is absolutely deafening. Having been a part of a supposedly “silent” march at Occupy Wall Street earlier this year, I was amazed at how unified the Occupy Davis protesters were. Also, right before Katehi gets into her car (at about the 1:36 mark), you can hear someone ask, “Did you feel at all trapped inside, Chancellor?” which is a direct reference to the justification the UC Davis police claimed for using pepper-spray during the protests. Phenomenal job, UC Davis protesters.

I have walked around the Davis campus and found what is happening there is happening on many other UC campuses: there is a vigorous building program at odds with all the talk of limited budgets and increased fees. I can see the massive UCSF/Mission Bay program from my office window on Mississippi Street at the bottom of Potrero Hill.  The buildings keep going up, the workmen keep working, the jolly press releases keep emerging, and the funds seem to gush forth without interruption.  Yet  the students and their families are screwed with ever escalating tuition and ever escalating debt–and all with little prospect for jobs after graduation. And California’s once world famous educational system is floundering in ignominy?  Can anyone in the UC administration cite a case where a campus building program has been stopped or seriously scaled back during this student and economic crisis? Thank God for students who know how to demonstratre peaceably and creatively.  Thank God for students who know how to force their chancellor to walk in shame before the world.