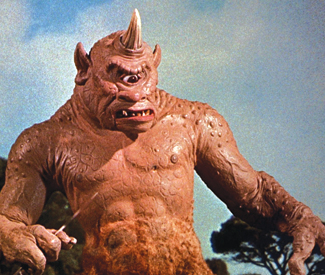 Fans of his work and films are in for a special treat Thursday and Friday, when Tippett will be appearing at the Pacific Film Archive in Berkeley as part of its “Behind the Scenes: The Art and Craft of Cinema” series. Tippett, who was born and raised in Berkeley, will give an illustrated talk, screening film clips from a variety of films that influenced him, then move on to cover his career, showing more clips and behind-the-scenes photos, and sharing personal anecdotes about working on different projects.

“King Kong came on television in 1955, when I was 4 years old, and my brain just couldn’t even comprehend what I was seeing. I guess parents didn’t care if kids watched stuff that freaked them out back then,” Tippett laughs.

“Then when I was seven, in ’58, I saw The 7th Voyage of Sinbad — it just totally knocked my socks off. I was never the same after that. It was like a lightning bolt had hit me, and over the years I just tried to figure out what that was that I was looking at, because it was just mesmerizing,” he remembers. “There weren’t really the trade periodicals and journals that they have today. The only thing we had was Forry Ackerman’s Famous Monsters of Filmland.”

Tippett religiously read the magazine, and eventually befriended Ackerman, who in turn introduced the budding filmmaker to Ray Harryhausen, the legendary stop motion animation pioneer who had worked on The 7th Voyage of Sinbad. Tippett went on to hone his stop-motion skills without the benefit of a formal education, gleaning what he could while offering to help out others already in the industry.

“I never took any film or animation classes or anything like that, but found the people that did, and availed myself to them — you know, throw some hay down in the back room somewhere and I’ll sleep there and help you out,” recalls Tippett. “I was just lucky, being in the right place at the right time.”

Although he remains humble, Tippett has created some of the most iconic images and scenes in modern movie history. Some of his most recognizable work includes the Imperial AT-AT Walkers and Tauntauns from 1980’s The Empire Strikes Back, the design of Jabba the Hutt in 1983’s Return of the Jedi, the ED-209 from Robocop, and several dinosaurs from Jurassic Park. Tippett has run his own studio based in Berkeley for the last 25 years, and is still very active in the movie business, with his company being involved with the production of current films such as Immortals, which came out last week.

Although the industry has largely shifted from stop motion animation to computer animation, and Tippett Studios is at the top of the game in that realm, Tippett himself still prefers the classic, old-school method to movie magic making.

“It’s the whole craft — it’s some kind of weird alchemy,” says Tippett. “You are just looking for this thing that’s always elusive and you always surprise yourself in what you find.”

“BEHIND THE SCENES: THE ART AND CRAFT OF CINEMA: PHIL TIPPETT, SPECIAL EFFECTS MASTER”