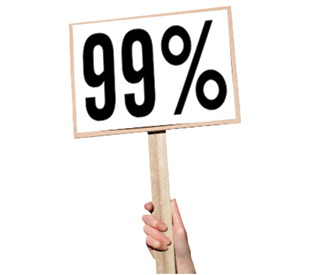 The police evictions of OccupyOakland and OccupyCal over the last week, and the looming threat of another attempt to evict OccupySF, presented challenges for the Bay Area protests just as similar police crackdowns targeted Occupy encampments in Portland, Denver, New York, and other cities nationwide.

These fast-moving developments also come at a time when university students from around California will be descending on San Francisco for a Nov. 16-17 University of California Board of Regents meeting that was canceled this week because of public safety concerns. All of this adds up to a big and unpredictable moment for the widening movement (see “The growing 99 percent,” 11/9).

So we’ve decided to start a regular feature to track the latest developments in an Occupy movement that seems adamant about standing its ground even as it’s forced to deal with threats from police, organizing challenges, and the coming of winter.

Students at the University of California at Berkeley burst onto the Occupy scene Nov. 9 with the launch of OccupyCal, a student-led protest that made waves nationally after university police advanced on around 500 students in Sproul Plaza, the historic epicenter of the Free Speech Movement, and struck them with batons after they tried to set up camp.

UCB police made 39 arrests in two separate actions against protesters, fueling student protesters’ resolve at a general assembly convened afterward that drew more than 1,000 people and lasted well into the night. At around 1:30 am, students voted to hold a student strike on Nov. 15 in solidarity with others throughout the UC system.

The harsh police response prompted condemnation from the Free Speech Movement Archives (FSM-A). “It appears that the campus police are in need of remedial education concerning fundamental protections offered by the US Constitution — including First Amendment rights to Free Speech and Free Assembly that were clearly recognized and enshrined on the UCB campus 47 years ago on these very steps,” the group noted in an open letter.

UC Berkeley Chancellor Robert J. Birgeneau, who was out of the country during the violent police crackdown, issued a statement on Nov. 14 ordering a third-party investigation of the clash and granting amnesty under the Student Code of Conduct to all students who were arrested for blocking police from removing the encampment.

“It was only yesterday that I was able to look at a number of the videos that were made of the protests on November 9. These videos are very disturbing. The events of last Wednesday are unworthy of us as a university community. Sadly, they point to the dilemma that we face in trying to prevent encampments and thereby mitigate long-term risks to the health and safety of our entire community,” he wrote. “Most certainly, we cannot condone any excessive use of force against any members of our community.”

#OCCUPYSF, THE NEXT BATTLEGROUND

At press time, student and labor groups that were planning to converge on the UC Regents meeting at UCSF Mission Bay on Nov. 16 by the thousands were deciding how to respond to the meeting cancellation, but protests are still planned for that day, with support from OccupySF.

Meanwhile, Mayor Ed Lee continues to insist that OccupySF break camp, but instead it has only grown larger, with the tents spreading out from Justin Herman Plaza onto the nearby sidewalk along Market Street in front of the Federal Reserve. At press time, protesters feared what seemed an imminent police raid, particularly now that the election is over and busloads of student protesters were headed into town.

On Nov. 10, Kayode Ola Foster, 25, suffered a fatal gunshot wound to the head following an argument, just yards from the Occupy Oakland encampment in Frank Ogawa Plaza (Oscar Grant Plaza to the occupiers who’d camped there for a solid month).

A somber mood settled over the plaza in the hours following the shooting as the tent city dwellers absorbed the gravity of the situation, and occupy activists held a candlelight vigil. Although initial reports suggested Foster had no relationship to the camp, police later said they believed he and one of two shooting suspects had spent time there.

#OCCUPYOAKLAND GETS THE BOOT

Three days after the fatal shooting near the OccupyOakland encampment sparked a hard-line response from local government officials, the camp was dismantled in an early morning police raid Nov. 14, the second to befall the occupation since it began a month ago. That evening, thousands marched back to the plaza in response to the raid and held a general assembly.

On the night of the raid, it took several hours for police to arrive at 14th and Broadway streets, where protesters began congregating in the intersection around 2 a.m. in anticipation of the forced eviction from camp. Law enforcement came en masse, with mutual aid support from seven different regional law enforcement agencies.

While two lines of riot police formed an L-shaped formation blocking protesters’ access to the plaza and nearby streets, hundreds more poured into the plaza to dismantle tents, flatten structures, and make arrests. Police arrested 32, the majority of whom belonged to a group of clergy members from the occupation’s Interfaith Coalition tent who sat calmly together in the plaza and sang by candlelight as they waited for police. Occupiers who witnessed the dismantling of the camp from behind police barricades yelled out, “Shame! Shame! Shame!”