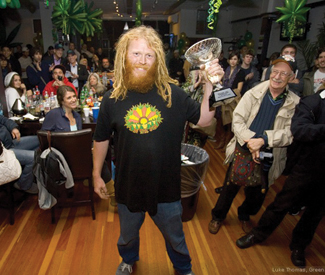 “I like the way you trim it/I got to bag it/Bag it up.” A ganja-fied version of Blackstreet’s “No Diggity” was playing over the speakers the night of Saturday, November 12 at 847 Lounge, an event space above the SoMa dispensary Green Door. The party’s mood was — yes — high as patients awaited the announcement of the winners in three categories of cannabis products at the Patient’s Choice awards ceremony, conversation with the activists and patients assembled in the room veered towards the serious.

Medical marijuana activist Mellody Gannon enjoyed the scene from a table in the center of the room: “As a patient, it’s really important right now that things like this are going on,” she said. Amid puzzling federal crackdowns, the future of her medicine is smoky. Recent pressure from the Department of Justice on landlords and banks has caused many dispensaries to consider shutting their doors (see “Feds crack down,” 10/12/11).

Which is why she was heartened to see cannabis connoisseurs coming together to celebrate the best of what California cannabis producers have to offer.

This year’s Patient’s Choice event was a much more intimate affair. Attendance was open to the public in 2010, but this year was limited to dispensary staff, activists, and the patients who had paid the $350 for a judge’s testing package. Judges had to sample over 30 strains (not to mention other products) in the 10 days leading up to Friday, when their votes were tallied and winners announced to stoned elation.

The event, sponsored by many of the city’s best-known dispensaries, was a fundraiser for Americans for Safe Access (ASA), an organization that promotes secure and available ways for prescribed patients to access medical marijuana.

Gannon, a patient since 1996, said that ASA’s advocacy is important — many times her doctors have turned up their nose at the medical efficacy of her marijuana prescription. “They tell you that you’re crazy or just a pothead,” she said.

After breaking a host of bones in a car accident, she relies on cannabis to mitigate chronic pain. “If they start closing these clubs, where are you going to go?” she asked.

Lynette Shaw sat nearby, smoking a strain home-grown buds she’s named Bonanza Jellybean. Shaw founded the Marin Alliance dispensary in Fairfax in 1997 after working on the Proposition 215 campaign the year before. She obtained special zoning from the city for the dispensary and insisted “we’ve done everything they told us to, even when the rules changed. We’re completely regulated to the satisfaction of the community.”

Nonetheless, one of the Department of Justice’s cease-and-desist letters landed in the mailbox of her landlord. Now unless something changes, Shaw’s dispensary — located in a county with one of the highest rates of breast cancer in the nation — will be out on the streets. Her landlord was threatened with 40 years in prison for renting to an illegal drug trafficker.

While others have pegged the Obama administration’s about-face on the tolerance of medical cannabis to election year grandstanding, Shaw thinks the persecution of state-legal marijuana operations like her own is a harbinger of much more dire civil rights violations.

“They’re trying to break the Constitution over marijuana. That’s why it’s important that we fight back now,” she said.

It was clear from the crowd at 847 Lounge that the medical marijuana movement wasn’t going to lose their meds without a fight. Perhaps strangely, the family producers that proudly hoisted their glass, Stanley Cup-looking trophies for best strain and other products still had an air of winning about them.