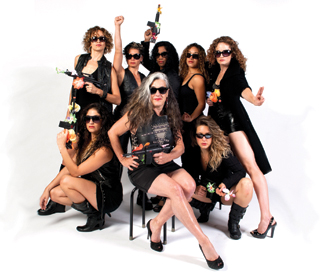 DANCE Early in the 20th century, Ezra Pound declared “the artist is the antenna of the race.” True or false? Do artists have the ability to predict the future, or are they stuck in the present?

Krissy Keefer, artistic director of Dance Brigade and Dance Mission Theater, tends to side with Pound. While she wouldn’t go as far as writer-performer Guillermo Gómez-Peña, who considers the artist a shaman, she does think that “there is something about the artistic process that opens your brain to see into the future, to see things happening before they actually happen.”

This weekend Keefer and her troupe are celebrating the 35th anniversary of Dance Brigade and its antecedents the Wallflower Order. The performances, all with free admission, include a retrospective of works spanning the last three decades, plus the 2009 Great Liberation Upon Hearing, based on the Tibetan Book of the Dead; Keefer created the work after losing two close friends within the same year.

Women taking charge of their own fate may not be news today, but in 1975, Wallflower’s five female warriors were pioneers. The turmoil of the post-Vietnam era and the rise of feminism had created a climate in which audiences hungered for dance that spoke to their lives. Many of them were women. The company was made up of contentious women, strong dancers, committed activists. They were not about to be stopped, much like their “grandmothers” Isadora Duncan and Martha Graham or, in terms of politics, the characters in 1964 Chinese ballet The Red Detachment of Women.

Most remarkably, Keefer’s commitment to make art addressing issues that matter has not waned — she’s as ready as ever to mount the barricades and make her voice heard through art. In retrospect, it is surprising how much of her past work was highly prescient.

She recently called my attention to my reservations about her having drenched one section of the 2002 Cave Women in images of extreme destruction and war. (At the time, the bloodiness seemed over the top). Almost immediately, all hell broke loose in Afghanistan and the Middle East. Revolutionary Nutcracker Sweetie, a huge success from 1987-1997, features one-percenters the McGreed family, an abused undocumented servant in Clara, and a homeless Sugar Plum Fairy. Issues that were under the radar at the time have become headlines.

For all her predilection for “making art that includes themes of social responsibility and dealing with real situations with real people,” Keefer is also very much a creature of the theater. The work has to stand on its artistic feet, perhaps not surprising for a woman who trained as dancer at age six — long before she knew what she wanted to dance about.

The 2005 Dry/Ice, a look at the effects of global warming, for instance, was a commission from the San Francisco International Arts Festival. Now who else, except someone who besotted by the stage, would lug a cast-iron bathtub, weighing over 300 pounds, into Theater Artaud for two performances? “I just wanted to do something about the environment,” she recalls. (Al Gore’s An Inconvenient Truth came out the next year.)

In the 2004 Spell, a collaboration with Hennessy, Keefer became a raging goddess-witch figure doing an exorcism for peace and economic justice. It was a power performance that, given the lives many people have today, probably would play well in the suburbs.

Keefer also takes her social activism outside the theater. In 2000, when she felt that the criteria for acceptance to the San Francisco Ballet School were unjustifiable — based on the experiences of her daughter, eight years old at the time — she complained loud and clear. It started discussions about the female dancer’s body at the time when academics had barely touched the subject. In 2006, she was so furious about the country’s priorities that she ran for Congress. Of course, she knew that she wouldn’t win — but she wanted to take a stand. Even her parents encouraged her to do so. “I can’t believe that I ran against Nancy Pelosi when she was poised to become Speaker of the House,” she laughs today.

Meditation has helped Keefer step away from anger, what she called her “habitual response” to injustice. The resolve was shaken, however, this past summer, when — coming back from a successful East Coast and Caribbean tour with Liberation — all the costumes (transported via Greyhound, the only shipping the company could afford) were stolen. “What can you do?” she shrugs. This Mother Courage of dance will just put her shoulder to the wheel a little harder.

“FROM WALLFLOWER ORDER TO DANCE BRIGADE: A 35-YEAR RETROSPECTIVE CELEBRATION”

“MORE THAN THE SUM OF ITS PARTS:” LOCAL ARTS LUMINARIES TOAST DANCE BRIGADE

DANCE From Brady Street to Dance Mission and beyond, Krissy [Keefer] has been one of the true champions of our dance community, in no small part due to her own artistry. The spirit of her work is visually and musically rich, fundamentally diverse, and deeply committed to social relevance — attributes she’s manifested on so many levels in a long and vital career. Rob Bailis, Former Artistic Director, ODC Theater

In the dance ecology of the Bay Area, Dance Brigade, and especially Krissy Keefer, play such vital role. I can’t think of anyone else as fierce about what she believes in, what she cares about, and how she creates work to reflect those beliefs. In many ways she is our conscience when we might waver in the face of budget cuts and the endless struggle to get money to do work. Because she is so strong about this herself, I really count on her to keep us honest around our vision and our integrity of purpose. Kenneth J. Foster, Executive Director, Yerba Buena Center for the Arts

Krissy Keefer’s life energy is totally invested in professional, community-based, inclusive, and affordable feminist art. She has consistently supported women artists for over 30 years. It is no easy task to maintain an artistic vision and a financially secure organization, and to be able to deal with the high volume of traffic that is required to run a studio anywhere, much less in the most expensive city in the U.S. That piece of real estate at 24th and Mission has always been a port in the storm for the dance community. Mary Alice Fry, Artistic Director, Footloose Dance Company and Shotwell Studios

What makes Dance Brigade’s work special and important is how they take on the big issues facing the world and then find a way to make us laugh. Krissy Keefer is the Jon Stewart of the dance world! Krissy’s perspective, passion and tenacity are testament to the company’s longevity; that a Dance Brigade show dealing with war, greed, or even addressing violence towards women, can be entertaining is powerful. Krissy, in her wonderfully brash and focused manner, has the ability to remind us that we are citizen-dancers, that we need to participate, and that big messages, abstract dance and the hope for social change can happily co-exist on stage. Wayne Hazzard, Executive Director, Dancers’ Group

Dance Brigade’s legacy in the Bay Area is huge. By not allowing their company to become mainstream, they paved the way for alternate companies to see that there is a place at the table for work that is not shiny, slick and influenced by institutional homogenization. Dance Brigade has demonstrated by example that contemporary dance can be messy, political, and uncomfortable. By blurring the lines between politics and art, a whole new generation of politicized artists have been given permission to emerge and that has infused Bay Area dance with a lot of new ideas and energy. Joe Landini, Director, The Garage

Krissy and the Dance Brigade have been at the forefront of bringing political concerns into the theater. They have paved the way, both artistically and practically, for dozens of politically engaged artists who may or may not identify with their work. To me, Dance Mission is a physical embodiment of the importance of the Dance Brigade’s values of democracy. It’s not easy to separate the artistic and the community legacy of Dance Brigade’s work; it’s the combination that makes them so powerful. Jessica Robinson Love, Executive and Artistic Director, CounterPULSE

When Dance Brigade emerged in San Francisco in the mid-’80s as an outgrowth of the nearly-mythical Wallflower Order, they brought together a number of tendencies that were already percolating in the dance community: using dancers of widely varying body types, introducing world music (sometimes performed by the dancers), spoken word, and text narrative, circus and vaudeville tricks and, always, no-holds-barred political content. Dance Brigade inspired other companies to be braver through their example of what might be called gonzo feminist dance. Krissy and her dancers and collaborators took these disparate influences and turned them into powerhouse performances where the whole was more than the sum of its parts. Kary Schulman, Director, Grants for the Arts. (Compiled by Rita Felciano)