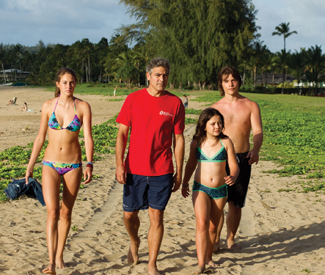 FILM Alexander Payne turned 50 this year, and surely ranks somewhere on the list of American directors (and scenarists) whose efforts are counted on as a reliable plus. Yet he’s only been at it for 15 years, making just five features — a decent number, until you realize it’s been seven years since the last one. By contrast, since 2004 Woody Allen has made eight features, a couple his best in some time. Still, not one of those is as good as Sideways.

Like all Payne’s films save 1996 debut Citizen Ruth, The Descendants is an adaptation, this time from Kaui Hart Hemmings’ excellent 2007 novel. It’s the kind of book whose story scale is ideal for a movie — nothing important need be cut — even if its very literary pleasures of tone, style, and voice might resist translation.

Matt King (George Clooney) is a Honolulu lawyer burdened by various things, mostly a) being a haole (i.e. white) person nonetheless descended from Hawaiian royalty, rich in real estate most natives figure his kind stole from them; and b) being father to two children by a wife who’s been in a coma since a boating accident three weeks ago. Already having a hard time transitioning from workaholic to hands-on dad, Matt soon finds out this new role is permanent, like it or not — spouse Elizabeth (Patricia Hastie, just briefly seen animate) will not wake up, and her living will requires life support end should such a circumstance arise.

The Descendants covers the few days in which Matt has to share this news with Elizabeth’s loved ones, mostly notably Shailene Woodley and Amara Miller as disparately rebellious teen and 10-year-old daughters. (Also notable, for less poignant reasons, is Robert Forster as the wife’s obnoxious, bullying, blindsided father.)

Meanwhile, there is the inconvenient and pressing business of 25,000 inherited Kauai acres — a last great chunk of unsullied “paradise” — which most of the extended King clan want sold to a big developer for a cool half billion bucks. Matt’s reluctant status as primary trustee makes him appear like the very definition of haole greed, even if his family’s roots go back here 150 years.

Last, there’s the unpleasant discovery that the glam, sporty, demanding wife he’d increasingly seemed “not enough” for had indeed been looking elsewhere and found it, in a casting surprise I’ll leave unspoiled.

The novel’s sly, self-deprecating wit is posited as Matt’s own. Reading it, Paul Rudd seemed a perfect choice. When has George Clooney suggested insecurity enough to play a man afraid he’s too small in character for a larger-than-life spouse? But dressed here in oversized shorts and Hawaiian shirts, the usually suave performer looks shrunken and paunchy, like any middling h.s. athlete turned desk jockey; his hooded eyes convey the stung joke’s-on-me viewpoint of someone who figures acknowledging depression would be an undeserved indulgence. Clooney has only fairly recently become as much an actor as a movie star. He’ll probably never have great range. But if this is his Oscar turn, we could all do a lot worse. (Such as Leonardo DiCaprio’s J. Edger Hoover, the showy-miscasting antithesis to nuanced understatement.)

Payne’s film can’t translate all the book’s rueful hilarity, fit in much marital backstory, or quite get across the evolving weirdness of Miller’s Scottie — though the young actors are fine, not least Nick Krause as Sid, the boorish yet useful teenaged tool Woodley’s Alex insists on bringing along as an ally.

These are small quibbles, anyway. The Descendants is hardly The Tree of Life — yay — but its reined-in observations of odd yet relatable adult and family lives are all the more satisfying for lack of grandiose ambition. There are moments here when Payne’s restraint itself is a thing of beauty, like a discreet late cut to some landscape shots where shameless tearduct-milking would normally go. The oil-and-water seriocomedy of a well-intentioned recent movies like 50/50 reveals how tricky this director’s customary feat really is, of making the serious and the comic blend together seamlessly.