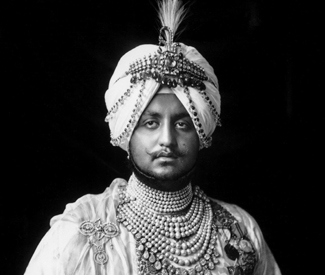 HAIRY EYEBALL “Why curate an exhibition focused on a single country in an age of disappearing boundaries?” is one of the questions posed by the curatorial text at the start of “The Matter Within: New Contemporary Art from India,” Yerba Buena Center for the Arts’ survey of recent photography, sculpture, and video from the subcontinent.

One obvious answer is, “Why not?” The recent historic record gives plenty of reason enough. Despite all those “disappearing boundaries” and the wider circulation of art and ideas and artists around the globe, there is the fact that, perhaps with the exception of Chinese art, comprehensive displays of contemporary art from non-Western countries are proportionally much rarer in major Western institutions, especially those in the US.

There is also the issue of timeliness. Although India’s transformation into a leading global economic player is not news, the impact that growth has had on the arts and the art market still is. An Artinfo.com headline asked only last week, “Is India Becoming the World’s Hub for Internet Art Commerce?” (with the related article on the blue chip, Internet-based art fair, India Art Collective, making a persuasive case for “yes”).

But the most compelling reasons for The Matter Within are offered by the art itself. Alternately playful and reflective, packing visual pop and demanding of deeper consideration, the exhibit’s pieces are as densely-packed with ideas, portraits, and questions about what and who comprises as complex an entity as “India,” and also what India’s future might look like when reflected in its past and present, as YBCA’s galleries are chock-a-block with things to look at.

This breadth is both “The Matter Within”‘s greatest curatorial strength and the source of some of its practical weak spots, particular in regards to how it is installed. There is simply more art here than YBCA can comfortably accommodate, as well as intriguing omissions (why no paintings?). Different series by the same artist are spread across the space’s two main galleries, something not explicitly stated in the wall didactics, which often address both bodies of work but are positioned alongside only one of them.

This is all the more frustrating since not everything in the show necessarily deserves inclusion. Sunil Gupta’s photo-story Sun City, which recasts the heterosexual relationship at the center of Chris Marker’s 1962 science fiction film La Jetee as a trans-national homosexual one played out against the backdrop of AIDS rather than nuclear annihilation, is a moving engagement with both the film it references and the shifting valences of minoritarian sexuality and desirability across borders.

His large-scale, multi-portrait narratives focusing on gender-ambiguous couples in the next room over, however, is less compelling and lacks the directness with which Tejal Shah documents the female masculinity of her transsexual and transgender subjects in the photo series and digital slide show, “I Am.” Shah’s portraits would’ve made for a smart counterpoint to Pushpamala N.’s “Native Types” series — in which the photographer appears as various Indian female archetypes culled from art history, pop culture, and religion— that instead are hung across from Nikhil Chopra’s equally costume and prop-heavy, yet less conceptually tight, photos and video in the show’s entry gallery.

Similarly, Rina Banerjee’s Frankensteinian sculptures of colonial-era antiquities and costly animal remnants, although rich with historical allusion, simply look busy compared to Siddartha Karawall’s giant send-up of a horse and rider statue Hangover Man, made from wax-covered T-shirts that had originally been donated to poor communities in India by an American charity but got re-routed to the open market. The rider in question is the former Maharaja after whom Karwall’s art school was named, who now appears as a Don Quixote-like wraith representative of the gulf between Western goodwill and the Indian “ground truth” of need and impoverishment it is supposedly addressing.

A different sort of disconnect haunts the Asian Art Museum’s “Maharaja: The Splendor of India’s Royal Courts,” the other major exhibit in town currently devoted to India. Maharaja means “great king” or “high king” in Sanskrit, a status expressed in the breathtaking level of sumptuousness and luxury of the material items through which Indian rulers displayed their power.

Light on historical context and heavy on the baubles, Maharaja offers up a seemingly endless parade of such items: extravagantly embroidered textiles, magnificent ceremonial accouterments, and enough serious bling to outshine the borrowed sparkles of any contemporary red carpet. The effect is strangely flattening. Monarchy is the golden goose that produces marvelous things rather than a larger institution, the spoils of which only tell one part of a more complex and usually bloody story.

Thus, what Maharaja leaves largely unaddressed are questions of power and history, as well as the politics of display. For example, what was the cost in human labor (and perhaps lives) to spin and weave the silk necessary to make the stunning 18th Century bridal gown in the second gallery? Or to mine the diamonds, rubies, and emeralds that emblazon so many of the items displayed?

The fact that the majority of the artifacts come from London’s Victoria and Albert Museum –an official co-presenter of the exhibit— speaks more to the legacy of British colonial rule than the brief gloss the Raj and its aftermath receive in the show’s third gallery, which crams in most of Maharaja’s history lessons. And judging from the case of various Cartier commissions from the 1920s and ’30s, and the gorgeous modern furniture commissioned by Yeshwant Rao Holkar II (a jazz age jetsetter and friend of Man Ray’s who is the exhibit’s breakout star), India’s deposed royals did pretty well for themselves, even as the times changed around them.

But then again, that the already powerful would continue being high rollers is not really news. As Mel Brooks pointed out long ago, it’s good to be the king.

THE MATTER WITHIN: NEW CONTEMPORARY OF INDIA