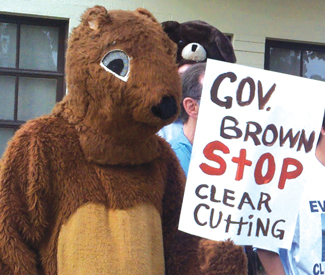 Protestors in flashy animal costumes picketed the appearance of infamous logger Archie “Red” Emerson, who was giving a guest lecture to the Forestry Department, at the University of California Berkeley campus on Oct. 14 to bring awareness to the increasing use of environmentally destructive logging practices.

The protesters were admittedly having fun parading around as skunks and beavers, but there was a heavy point to go with the theatrics. Emerson’s company, Sierra Pacific Industries (SPI) is being targeted by a new campaign to curtail and eventually eradicate the destructive logging technique called “clearcutting.”

The Redding-based Battle Creek Alliance, in cooperation with the Sierra Club, wants Californians to push for environmental protection measures that would ban clearcutting on the state level.

“We’re building a statewide coalition of people from all across the state — and hopefully, eventually, all across the country — who can be helping to call on the state of California and Gov. Brown to stop clearcutting and to protect our forests, watersheds, and wildlife,” said Sierra Club member Sarah Matsumoto, an East Bay resident who has joined the Battle Creek Alliance.

“I live about a mile from most of the clearcutting,” said Patty Gomez, a resident of the Battle Creek area. “We like to call it ground zero.”

The term clearcutting describes the complete eradication of trees and shrubs from forest areas, some the size of Golden Gate Park. The area is then doused with thousands of gallons of herbicides and then replanted as a tree farm.

“SPI own[s] so much land and potentially controls the fate of the forest,” said Beck. “SPI is the poster child for the one percent.” Because of SPI’s scorched-earth policy of completely clearing an area and sterilizing it for replanting, biologists are concerned that crucial plant species will soon become extinct.

“After clearcutting, there is a huge flush of sprouting natural regeneration of native species,” said veteran biologist Vivian Parker, who has lived in the Battle Creek area for 30 years and has worked for the U.S. Forest Service. “When the newly sprouting plant layer is sprayed with chemical herbicides and thus eliminated, the plants do not get a chance to grow and shed their seed.”

Parker argues that this interruption of natural regeneration over several periods of clearcutting will destroy the natural growth of plant life necessary to maintain a healthy forest.

This copious use of herbicides has also been suspect in a strange phenomenon affecting wildlife in North America. According to a study conducted by UC Berkeley professor of endocrinology Tyron Hayes, the use of herbicides, even at extremely small amounts, have been linked to biological mutations such as male frogs growing ovaries.

SPI is insistent that its practices are environmentally sound and internally regulated.

“We monitor all of our own activities to see where we have room for improvement,” Mark Pawlicki, director of Corporate Affairs and Sustainability at SPI, told the Guardian. “In many cases we’ve changed our practices.” New research on the effects of these herbicides have shown that current regulations don’t always address the cumulative impacts of chemical applications and other practices.

“We now know that it is the very diluted amounts of chemicals that [have the potential to] cause the most damage because they behave just like hormones,” Parker said. “The quantities are so small you can barely measure [them], but they have a disproportionate effect.”

Hayes’ study was publicized in a press release several years ago by ForestEthics, an environmental nonprofit intimately involved with campaigning against SPI’s environmentally destructive practices.

“After that release, we started getting calls from families,” said ForestEthics communication director Will Craven. “One family had a six-year-old daughter who developed brain cancer.”

Craven said the family lived across from one of SPI’s mills and close to clearcut areas. He had heard of families developing severe endocrine issues where they could no longer digest fruit or sugar.

Pawlicki cites studies done internally by scientists about the biodiversity of SPI’s land, stating that the proper measures have been taken to put aside enough land for endangered species like the spotted owls and that the effect of the herbicides are negligible if not insignificant.

“People make allegations all the time about us but there’s just no proof,” said Pawlicki. “Show us the proof, tell us the evidence that we’re harming anything.”

Marily Woodhouse, a resident of the Battle Creek area who has been a particularly passionate adversary of SPI, has spearheaded efforts to collect sufficient information in order for the Central Valley Regional Water Quality Control Board and the California Natural Resources Agency to take legal action; a process she said SPI has tried to undermine.

However, these studies have a financial limit. Some tests can cost up to thousands of dollars, and ensuring that the tests are targeting specific herbicides used by SPI can be a guessing game. SPI is only required to disclose chemical use to the California Department of Pesticide regulation once a month and a yearly report can be requested, but this information is not disclosed to the public at the time of application.

The Water Board, a subsidiary of the Environmental Protection Agency, has conducted water tests and found no significant amount of chemicals in nearby watershed, but Parker said she believes this is because the agency doesn’t test for the specific chemicals used by SPI.

“Although they could request this information from the industry, the water board doesn’t know which chemicals are used, the quantities, or locations where they are applied,” Parker said. “Lack of information and inadequate testing ensures that the company is able to continue doing business.”

Residents and environmental groups have filed several lawsuits against SPI for more than 34 environmental and health policy violations, but have not been successful in curbing SPI’s destructive practices. According to legal experts, this is not necessarily because they don’t have a valid case.

“When you’re challenging these actions by SPI, what you’re really doing is challenging a decision by a state agency for approving their logging plan,” said Justin Augustine a staff attorney at the Center for Biological Diversity. “The agency can get deference from the court when it makes a good decision or a bad decision.”

The state agency Augustine is talking about is the California Department of Fire and Forestry Protection (Cal Fire). In the hierarchy of state agencies, Cal Fire sits next to the Department of Fish and Game and both are directly under the Natural Resources Agency. Each department plays a role in monitoring and enforcing logging practices and code violations.

Logging companies are required to file a Timber Harvesting Plan that describes the biodiversity of plant life, acreage, and wildlife of an area meant for harvesting. Cal Fire then approves or rejects the plan within 10 days of receipt. This approval process shields SPI from directly facing charges in court because Cal Fire is ultimately responsible for approving the plan.

Sierra Club and the Battle Creek Alliance are now fighting for legislation that will bar the use of clearcutting altogether.

“[SPI] could minimize clearcutting. The method is not appropriate to today’s forests,” said Beck. “We are demanding that they make the change to completely stop clearcutting.”

A new report by the State Water Resources Control Board regarding SPI is scheduled to be presented at a Board of Forestry hearing on Nov. 9, describing whether or not sediment from the clearcuts is reaching the creeks and harming the valuable salmon recovery project. The report is available on the Board of Forestry website.

“[There has been] a lot of evidence that the logging roads have to do with the sedimentation,” said Richard Stapler, deputy secretary of communications at the Natural Resources Agency. “It was brought to our attention by Marily Woodhouse, and is very much worth review.”

The review may bring about protections for the Battle Creek watershed, but activists remain focused on legislation to prohibit clearcutting on a broad scale. “Right now the only things valued are the short term profit for the timber industry,” said Beck. “There needs to be a change in the way the forests are managed”