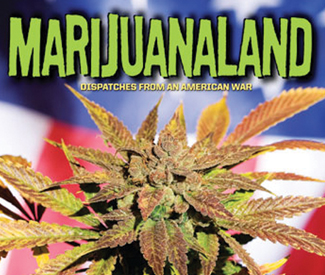 HERBWISE Marijuana is California’s top cash crop, one that has had a major impact on the state, particularly since it was legalized for medical use in 1996. Nowhere is that impact felt more than in the global epicenter of pot production, the fabled Emerald Triangle — the rural northern counties of Humboldt, Menodocino, and Trinity — which has been transformed by the cannabis boom, in ways good and bad.

In his new book, Marijuanaland: Dispatches from an American War, author Jonah Raskin offers an insider’s look at the pot-fueled evolution of the people, politics, economics, and culture of the region. The fascinating journey — mixing personal stories with deep investigative reporting — begins in 1977 when Raskin harvested his lawyer/rancher father’s secret pot patch after he died from cancer and continues through last year’s defeat of Prop. 19, the measure that would have legalized even recreational marijuana use but which was opposed by many growers seeking to protect their market share.

Along the way, we meet a wide variety of cultivators, from back-to-the-land hippies to their entrepreneurial grandchildren, as well as the cops, community leaders, lawyers, journalists, and others touched by the marijuana trade — which in the Emerald Triangle, is pretty much everyone.

The book, published by High Times magazine, is certainly a celebration of the wonder weed and harsh condemnation of the federal government’s long-lingering war on it. Raskin — a Sonoma State University communications professor who has authored 14 books, including 2009’s Field Days about food politics — is revealingly honest about his love of marijuana and support for his fellow smokers.

“This book is in part a story about coming out of the marijuana closet,” Raskin told me. “I don’t want to out anyone but I will say this, that famous journalists who smoked marijuana stopped smoking it when they wrote and published books about marijuana so that when they were asked after publication ‘Do you smoke pot?’ they could honestly say, ‘No I do not.’ I don’t pressure anyone to come out. It’s an individual choice. But I do think that individuals and the whole society need to come out and come clean about marijuana. It has been a dirty little secret for far too long. I also wanted to prove that we are at a place in California where you can admit to smoking and not have adverse things happen to you.”

Yet Raskin also writes critically about the marijuana industry and the greed, secrecy, social problems, criminality, and economic homogenization that it has spawned in a part of California that once passionately eschewed some of these very forces. True, much of the problem stems from prohibition rather than pot production itself, but his warts-and-all approach is a refreshing perspective on an industry that tends be either demonized or glamorized — so much so that the book almost didn’t get published.

“I had to twist some arms and I had some inside help — the fact that High Times was willing to publish a book that didn’t paint an entirely rosy picture also shows that they have grown up and that they felt strongly enough about the book and themselves to publish it,” Raskin told me.

That kind of journalism — which sees marijuana as an important California industry, but one deserving of more scrutiny and sunshine — is also practiced by a pair of regional journalists included in the book: Anderson Valley Advertiser publisher Bruce Anderson and Arcata Eye editor Kevin Hoover. Along with Raskin — and perhaps us here at the Guardian — these journalists have helped create the beginnings of an honest public dialogue about this booming industry. And as Californians try to fend off the latest law enforcement assault (see “Feds crack down,” 10/11) and prepare another legalization push as soon as next year, Marijuanaland is an important contributor to that conversation.