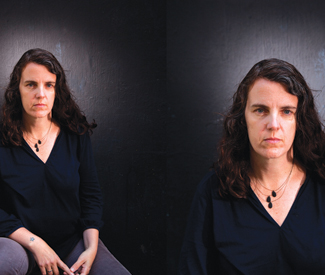 GOLDIES The beds in the photographs are like any other unmade beds — messes of rumpled sheets and dented pillows occasionally punctuated by a stray article of clothing or a curious pet. Except that they are not like other beds: they are, as the title of Tammy Rae Carland’s 2002 series of depopulated portraits informs the viewer, “lesbian beds.”

The distinction is crucial, critical. A smart conceptual retort to the hoary stereotype of lesbian bed death, Carland’s photographs of one of the places where women share their lives (and their bodies) with other women also make clear the political stakes of representing even the most quotidian objects.

At the same time, there is nothing in or about the photographs that signifies “lesbian.” Indeed, it is very banality of the images’ content, the very familiarity of the scene that is repeatedly depicted in “Lesbian Beds,” that makes them so immediately relatable. And yet to uncouple these photographs from the title which brackets them would be to disregard the difference the entire series makes visible.

This sometimes uneasy mix of representational politics and sentimental attachment to objects is at the core of Carland’s work. She cites her longtime involvement in the queer and feminist punk scenes that sprung up in Pacific Northwest in the early ’90s — where she made zines, ran a gallery space, booked shows and, later, ran the successful and politically progressive indie label Mr. Lady Records with her partner — as a catalyst for her interest in, “marginal identities and marginal bodies.”

“[And] not just in regards to sites of oppression,” explains Carland — who has lived in Oakland for close to a decade and now chairs the California College of the Arts’ photography department — “but alternative sites where people function.” It is often the material possessions accumulated at those sites, rather than the people themselves, that catch Carland’s sympathetic eye and form the genesis for a new project. For her series “Outposts,” it was the (unpopulated) encampments within the “women born, women only” space of the Michigan Womyn’s Music Festival. In “My Inheritance,” Carland turned the camera on the inventory of her late mother’s apartment — the entirety of which could fit in a paper grocery bag.

Carland’s latest project, “I’m Dying Up Here,” which was recently featured as part of Yerba Buena Center for the Arts’s triennial Bay Area Now 6, takes a different tack, focusing on stand-up comedy and the figure of the self-deprecating comedian. Pieces include staged photographs of local female performers, their faces often obscured, caught mid-routine, as well as a bar stool and microphone — the tools of the trade — cast in white porcelain.

Like beds, the comedy club stage is also a site of vulnerability, albeit a public one. For female comedians, the price of admission is often predicated on making themselves the butt of their own jokes. The melancholy and tender pieces in “I’m Dying Up Here” convey that moment, pregnant with empowerment but also the threat of rejection. A joke, like an artwork, can always flop or the audience just might not get it. A bed is just a bed; but then it isn’t, if two women share it. Carland’s work routinely foregrounds this riskiness while extending a reassuring hand as if to say, “it’s ok if this fails, because we both still tried.”