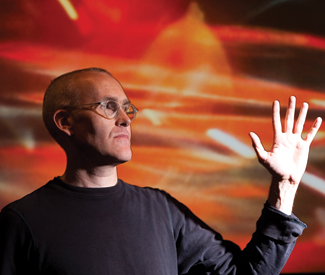 GOLDIES Whether we’re talking about his verging live projections or crystalline short films, Paul Clipson makes things happen onscreen. His exploratory form of lyricism is composed for Super 8 film. That for is critical, since Clipson shoots with a well-practiced intuition for what shows up as gold in Super 8 (an increasingly rare form of presentiment). While taking great advantage of the small-gauge camera’s pencil-like responsiveness to movement, Clipson works from a keen appreciation for the interrelation between fine-grained detail and expansive volumes. In the words of Gaston Bachelard, a writer Clipson admires, “Sometimes the transactions between small and large multiply, have repercussions.” Clipson’s intensive approach in both shooting and projecting his work definitely angles towards a repercussive cinema.

Compound Eyes, a series of short subjects created with musician Jefre Cantu-Ledesma during a recent residency at the San Francisco Exploratorium, puts a fine point on the phenomenological tuning of Clipson’s art. The images envision insect life in a manner unlike traditional nature documentaries, with Clipson’s suggestible camera swallowed in an unfamiliar network of spatial relations and glistening surfaces. Urban architectures emerge in juxtaposition, freshly uncertain in the face of our new sense of scale and environmental experience. Clipson tells me about chasing “the startling fact of the insect’s existence” one recent sunny afternoon. “To understand the animal,” he says, “you have to understand how it understands space — which we can’t do. What’s important to me than is sensitizing the view and creating an awareness of how the space is traversed.”

Discovery is primary to Clipson’s work, not only in his cinematographic concentration of visual phenomena, but also in his oblique tangents upon highly specific shards of film history, and especially in his approach to live performance. The shows place Clipson’s footage in dynamic relation to music performed by artists equally concerned with dynamics of time and space (many of them record for Cantu-Ledesma’s Root Strata label). For the audience, it means a good shot at a heightened state of being.

In all iterations, Clipson’s images are delighted by the ephemerality of that which passes before the camera (“I like the idea that [the insects] leave very quickly and that it’s this continual chase rather than something conditioned”). At the same time, the films realize a remarkable persistence of vision. Clipson’s open channeling of inspiration makes his films as instructive as they are beautiful; it also delivers the good news that there’s more to come.