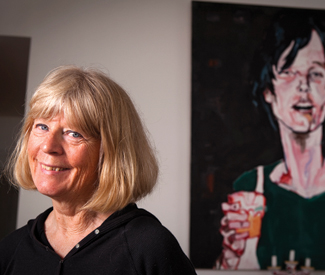 GOLDIES In a city that boasts far more film festivals than movie theaters, one of the most singularly focused is the annual Berlin and Beyond Film Festival — the largest German-language film festival in the United States. Carefully curated for 14 years by Dr. Ingrid Eggers, former program coordinator of the San Francisco branch of the Goethe-Institut, Berlin and Beyond has showcased an eclectic mix of movies by established filmmakers, debut features, documentaries, shorts, and silent films, from Germany, Austria, and Switzerland. Eggers’ major criteria — that the movies be filmed primarily in German, a language she felt was often missing from San Francisco’s foreign film scene — still left plenty of room for variety. Over the years, quirky documentaries about East German break dancers (Nico Raschick’s 2006 Here We Come) have shared screen space with gritty culture clashes such as Fatih Akin’s 2004 Head-On, wartime dramas such as Margarethe von Trotta’s 2003 Rosenstrasse, and non-traditional romances, such as Andreas Dresen’s 2008 Cloud 9.

Now, two-and-a-half years after her unanticipated removal from the Berlin and Beyond helm, which shocked the San Francisco film community, Eggers insists on looking forward. “We have made our peace,” she says genially, referring to the current incarnation of Berlin and Beyond, which just celebrated its sweet 16 in October.

When Eggers talks film, whether in a café in the Mission or on the stage of the Castro Theatre, her whole face lights up, a beatific glow. She may have reached Germany’s mandatory retirement age of 65 a few years ago, but her youthful vigor attests to a university background in physical education (along with history and literature) and her personal propensity for sport. Every film of the over 500 she’s presented — from the smallest short to the biggest blockbuster — has received a notably warm introduction, and more than one person has remarked in my presence that it is as if she were born to be a festival host. Yet it’s Eggers’ unassuming, collaborative nature rather than any kind of cult of personality that made Berlin and Beyond so successful. For example, it was by working closely with Anita Monga, former Castro programmer, that Eggers learned the ropes of festival scheduling.

“For our opening night in 1996 she insisted we show Fassbinder’s Martha,” Eggers reminisces. “A very difficult film; we had people walk out.”

From early partnerships with the then-San Francisco-based International Film Financing Conference and Kinofest Lünen, a sister festival in Germany’s North Rhine-Westphalia state, to later ones with corporate sponsors such as Kuehne + Nagel, who underwrote the shipping costs of the film canisters, Eggers’ ability to forge unique partnerships has served her in good stead. Her current film festival project — the smaller-scale German Gems — is set to screen for a third year in January 2012.

After that, Eggers is not so sure. “It’s incredibly expensive to put on even such a small festival,” she admits ruefully, though her many years of festival directing has provided her with the unquantifiable currency of influence. The first German Gems festival, a jam-packed day in 2010 at the Castro (with an encore performance in Point Arena), included von Trotta’s biopic of Hildegarde von Bingen, Vision, and received an official blessing from Dieter Kosslick, director of the prestigious Berlin International Film Festival.

Since she’s less interested in competing with than enhancing the selections at Berlin and Beyond, Eggers has shifted German Gems’ focus toward student and first feature films, one of her favorite components of B and B festivals past. But like any proud parent, she still speaks fondly of her first-born festival, pointing out the big-name film personalities who graced Berlin and Beyond’s stage: Bruno Ganz, Michael Verhoeven, and Wim Wenders — coups that put the event on the map, even in Germany. It won’t ever be quite the same without her, but thanks to Eggers’ persistent efforts over the years, the future of San Francisco’s premiere showcase of German cinema seems assured.