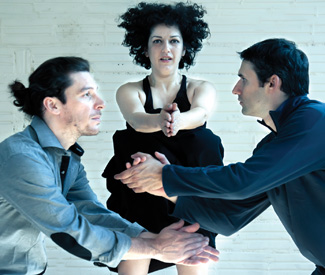 DANCE Watched over by two pink carousel horses, a rainbow. and a big lotus flower, they sway, stomp, and slide even as they chant, clap, and body slap in increasingly complex rhythms. They are SlamDance, Keith Terry’s sextet of musician-dancers, and they are rehearsing their upcoming performance at the fourth International Body Music Festival, held this year at Yerba Buena Center for the Arts.

Last year, the (free) festival took place in São Paulo, Brazil; next October it will happen (also free) in Istanbul, Turkey. “Free performances [are] something we could never do in this country,” Terry ruefully observes. Still, the plan is to have a local festival (2011 tickets start at $25) every other year.

Terry, who organized the first festival in 2008, started out as a percussionist. He was the first drummer for the Jazz Tap Ensemble, and he is a founding member of Berkeley’s Gamelan Sekar Jaya. So the beat has been in his body for a very long time — yet early in his career he changed from “a seated musician to a moving musician,” as he calls himself. Using one’s body as a musical instrument, he says, sometimes is called “body percussion” or “body drumming.” Terry prefers the term “body music” because it includes melodic and harmonic aspects as well as its rhythmic components. SlamDance performers, for instance, use their voices to percussive effect as well as in simple part-singing.

Using your body to make music is pretty basic. We all do it, perhaps starting as toddlers with patty-cake, progressing into clapping games at recess, and ending up as oldsters who play the spoons. Much of these practices go back to folkways rooted in ritualistic endeavors. But there are also innovations: the gumboot dance, for instance, was developed by South African miners early in the 20th century, while African American fraternities popularized a particular form of step-dancing.

Body music is both a communal practice with a sense of freedom even as it demands great discipline and precision. “That’s what makes it fun,” Terry explains. Often it integrates improvisation and fixed passages, not unlike what happens in both hip-hop and jazz.

Noticeable from a dance perspective is the SlamDancers’ slight sway in the torso. “It helps with the breathing,” Terry notes, though he was surprised to see how practices change from culture to culture.

“One of the things that fascinates me about these festivals is how differently these musicians, who come from all over the world, carry themselves. It was one of the most profound experiences with my first body music festival because we are, basically, all just clapping and stepping. It’s definitely a cultural thing. You put a French group next to a Brazilian one and you can immediately see the difference.”

One of the first groups Terry identified with as kindred spirits was Çudamani, an astounding troupe of male dancer-musicians from Bali. They perform kecak, a rhythmic, chanting-and-swaying “monkey dance” that originated in trance rituals. Six of its dancers bring new choreography as part of this year’s International Body Music Festival line-up, which features a total of eleven companies.

Others include the theatrical Cambuyón, from the Canary Islands, which integrates tap and hip-hop into other percussive forms, and Kantu Korpu, which draws on flamenco and tap to translate regional Greek music into motion. Both of these groups are making their US debut. KeKeÇa’s five performers interpret Turkish songs within Near Eastern movement traditions. Fernando Barba from Brazil draws from samba and maracatu; Danny “Slapjazz” Barber is a hambone virtuoso; the Las Vegas-based group Molodi pulls in theater and just about everything with a beat. A gentler soul is Quebec’s Éric Beaudry, who will also team up with a trio of Oakland step dancers.