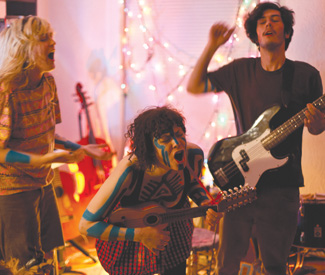 MUSIC In a once-pink house, atop a hill where San Francisco and Daly City collide, freak folk four-piece Little Teeth practices its trash thrash in a small living room decked with tawdry holiday tchotchkes year round, as if suspended in a never-ending Christmas.

When I arrive, pajama-clad vocalist/multi-instrumentalist Sofia Bell is baking Christmas tree-shaped vegan cookies. As she enters the bedroom, she serves percussionist Sean Real and the band’s newest addition, Brian Rodriguez, her freshly baked confections. Her wife, vocalist/multi-instrumentalist Dannie Murrie, is in their bed, watching 16 and Pregnant. When Bell ensures everyone is eating, she gets in the bed and cozies up next to Murrie. The room’s energy shifts when the interview commences.

On New Year’s Eve 2008, after she was introduced to Little Teeth’s music by her boyfriend, Bell saw Tisdall perform solo. His music — simple folky melodies above clamorous creaky piano, banjos, and cellos — made for enchanting chamber folk. “It was like a religious experience. Everyone blacked out of the room. Doves were flying. [There were] huge choruses of kneeling skeletons,” she says, catching her breath. “It was a very dramatic experience for me.”

She also met Murrie that evening. “I saw her come up the stairs. And I will never not remember that ’cause it really [was] like that love at first sight thing,” she says.

To Bell, the music Tisdall and Murrie were making both together as Little Teeth and separately as solo artists was what she had been waiting for her whole life. “I just felt like nothing had ever played the sound of a person — what it felt like to be on the inside in your nervous system running and the voices in your head arguing with you,” she says. “I just felt so completely naked in front of their music.”

So enamored with Tisdall’s music, Bell began cheating on her boyfriend with him. A room opened up in the Pink House — where Murrie resided — when the band was at SXSW. Bell moved in. And upon his return, Tisdall shared a room with Bell.

During what Bell and Murrie call “the golden era,” Bell was experimenting as Stanzamaphone, her solo project, while Murrie was producing Little Teeth’s debut album, Child Bearing Man (Absolutely Kosher). In it, Murrie’s snarling, metallic gruff rises above the banging of pots and pans and wailing of mandolin, accordion, banjo, and cello. When Murrie began working on Stanzamaphone with Bell, they fell in love.

“It was the Chernobyl of the house,” Murrie says, referring to the day she and Bell decided to disclose their feelings for each other with their housemates. “It went the worst way it could have possibly gone. It went the way of hospitals and 5150s” — involuntary 72-hour hold in a psychiatric hospital.

All the while, Bell had developed a gastrointestinal disorder. After her hospitalization, she began to write down what had happened over the past six months. The pared down version of that story was posted to Bandcamp, as the band worked on repairing itself. With sagacious hindsight, in the house frozen in Christmas time, Murrie says, “Our sentence is to face the ghost and do it justice and do it service. And live with it everyday. And live it through our songs.” *