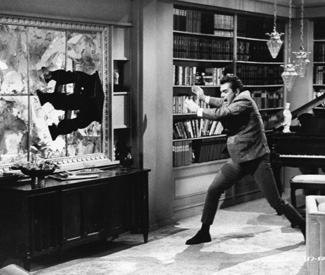 FILM Of all Elliot Lavine’s noir programs for the Roxie, “Not Necessarily Noir” is both the toughest sell and the most creative from a curatorial perspective. There are two programs in this abbreviated “Not Necessarily Noir” run that should have built-in audiences — a slam dunk Joan Crawford double bill of Johnny Guitar (1954) and Female on the Beach (1955), and a full course of Ed Wood — but the terrifically nervous movies at the start of the series do the most to stake out its intuitive terrain.

As a thorough revision of Robert Siodmak’s classic adaptation of the Hemingway story, Don Siegel’s The Killers (1964) is a fine place to begin. Siegel’s remake was initially contracted for television, but that fell through when the director littered the film with mean specks of violence; a sniper sequence seemed in especially poor taste after the Kennedy assassination. If they only knew: in the movie version it’s Ronald Reagan pulling the trigger.

The wild casting combinations are dynamite in Siegel’s hands: the future president and John Cassavetes brawl and killer pair Lee Marvin and Clu Gulager pursue the story of a big heist. Marvin’s hired gun wants to know what made former racecar driver Johnny North (Cassavetes) die without a fight. Gulager’s goofy psychopath needs the suggestion of a million bucks to get interested. Ducking Siodmak’s smooth noir style, Siegel gives us hard daylight, cheap motels, and actors sweating through their makeup. The director approaches fatalism matter-of-factly, leaving the expressionistic language of seduction and madness without much purchase. With characteristic perversity, Siegel has Johnny accuse femme fatale Sheila Farr (Angie Dickinson, a Kennedy friend) of betrayal when his head is wrapped up following an auto accident. It should be an emotional peak and we can’t even see his eyes.

Against the odds of its title, the unjustly obscure Brainstorm (1965) charts a well-plotted crackup. With its glinting surfaces, jazz score, and debauched party scenes, the William Conrad film can evoke a pulp La Dolce Vita (1960) or La Notte (1961). Jim (Jeffrey Hunter) is a chiseled intellectual manning room-sized computers. In a dreamlike prologue, he discovers a beautiful woman (Anne Francis) wrapped in mink in the backseat of her car. She’s unconscious, and her car is parked in the path of a train. After the rescue, Jim finds out she belongs to Jim’s boss Cort Benson (Dana Andrews in a fine menacing turn). A little later Cort finds out the two youngsters have been playing around and uses his power to cast Jim as a lunatic. Jim begins to play along when he realizes it could make for a persuasive alibi for murder.

Brainstorm never ventures into the underworld, but Conrad’s squeezed widescreen framing gives the sense of being underwater. Along with the hard horizontals of modernist offices and passing references to the Nuremberg Trials, the film’s self-conscious tripling of female threat (the traditional femme fatale, a woman psychologist, a hired hand who accuses Jim of lewd phone calls) insinuates deep pathological reserves of noir anxiety. Brainstorm‘s disintegration isn’t quite up to Shock Corridor (1963) and The Manchurian Candidate (1962), but they’re all stirring the same pot.

If Clint Eastwood’s avenging cop in Siegel’s Dirty Harry (1971) was a neo-noir lodestar, his directorial debut of that same year pushed in a different direction. In Play Misty for Me, an extreme amplification of the femme fatale into a castrating bitch (many fatal attractions followed) obscures his character’s masculine code. As Dave, Eastwood appears every bit the New Hollywood playboy driving along the Pacific Coast Highway to his nighttime disc jockey gig. After the show he has a drink with his barkeep friend (Siegel, naturally) and soon looks to pick up a swell-looking babe down the bar (Jessica Walter). Back at her place Evelyn admits she’s the one always calling in with a request for “Misty,” and things only get stickier from there.

Dave grasps at Evelyn’s movie-romance psychosis with the same hard stare reserved for bad dudes in the spaghetti westerns and crime movies, but here this front signals disbelief, frustration, and ineffectuality. Instead of trapping his onscreen persona in the frame, as in the classical noir, Eastwood pictures himself enjoying a false mastery of space. Dave strolls with a good girl in sylvan nature (shades of 1947’s Out of the Past), but the unnervingly distant framings anticipate the knockout moment when Evelyn’s hand strikes menacingly into the foreground of one of these shots. Play Misty for Me isn’t necessarily noir, but Eastwood’s cunning extension of the “deadly is the female” trope doesn’t play nice with the audience’s identification — and that’s maybe the coolest killer of all.