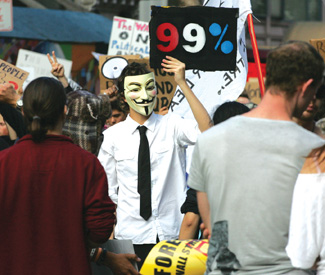 Guy Fawkes’ masks — popularized by the film and graphic novel V for Vendetta — have been the most common face of American resistance to empire, used by the hacktivists of Anonymous and by the Occupy Wall Street protesters in cities across the country. Bay Area costume stores report the masks getting snapped up as soon as they hit the shelves.

Guy Fawkes Day on Nov. 5 — commemorating the day in 1605 when Fawkes was caught with a cache of explosives under the House of Lords — is also the deadline set for a pair of unrelated actions directed at powerful corporations: national banks and Facebook.

Bank Transfer Day calls for people to transfer their money from the huge banking institutions that helped crash the economy and into local credit unions or locally owned banks. It was created as a Facebook event by Central Coast resident Kristen Christian and it went viral, with almost 67,000 people pledging the take part.

“Together we can ensure that these banking institutions will ALWAYS remember the 5th of November!! If the 99% removes our funds from the major banking institutions to nonprofit credit unions on or by this date, we will send a clear message to the 1% that conscious consumers won’t support companies with unethical business practices,” reads the invite.

Meanwhile, Facebook is the target of threats by a splinter group from Anonymous, the leaderless online collective whose hackers have crashed corporate websites in defense of Wikileaks, confronted the Church of Scientology, and organized protesters against BART over police reform and the agency’s decision to cut cell phone service to scuttle a protest, with many wearing the Fawkes mask.

Videos in several languages have proliferated on You Tube, featuring a speaker in a Guy Fawkes mask and electronic voice accusing Facebook of giving corporations and government agencies access to people’s personal information (Facebook did not respond to a request for comment). The videos urge people to close their Facebook accounts by Nov. 5 or risk having the hackers expose their information, urging allies to help “Kill Facebook, for the sake of your own privacy.”

GO DOWN IN HISTORY

“Prepare for a day that will go down in history, Nov. 5, 2011. We are Anonymous. We are legion. We do not forgive. We do not forget. Expect us,” the video closes, using the standard Anonymous tagline.

While many supporters of Anonymous have criticized the Facebook campaign and cast doubts on its chances of success, the system administrator for the AnonyOps.com website told us it is the nature of this movement that small groups can start campaigns of their choosing.

“One thing I do want to state about Anonymous is the fact that it is not a group. As stated above; it is an idea, an idea in which anyone can sail under freely. Think of it as a banner, a banner anyone can use to spread awareness of an issue or topic,” the administrator said.

As for Bank Transfer Day — which has significant support in both the Anonymous and Occupy communities, although it doesn’t identify with either — the AnonyOps administrator wrote, “I can’t speak for Anonymous as a whole about the expected response from banks, but I personally believe that this movement is mostly to send a message. A message that says, ‘We’re fed up of your lies, and we don’t trust you anymore.'”

He also wrote, “November 5th was chosen because it is a rather big day for Anonymous. A lot of Anonymous’ ideas are based around the ideology of Guy Fawkes, and the movie “V for Vendetta”. November 5th marks the day that Guy Fawkes failed to assassinate King James I of England, and this is also the same day in which the people stand up to their Government in the movie, so it marks a special day.”

WHO WAS THIS GUY?

Much of it was the power and timing of the 2005 movie, a dystopian tale of fascism taking root in England, with the state using fear and aggressive police tactics to quiet dissent and control the population. While the film’s hero, V, adopts the Fawkes mask and story, it is his ideology that probably resonates with the modern movement than the historical Fawkes, a Catholic partisan who targeting a Protestant king.

In particular, when V speaks to the people through a television broadcast, his issues and critique on power resonate with young people raised in the post-9/11 world who then watch the financial collapse and saw how crony capitalism protects the powerful at the expense of the powerless.

“The truth is that there is something terribly wrong with this country, isn’t there? If you look about, you witness cruelty, injustice and despotism. But what do you do about it? What can you do? You are but a single individual. How can you possible make any difference? Individuals have no power in this modern world. That is what you’ve been taught because that is what they need you to believe. But it is not true,” V says.

Indeed, the young people of Occupy, Anonymous, and various other nascent political movements are feeling empowered by their successes and the support they’re receiving. In his speech, V calls for everyone to show up in Guy Fawkes masks on Nov. 5 to watch him blow up the House of Lords.

“I have come to offer you a deal,” V says. “If you accept, I will give you a different world. A world without curfews, without soldiers and surveillance systems. A world that is not run by other men but that is run by you. I am offering you a second chance.”

The notion that an idea can ripple through the populace with little organizational support seems to be borne out by Bank Transfer Day, which was announced shortly after Bank of America said it would charge monthly fees on debit cards. Since then, credit unions report a steady uptick in business.

Robin McKenzie from the nonprofit Redwood Credit Union in San Francisco said more than 500 people have opened accounts with the community institution since the announcement, specifically by customers who reported being unhappy with the fees, ethics, and government bailouts of the big banks.

“Our stance on it is: why wait? If they’re interested in moving their money they should do it now,” McKenzie said. “We’ve been seeing a lot of demand from people for honesty and trust, and a lot on the local level…We’re not looking to profit from them, we’re looking to serve them.”