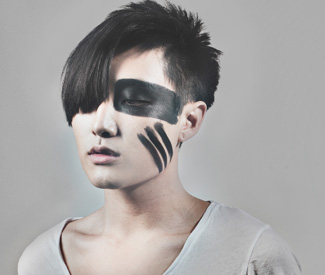 MUSIC I half-expect Jhameel to be sporting face paint whiskers swiped across his cheeks as I walk up to meet him at Cafe Strada near the UC Berkeley campus. Lyrically, he’s inspired by Ben Gibbard, musically by Sufjan Stevens, but aesthetically, it’s early Bowie.

After listening to Jhameel’s latest full-length — The Human Condition, which came out in early 2011 — on repeat, I’ve grown accustomed to seeing his face painted with black streaks like on the cover, or in rainbow stripes like in the frenetic video for the poppy “How Many Lovers.” The rational side of my brain, however, assures me he’ll show up in street clothes.

It’s not like the multi-instrumentalist singer-songwriter wears face paint in real life, or even in all of his output. In reality, his style is gradually morphing. It’s fluid, like the danceable baroque-pop music itself, which Jhameel (his legal name, meaning “beautiful”) composes and creates almost entirely solo. He played every instrument on the album: guitar, piano, bass, drums, violin, cello, trumpet, keyboard. While it’s not his biggest strength (that would be violin), he says he’s most in line with the cello. “I relate to its personality,” he explains, fresh-faced when we spot each other at the cafe wearing similar black pea coats, “It’s got a strong foundation. It’s rooted in the ground. I get a good vibe out it.”

The son of a master violinist (who appeared in the original Fame) Jhameel spent his childhood surrounded by instruments. “I’ve been writing [music] since before I can remember, it’s been like a language for me.” It can be included in the long list of languages he knows, including Spanish, bits of Korean and Chinese, Latin, some Russian, and near fluency in Arabic.

He majored in Arabic at Berkeley and graduated in two years, paying for schooling through ROTC (Reserve Officers’ Training Corps). But something happened during that time, a “cliché self-identity crises” — a seismic shift of values, mentality. He won’t shed too much light on the life change, but he says he had to let go of ROTC. He joined a co-op; the contrasts enlivened his lyrics. “I only have one life to do this. I’d like to have a positive effect on the world.”

In a stroke of DIY music-maker ingenuity, Jhameel this week announced that beginning Nov. 8, he’ll release a new song every week for the next five weeks in a series called Waves. Each song will be accompanied by individual photography, and will be totally free to download. He calls the upcoming series more primal and animalistic then the highly poetic The Human Condition, which is an analysis of emotion.

He does have some experience mining pop culture. Early in this musical journey he covered T-Pain’s “Buy You a Drink” — on violin — and posted it to Youtube. It’s the perfect slice of modern music. Go watch it now. He’s not wearing any fancy face paint, but he’s got style.

(Note: this article has been changed from its original print version to reflect Jhameel’s decision after press time to change the nature of his next release.)

With Company of Thieves, and Motopony