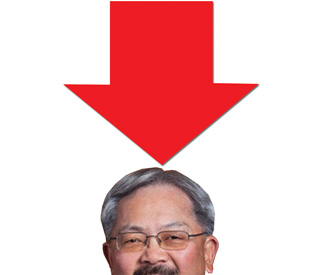 Two weeks ago, the race for mayor of San Francisco seemed in the bag. Mayor Ed Lee was so far ahead in most polls that everyone else looked like an also-ran. A Bay Citizen simulation of ranked-choice voting showed Lee getting enough seconds and thirds to emerge easily as the winner. His approval rating with voters was above 70 percent. The money was pouring in to his campaign and to the coffers of independent expenditure committees promoting him.

But that was before the voter-fraud scandals, OccupySF, Sup. John Avalos appearing on national TV, a controversial veto, Sup. David Chiu getting the endorsement of the San Francisco Chronicle, and an attack on City Attorney Dennis Herrera backfiring.

“It’s changing,” Corey Cook, a political scientist at the University of San Francisco, told us. “I don’t know whether it’s tightening up, but it’s certainly changing.”

One campaign consultant, who asked not to be named, was more blunt: “The Lee campaign is one bad news story away from free-fall.”

That’s not to say Lee is going to lose, or even that he’s anything but the clear front-runner. But over the past week, as Lee has taken a series of hits, supporters of the other candidates — particularly Herrera and Avalos — are starting to wonder: Could somebody else really win?

The answer, of course, is yes — anything can happen in the week before an election. But defeating Mayor Lee will take a confluence of events and strategies that starts with a big progressive turnout — and with voters who don’t like the idea of an incumbent with ties to a corrupt old political machine carefully allocating their three ranked choices.

So far, there’s been no crushing “October surprise” — no single event or revelation that can change the course of the election. And the impact of anything that happens in the next few days will be blunted by the fact that 27,000 absentee ballots have already arrived at the Department of Elections.

By all accounts, Lee’s campaign and the somewhat sketchy independent expenditure groups that are working in parallel, if not in concert, have done an impressive job of identifying and turning out absentee voters. Local consultants from most of the campaigns agree that at least 20 percent of the final turnout will be Chinese voters — and Lee will get at least 75 and as much of 90 percent of that vote.

But as Cook notes, there are still “huge undecideds” for this late in a race. And while Lee was polling above 30 percent a few weeks ago, by most accounts his numbers have been dropping steadily. One recent poll shows him falling 10 points in the past two weeks, leaving him closer to 20 percent than 30 percent.

“If the election were held three weeks from now, he’d lose,” said one consultant who asked not to be identified by name.

What’s happened? A confluence of factors have put the incumbent in a bad light.

The voter-fraud allegations have made headlines and the district attorney is discussing a criminal investigation. Although Lee and his campaign weren’t directly involved — the possibly illegal efforts to steer voters to Lee were run by one of the IEs — the last thing a politician wants to see in the waning days before an election are the words “voter fraud” and “criminal investigation.”

And the allegation — that Lee supporters in Chinatown filled out ballots for absentee voters then collected them for later delivery — play right into Lee’s weakness. While voters generally have good impressions of his work at City Hall, the fact that he’s connected to sleazy operators and tied to the old discredited Brown machine continues to haunt him. And this sort of activity simply re-enforces that perception.

The Leland Yee campaign has taken direct advantage of that perception, releasing a parody of the hagiographic Lee biography written by political consultant Enrique Pearce. “The Real Ed Lee story,” which repeatedly talks of his connections to unethical power brokers, hit the streets this past weekend.

Lee also sided with the San Francisco Chamber of Commerce over a coalition of labor and consumer groups with his veto of legislation by Sup. David Campos that would have prevented employers from draining $50 million per year from health savings accounts set up to comply with city law. Many restaurants even tack a 3-5 percent surcharge onto customers’ bills, making it essentially consumer fraud.

“It’s important for us to take a stance on the issue and say that what the mayor did was wrong,” Campos told us. “It’s a defining issue for us in City Hall.”

Then there’s OccupySF. Nobody knows for sure, but it’s likely that a majority of San Franciscans are at least somewhat sympathetic to the group’s message. And Lee has so far avoided the public relations disaster of Oakland’s crackdown.

But the left is unhappy with Lee’s constant threats to clear out the encampment, and the right is unhappy that he hasn’t sent in the cops already — and even the San Francisco Chronicle has denounced his lack of decisiveness.

Lee put the police on high alert and had them moving around in buses, ready to move in — than at the last minute changed his mind. “What this shows,” said former Supervisor Aaron Peskin, “is that we don’t have a mayor with a firm hand on the tiller.”

Most observers expected that the Chronicle would join the San Francisco Examiner and endorse Lee. But the paper came down on the side of Supervisor David Chiu. Chiu is still running well behind in the polls, and not that many voters follow the Chron’s advice, but the endorsement was a huge boost to his campaign.

Ranked-choice voting puts an interesting twist into all of this. Several consultants and election experts I talked to this week said that Lee would be far more vulnerable in a traditional election. “He would lose a runoff against almost any of the top challengers,” one person said.

But every poll that’s tested the ranked-choice scenario — even recent polls that show Lee faltering — still put him on top after the votes are all tallied and allocated. That’s in part because supporters of candidates who are lower in the pack — Chiu, for example — tend to put Lee as a second or third choice. The Bay Citizen/USF poll showed that when Chiu was eliminated, most of his votes wound up going to Lee.

And, people walking precincts say, there are still some Herrera and even Avalos voters who put Lee second or third. And the only way Avalos — or anyone other than Lee — can win the election is if progressive and independent voters stick to a clear “anyone but Lee” voting strategy.

Avalos is doing well in recent polls; in fact, one shows him ahead of Herrera in first-place votes. Herrera does better when seconds and thirds are counted. Michela Alioto-Pier gets a fair number of first-place votes, which isn’t surprising since she’s one of only three women in the race, the only woman with citywide name recognition — and the only real credible conservative.

Yee and Chiu are both in the running, and Yee has come out strong attacking Lee and is running hard for progressive votes. He showed up at OccupySF the night a police raid was threatened and has been the leading critic of the alleged voter fraud.

Cook says a scenario where somebody beats Lee is still “an inside straight” — but it’s not at all impossible.

If Lee gets 30 percent of the first-place votes, most observers (including his opponents) agree that he’s going to cruise to victory. But if his first-place total is closer to 20 percent, and one or more of the other candidates are within five points, it’s going to be a lot closer.

Here’s the bottom line: If you don’t want to see a repeat of the late 1990s, when Willie Brown was mayor and City Hall was for sale to the highest bidder, vote for anyone but Lee — and use your three votes strategically. If you like John Avalos, put him first — but give your second-place vote to Herrera, who seems positioned right now to be the other strongest challenger. If you like Herrera, give your second to Avalos. If you like Leland Yee or David Chiu, make sure that Avalos and Herrera are also on your slate.

Fill out all three votes. And get your friends and family to the polls. Because turnout is projected to be low, which helps Lee — and the race may well be decided on the basis of who shows up November 8th.