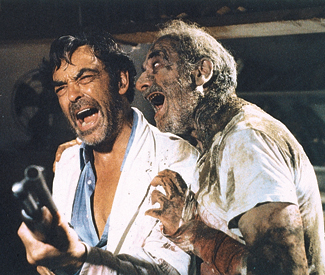 FILM “We are going to eat you!” Accompanied by a close-up shot of a vile, undead head, the iconic poster for Lucio Fulci’s 1979 Zombie clearly delineates the fate of all human flesh. It’s not a threat — it’s a guarantee, oozing with maggots and emphasized with a follow-up promise: “The dead are among us!”

Like all international cult movies of a certain era, Zombie is known by multiple titles; sometimes you’ll see it called Zombie Flesh-Eaters or Zombi 2, since it was released on its Italian home turf as a sequel-in-name-only to George Romero’s 1978 Zombi (better known stateside as Dawn of the Dead). But Fulci’s film is no Romero rip-off; you’ll find zero social commentary or monsters-as-metaphors here. (Sometimes, a zombie is just a zombie.) Fulci, who’d made his name directing salacious giallo films and the occasional spaghetti western, plunged eagerly into full-bore horror; the film’s skin-crawling, buzzing-fly mise-en-scène is jolted throughout with eyeball-popping moments of both terror and what-the-fuckness (key phrase: zombie vs. shark).

As Stephen Thrower notes in Beyond Terror: The Films of Lucio Fulci (an essential tome for its gore-geous photo plates alone), “Fulci’s zombies [are] far more revolting and putrescent than Romero’s.” I’d agree, even with Dawn‘s epic exploding head. But you know what, horror fan? You don’t have to choose. There’s room enough in the world for two zombie kings. It’s been a whole lot easier for Americans to feast on Romero films over the years, though, which is why the Roxie’s three-day screening of Zombie is such cause for excitement. The theatrical re-release is part of a nationwide rollout by Blue Underground, one of the current leaders in the give-trashy-movies-the-classy-DVD-releases-they-deserve movement (the company was founded by William Lustig, director of 1980 cult classic Maniac — speaking of exploding heads).

It’ll hit the screen “in a new 2K High Definition transfer from the original uncut and uncensored camera negative,” so everything will look extra juicy. As of October 25, you can also snatch up Blue Underground’s two-disc “Ultimate Edition,” featuring the new transfer and quite a few extras (though some seem to resemble the extras from Shriek Show’s 2004 two-disc “25th Anniversary” release; diehards will likely repurchase anyway).

If your only exposure to zombies of late has been TV’s The Walking Dead, you need a dose of Zombie. First shot: a gun aimed at the camera; from that moment it never lets up, as big-eyed Tisa Farrow (Mia’s less charismatic sister) travels in search of her missing father to the cursed island of “Matul” with suave newspaper reporter Ian McCulloch (Fulci, dubbed in Noo Yawk-ese, cameos as his editor). Matul happens to be ground zero for the undead apocalypse — filled to the brim with gushing, goregasmic guts. It makes The Walking Dead look like Disneyland. Best Halloween treat ever.