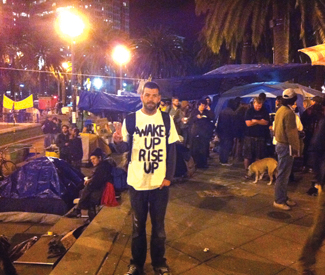 In San Francisco — the first major city to launch a midnight police raid to break up an Occupy encampment, which it repeated Oct. 16 — city officials are struggling with contradictions between claims of supporting the movement but opposing its tactic of occupation. Protesters have reacted to those mixed messages by erecting a growing tent city in defiance of Mayor Ed Lee’s public statements on the issue.

The situation remained fluid at Guardian press time, with OccupySF members unsure when and whether to expect another raid. That sort of standoff has repeated itself in cities around the country. But it seems particularly fraught here in the final weeks of a closely contested mayor’s race as Lee’s stated belief that “a balance is possible” is put to the test.

On Oct. 18, when hundreds of OccupySF protesters and their supporters entered City Hall to testify at the Board of Supervisors hearing — where Lee appeared for the monthly question time and was asked by Sup. Jane Kim to “describe the plan that our offices have been developing” to facilitate the OccupySF movement — it became clear there was no plan and that Lee was standing by the city’s ban on overnight camping.

“From the very beginning, I have fully supported the spirit of the Occupy movement…To those who have come today and who come day after day as part of this movement, let me say now that we stand with you in expressing anger and frustration at the so-called too big to fail and the big financial institutions,” Lee said at the hearing.

“Then don’t send the police in to destroy it,” yelled a woman from the crowd.

“Well, we are working with you,” Lee responded as Board President David Chiu banged his gavel at the interruption and said, “excuse me, you are out of order” and the packed hearing room erupted in shouts and applause at calling out the contradiction in the mayor’s position.

“Well, we are working with you. We are working with you to help raise your voice peacefully and will protect and defend your right to protest and your freedom of speech,” Lee continued, eliciting scattered groans from the crowd. “But that’s not the same thing as pitching tents and lighting fires in public places and parks that are meant for use by everyone in our city. But we can make accommodations and we have, and we can do this while not endangering public safety in any way.”

Afterward, as Lee was surrounded by a scrum of journalists asking about the issue, he made his stand even more clear. “We’re going to draw the line with overnight camping and especially structures,” Lee told reporters. Asked why the police raids have taken place in the middle of the night and why San Francisco is banning practices being allowed in other occupied cities, such as tents and kitchens, he offered only nonresponsive answers before being whisked away by his security detail.

Back inside the hearing room, Sup. John Avalos — who has led efforts to mediate the conflict and prevent police raids — called Lee’s comments “very frustrating. I’m alarmed that he is moving toward nightly standoffs with the Occupy movement.” After watching video of the chaotic Oct. 16 raid, at which several protesters were injured by police officers, Avalos called the situation “unsafe for both sides.”

Six of the 11 supervisors voiced support for OccupySF during the meeting, although Kim — who supports OccupySF and Lee’s mayoral campaign and whose District 6 includes the two protest encampments, in Justin Herman Plaza and outside the Federal Reserve — said at the hearing, “We’re all struggling to figure out the best way to accommodate it.”

Indeed, when the Guardian sought details on “the plan” Kim said she was developing with Lee, her staffers told us there was nothing in writing or major tenets they would convey. And mayoral Press Secretary Christine Falvey told us, “There’s not really a plan, per se, because the movement is so fluid,” although she confirmed that the city would not allow tents or other structures: “The tactic of camping overnight, he does not support.”

But OccupySF protesters were defiant as they streamed to the microphone by the dozens during public comment, decrying the city’s crackdown and claiming the right to occupy public spaces and to have the basic infrastructure to do so. As a woman named Magic proclaimed, “This can be a celebration or a battle, but we will not back down.”

The next afternoon, a large group of OccupySF protesters took their complaints about mistreatment by officers to the Police Commission meeting. Previously, Police Chief Greg Suhr had taken the same stance as Lee, with whom he had consulted before ordering the raid, claiming to support OccupySF but oppose overnight camping (see “Crackdown came from the top,” Oct. 11).

“We will surgically and as best as possible and with as much restraint as possible try to deal with the hazards while protecting people’s First Amendment rights,” Suhr had said, reiterating a ban on tents and infrastructure.

But by the end of the long Police Commission hearing — which was peppered by angry denunciations and chants of “SFPD where is your humanity?” — Suhr seemed to soften his position: “We have no future plans to go into the demonstration. We know that it’s for the long haul.”

OccupySF members interpreted Suhr’s remarks, which went on to raise concerns over potential future public health hazards that a growing encampment might present, as a change in the policy Lee had outlined a day earlier, erupting in the cheer, “Now that’s what I’m talking about!”

In the wake of that meeting, more than 40 tents — including a working kitchen and fully stocked medical tent — have been erected in Justin Herman Plaza, although neither the Police Department nor Mayor’s Office have answered Guardian inquiries seeking to clarify what current city policy is regarding OccupySF. But for now, protesters have declared victory over the city and are happy to be turning their full attention back toward powerful banks, corrupt corporations, and the rest of “the 1 percent.”

“I’m really proud of the OccupySF participants who went to the meeting today,” Zoe D’Hauthuille, a 19-year-old protester, told the Guardian after the Oct. 18 meeting. “I feel like they were really honest and super effective at getting people to realize that we need certain things, and that the city is violating our rights.”