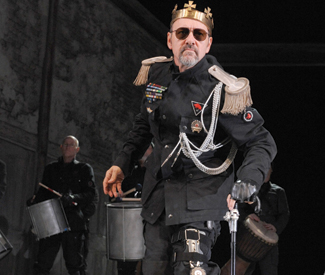 THEATER A single black armchair center stage and one big fat “Now” projected on the back wall signal our anticipation pretty neatly — of a famous opening line, of the famous actor about to utter it, and in the feeling that it is something more than a history play unfolding here, at this moment, in a city and country thoroughly and unprecedentedly “occupied” with political matters. A big, pungent production of Richard III? Yes, now sounds about right.

The production running through this week at the Curran Theatre (courtesy of SHN) originated in June at London’s Old Vic, where its star, Oscar-winning American film actor Kevin Spacey, has served as artistic director since 2003. Its trans-Atlantic tour is part of the Bridge Project (co-produced by the Old Vic, New York’s BAM, and Neal Street Productions), which brings together onstage a mix of American and British theater talent. Director Sam Mendes, also a well-known name in Hollywood since he and Spacey both won Oscars for 1999’s American Beauty, offers (despite some unevenness in tone and persuasiveness across the cast) a generally fleet and sure modern-dress staging of one of Shakespeare’s longest plays, helpfully subdivided with dramatically underscored chapter headings projected during transitions, and building to a rousing climax over the live rumble and pounding of multiple tenor and bass drums.

Tom Piper’s set, meanwhile, presents a cold-looking and always nearly empty room, covered in dull white paint turning to dishwater gray over its weathered surfaces, and lined with doors in a suggestion of multiplying intrigue as well as history’s endless entrances and exits. The subdued lighting (in Paul Pyant’s design) accents the tarnished look of a world beset by obscure plots and creeping doom, while from time to time casting characters’ shadows onto the walls like ulterior selves.

In the title role, Spacey delivers a crowd-spoiling yet seriously potent performance as the quintessence of power-mad ambition at the highest levels of the social hierarchy. Appearing in that center armchair as the play begins, in disheveled modern black-tie evening dress and a paper crown, Spacey’s Richard is a reluctant celebrant in a “weak, piping time of peace,” who not only aspires to reach the throne by ruthlessly doing in all family and familiars in his way, but who takes exquisite pleasure in sharing with the audience the graphic details of the journey. His own party is just beginning, and won’t stop until combined forces wipe King Richard out on Bosworth Field, ending a bloody two-year reign and an English imperial dynasty.

Spacey’s Richard is vocally and physically powerful, well shaped in every detail of its unshapely protagonist-villain. His wooing of Anne (a sharp, sultry Annabel Scholey), for example, in a famous early scene, or his impatient proxy wooing later on of a second wife via the young girl’s mother (the Duchess of York, played commandingly by Haydn Gwynne), are as comically subtle and rich as they are virile and startlingly explosive. A rare moment of self-doubt in Richard, wrestling with a late-blooming attack of conscience, is also beautifully handled.

Spacey’s enjoyably vivid interpretation lies in a compelling blend of sociopathically cool, intellectual charm and an underlying animal drive manifest in the Z-shaped posture of Shakespeare’s physically “unfinished” hunchback. When standing still, Spacey’s Richard balances on a twisted leg bound up in a metal brace and perched on the ball of the foot, his head twisting and jutting, with one arm wrapped in a black leather glove and the other tucked up high like a fledgling wing. But when this incarnate of political malevolence moves, he flies around the stage with the quick and decisive energy of a once-wounded creature long-adapted to its deformity, an angry raptor on a metal cane. It’s that two-sided quality that makes good sense of the play’s moral vision too, which draws so forceful and timely a distinction between citizen-duping outward show and the inner appetites driving a ruling class of cannibals. *