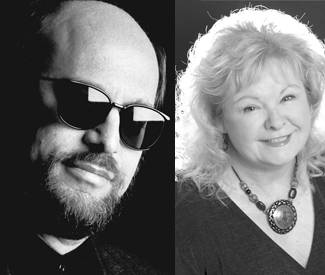 “There are so many popular ghost-hunting apps, software programs, and TV shows out there right now that rely only on the tech side of things — but what people don’t realize is that if you take the human part out of the ghost-hunting equation, you’re really left with nothing. Sure, it may look like your app is detecting some sort of peripheral movement, or the people on TV may be tracking some remote electromagnetic phenomenon. But you have to remember that ghosts were once people, that you’re dealing with human beings. Technology will only take you so far. You need that human sensory and extrasensory contact for the spirit to fully reveal itself as more than just a blip on a screen. You can’t just go take a photo of a ghost with your iPhone!”

Master of Parapsychology, professor at JFK university, and Bay Area ghost detective Loyd Auerbach (www.mindreader.com) is speaking to me over the phone about the book he published earlier this year with psychic Annette Martin, The Ghost Detectives’ Guide to San Francisco, a spooky and involving compendium of the duo’s 16-year investigations into local paranormal phenomenon. Auerbach had just come from a weeklong conference on the paranormal at Atlantic University in Virginia, where hot topics included quantum psychometrics, split beam research, global consciousness projection and convergences, and — his specialties — recurrent research with mediums and parapsychology education.

That’s some heady stuff for a down-to-earth guy who credits comic book geekiness as his gateway to paranormal investigation. “It’s either surprising or not surprising that so many paranormal investigators are comic book geeks and old TV show fanatics,” he says with a laugh. (Auerbach is also a well-known chocolatier: his Haunted By Chocolate line, www.hauntedbychocolate.com, will be featured at Berkeley’s Spun Sugar shop for Halloween.)

Besides the ghost detectives’ indepth sleuthing at places like Alcatraz, the Queen Anne Hotel, and Chinatown, I was particularly intrigued by Auerbach and Martin’s concept of “residual haunting” versus actual haunting. “Residual hauntings are simply traces of emotion or action that clutters the psychic territory of a location — even living people can ‘haunt’ a place residually. A real haunting consists of a complex set of phenomena that naturally involve one or several spirits, but that moves beyond repetitive enactments and into a fuller narrative.”

The ghost detectives do indeed experience fuller narratives — several of them chilling, like the barrage of negative feelings that assault Annette in Chinatown and the echoes of despair filling Alcatraz. And some are more, er, entertaining, like Auerbach’s intimate encounter with a specter named Cayte at the Moss Beach Distillery that’s jokingly referred to as “ghost sex.”

The book was to have kicked off a series exploring Bay Area. Unfortunately, Annette, whose “gift of the white light” brought her a considerable amount of TV and radio fame, passed away in September. “I have so much material from our collaboration, I’m still planning to do something,” Auerbach said. “And to answer your next question: no, I haven’t exactly heard from Annette from the other side. But several of her psychic friends have, and I’m hoping my next project will involve seeking her out.”

ENCOUNTER AT THE PRESIDIO OFFICERS’ CLUB

An excerpt from The Ghost Detectives’ Guide to San Francisco

LOYD I indicated we should move back to the main room, it had large windows looking out toward the bay. In front of the windows was a platform. Annette moved to the platform and windows.

ANNETTE What I felt was a lot of energy, right around here.

I set down the TriField Meter as well as a natural EMF meter, which measures non-tech sources of magnetic and EM fields. The latter has a sound indicator to alert the user when the readings change.

ANNETTE I am going to turn on my tape recorder and see if we can pick up any voices.

Something is registering with me. … She stands at the window, waiting for him. Ah, she’s asking me why he hasn’t come.

[Annette took a few deep breaths and began to channel.]

My name is Annette and this is Loyd. There is nothing to be afraid of. Can you show me something? …

[Annette: She was certainly curious. I was getting her questions intuitively.]

ANNA MARIE Yes, I am from San Francisco. I went to school here, Notre Dame de Victoria and St. Gabriel’s and Mercy High School… Did I like the nuns? Some of them. You spend time in the chapel [at the Presidio]. You feel good there. You want to run and play with the children, but sometimes they get frightened.

LOYD What is your name?

LOYD What is your last name?

LOYD Where were you born?

ANNA MARIE Not in this country. I came as a child. Travelled a long ways…

LOYD How did you travel? By what means of transportation?

ANNA MARIE Mother said by boat. Mother was beautiful. I came back to find her, but she is not here ….

LOYD Do you remember when you came back here?

ANNA MARIE People, many parties … noise … people … men … no ladies. I used to swing on a tree.

LOYD A tree here? [Annette nods.] Were you married?

ANNETTE She’s turned away from me now, she says others come here but not her love, not her man. “Ships, many ships.”

LOYD Annette, can you tell what she is wearing?

ANNETTE Yes, she is wearing this long white dress, with something tied in the center. She has very long hair but there is something tied around her head. Like a white scarf… She looks, she could be 20. She keeps changing, sometimes she looks older…. This is where she is waiting for him.

LOYD The man she loves?

ANNETTE She says she calls him Pugsy, but that wasn’t his real name….She doesn’t want to talk anymore. Anna Marie, can you tell me his real name? “It’s too painful,” she says. It’s alright, it’s alright, we will call him Pugsy.

This is the place where they would meet. There was a big tree, a great big tree with branches that go way up. He put a rope around the branch so that she could swing and they would laugh.

She doesn’t understand why all these people were here. She says that if she stays here, maybe he will find her. She can’t find him…

LOYD What year does she remember being here?

ANNETTE She is stuck here, on her fixation on this man. And there was this tree, like a big oak tree, I saw it so clearly, and laughing and giggling.

LOYD Do you think it was taken down to build this building?

ANNETTE I forgot to mention that I felt closer to the water when I was talking to Anna Marie. Did anything measure on the meter?

LOYD Yes, a couple times when she was speaking through you.

ANNETTE She would come in close to me and then she would back away. At one point is was like we were holding hands. She is very friendly, very loving, but also very sad.