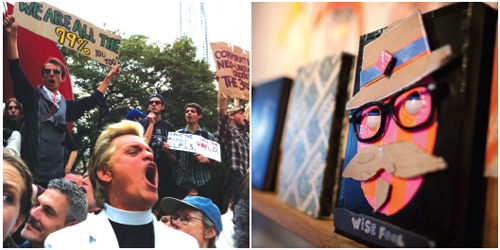 LIT As I watched Occupy Wall Street grow and spread to other cities in recent weeks, I’ve been alternating between reading two books by familiar figures — a pair of fearless entities that have helped pry open public spaces using the simple weapon of creative expression — and I’m struck by the lessons they offer at this strangely hopeful moment in our history.

Together, they’re like a one-two punch to the status quo and to the notion that we’re all essentially prisoners of the existing political and economic systems. They encourage their readers to strive for impossible goals, to be guided by something bigger than our tiny selves, and to embrace failure rather than fearing it. These are the same ideas embodied by protesters occupying the streets of San Francisco and other major U.S. cities, this sense that they have nothing to lose by making a stand now but everything to lose by continuing to be obedient to the powerful forces that seek to dampen their spirits and rob them of their futures.

The Reverend Billy Project: From Rehearsal Hall to Super Mall with the Church of Life After Shopping is by Savitri D and Billy Talen, the couple behind the performance art church that critiques hyper-capitalism by doing exorcisms and other telling rituals in banks, chain stores, and other examples of what they call the “devil monoculture.”

So the Occupy Wall Street movement that began Sept. 17 in their adopted hometown of New York City is right in their sweet spot. They’ve been down there almost every day delivering sermons, songs, and support — Savitri D as the group’s stage manager and creative director and Talen as his alter ego, Rev. Billy, the evangelical pastor of a large flock of creative activists they’re organized into a choir.

“It feels like the culture is breaking open,” Talen told me by phone as he surveyed the scene at Occupy Wall Street. “These kids are really going for it.”

I’ve long been an admirer of their work and I included Billy as a character in my own book, The Tribes of Burning Man: How an Experimental City in the Desert is Shaping the New American Counterculture, along with longtime burner and San Francisco-based showman Chicken John Rinaldi, the author of the other book I’m discussing.

The Book of the IS: Fail…TO WIN! Essays in engineered disperfection was launched by Chicken and the eclectic group of culture-shakers in his orbit during a spectacular free party on Sept. 30. The 111 Minna Gallery contained 50 unique, custom-designed covers to his already well-designed book, selling for a whopping $250 each — and they sold out! Outside, the closed-off alley was filled with variety acts, strange artsy spaces to explore, a buzzing Tesla-coil tree, and hundreds of people.

Both Chicken and Billy have run for mayor in their respective cities, Chicken in 2007 and Billy in 2009, both injecting art and unconventional creativity into their campaigns. Ironically, it is Chicken who discusses his campaign at some length in his book, despite his basic disdain for politics, while Billy and Savitri — whose art is performed in service of political principles they hold dear — don’t include the campaign in their book.

“We believe that the five freedoms of the First Amendment — religion, speech, press, assembly, and petition — that you need to have these freedoms flourish in public spaces, and that has been shut down in New York City since 9/11,” Billy told me from Occupy Wall Street. “We’ve suffered a loss of our public spaces in New York, and to have all these young people open that back up is very exciting.”

But it wasn’t the politics of their books that struck me as much as their sense of possibility and the way they agitate for a new kind of world. Chicken didn’t run for mayor to win or even to make a political statement. He ran because he sees San Francisco as a “city of art and innovation,” and because then-Mayor Gavin Newsom was more focused on keeping the real estate market booming than keeping the city a fun and interesting place.

“No one was stepping up to challenge him, because no one could beat him. It was in the bag. But Gavin didn’t represent San Francisco very well in a few key departments, and I wished that someone would provide a referendum on the values of the city. Or something. Whatever else it was, running for Mayor was an opportunity to bring my shtick to a bigger stage,” Chicken wrote.

And Chicken’s shtick was the show, his raison d’etre, the need to create culture that drove the various pursuits that he chronicles in his book, from his adventures with the Cacophony Society to his touring with Circus Redickuless and the hardcore punk Murder Junkies to piloting a fleet of boats built from garbage to hosting strange spectacles at his Odeon Bar.

“I mean it’s all a show, of course. And all shows are just stories. And in the end, it’s all the same story,” Chicken wrote. And that story is about what it means to be human, to strive for something authentic and important in this mediocre, manufactured culture that corporations create for us, to reach so far for that truth that we fail — in the process touching the divine, or achieving what Chicken calls Severe Comedy — and then to start that process all over again.

“You can never really say you gave your all unless you fail,” Chicken tells me, recognizing that same spirit in the Occupy Wall Street movement. “I think we’re literally witnessing history in the making. This is the dawn of new ideas.”

That same spirit has animated the work of Billy and Savitri, and their book tells stories from their many demonstrations and events from around the world, ping-ponging between their two perspectives on what happened. Some actions are well-planned and meticulously rehearsed, other more impromptu, like leading a group from a talk they gave in Barcelona to a nearby Starbucks to lick all the surfaces and take it into their bodies.

In reading their books, I got the sense that they didn’t always know what they were doing, that they were just acting, trying to stay in motion, to just do something and figure out what it really means later. Chicken even confirmed the observation when we spoke: “I never have any clue what the fuck I’m doing.”

But that’s okay. Maybe a lot the kids on Wall Street and in front of Federal Reserve building in San Francisco don’t know what the fuck they’re doing either. But, in the face of the greed and corruption that plague our economic and political systems, at least they’re doing something. And even if they fail — maybe especially if they fail big — we’re a better and more interesting country because of their efforts.